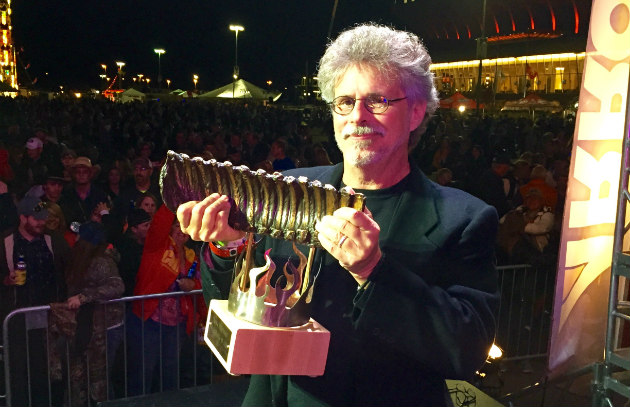 On October 3, the American Royal Association announced the 2015 class of inductees to the Barbecue Hall of Fame. And I was lucky enough to be one of them. The formal induction ceremony took place on the main stage of the American Royal World Series of Barbecue® event at Arrowhead Stadium. So many of you shared your congratulations and good wishes with me on Facebook, Twitter, and BarbecueBible.com, I thought I would share something with you: my remarks at the induction ceremony.

Thank you, American Royal, for this enormous honor. That it takes place in Kansas City, the Mecca of Planet Barbecue, makes the honor even more meaningful.

As I look out at you tonight, I’m reminded of the words of Sir Isaac Newton:

“I stand on the shoulders of giants.”

And as I stand here tonight, I can’t help but marvel at how I got here.

Unlike most of you, I did not grow up on barbecue. I did not descend from a long line of pit masters. No smokers burned in my backyard. When I was growing up, “barbecue” meant a flimsy open grill filled with charcoal and lit with gasoline (which once took the paint off the side of our house). Barbecue sauce was what you marinated the meat in—how else would you get that burnt, coal black crust? The first time I tasted ribs at Gates and burnt ends at Arthur Bryant’s, they came as revelation.

My father wanted me to become a doctor. When I majored in French literature, the poor man questioned my sanity. When I announced I wanted to become a food writer, my family figured I’d starve financially, but at least I’d never go hungry. When I thought about writing my first book, my mentor—the French cooking authority Anne Willan—told me, “Steven, you’ll never make a living writing cookbooks.”

Well, like any rebellious kid, I made it my life’s work to prove them wrong.

Like many of us, I thought that possessing a Y chromosome made me a master griller. It wasn’t until I started traveling Planet Barbecue and writing books about grilling that I realized how little I really knew.

So I want to tell you 10 things I’ve learned in my 20 years writing about barbecue.

I’d like to leave you with one final thought. Where your food comes from matters as much as how you smoke it. When I started writing about barbecue 20 years ago, people spoke of their wood and their pits, their seasonings and techniques. The one thing missing from the discussion was the source of the meat. The new generation of barbecue masters demands local beef, heritage pork, wild seafood, and organic chicken and vegetables. We want to start with clean raw materials and animals raised humanely—and without antibiotics or growth hormones. If we start demanding better ingredients, the food industry will follow.

These ribs are the next best thing to winning the bronze trophy. Get the recipes:
Kansas City-Style Spareribs
Sweet-and-Smoky Barbecue Sauce