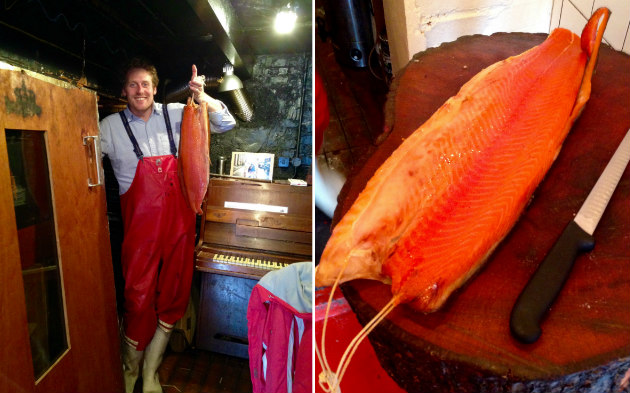 Smoke masters go to extraordinary lengths to perfect their craft, chopping and seasoning their own wood, butchering their own meats, spending sleepless nights tending pits or smokehouses. But as far as I know, only one serenades his smoked salmon with piano music. His name is Ole Hansen of Hansen & Lydersen in London. At six foot three, with long blond hair and piercing blue eyes, he looks more like one of his Viking ancestors than the bespoke salmon master to star chefs and Michelin star restaurants.

I’m not sure I’m ready to add Chopin to my smoked salmon recipe, but after tasting Hansen’s fish, I can’t discount the process either. Extraordinary? Imagine sides of salmon bronzed with juniper and beech smoke, sea salty and bacon-y crispy on the outside, giving way to creamy, velvety, gently smoke-scented fish that’s not quite raw but certainly not cooked in the center. Oily-rich, yet incredibly delicate, with a flavor that changes subtly yet unmistakably as you sample slices cut from the top, center, or bottom of the fillet.

“Smoked salmon transports you,” Hansen says. “One taste of this fish takes me back to fishing trips with my grandfather. We’d lunch on his smoked salmon and bread my mother baked that morning. That was the taste of my childhood.”

Salmon was the last thing on Hansen’s mind when he moved to London to become a sound artist. But he wound up spending most of his time lugging heavy sound equipment to pay for the brief time he could actually compose.

He decided to return to his roots and smoke salmon the way his grandfather did. He rented an old hangar in a gritty row of warehouses and constructed his smokehouse from materials scavenged from building sites. The sum total of his working capital: 30 pounds.

Hansen resolved to use salting and smoking supplies only from family businesses. His fish comes from the icy waters above the Arctic Circle in northern Norway. He cures it with fleur de sel (hand-harvested sea salt) from the west coast of France (the same salt his Viking forebears used to salt cod ten centuries earlier). He hangs the fish vertically for rinsing, drying, and smoking, using twine spun by a fourth generation twine maker. (“When you lay fish on its side, you make it seem like it’s dead.”) The smoke comes from an old potbellied stove situated outside the smoke chamber. A fan pumps in air, which swirls around the hanging salmon. “My grandfather would say that the fish should move around as it smokes,” Hansen explains. “This movement gives the smoked salmon energy—makes it taste alive.” Then there’s the music, which Hansen plays on an upright piano outside the smoke chamber.

Unlike industrially smoked salmon, Hansen’s fish loses roughly 30 percent of its weight in the curing and smoking process. This gives a velvety texture and concentrates its flavor. Each fillet is wrapped in sulfur-free paper from Italy. “My fish never touches plastic,” Hansen says.

Not surprisingly, Hansen has a decidedly different way of slicing smoked salmon. Using a long, slender, razor-sharp knife, he first cuts off the dry edge of the belly. The second cut removes the rib bones. He then makes a series of thin crosswise cuts to the skin, producing short vertical slices 1/4 inch thick. “To experience smoked salmon properly, you need five slices, the first close to the head, the last close to the tail, the others from the fatty midsection,” Hansen says. “The head section is the most smoky; the middle section is the most buttery; the tail section (the muscle exercised most strenuously by the fish) has the firmest texture.”

Get the recipe for Cold Smoked Salmon.