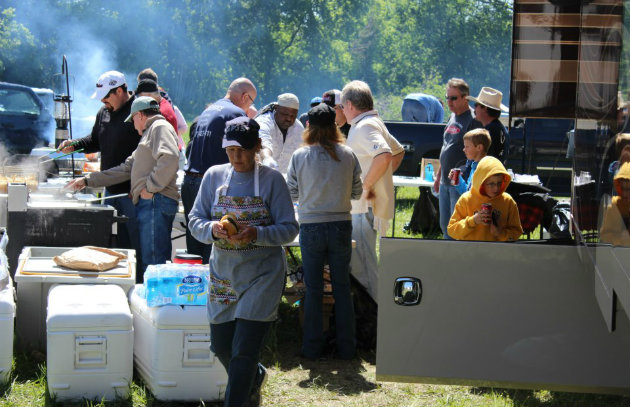 Three years ago this month, I interviewed Jeff Stith, a co-founder with two other competition barbecuers of Operation BBQ Relief. Since 2011, this nonprofit organization has evolved into an emergency response team and has served over 700,000 plates of barbecue to people displaced by tornadoes, wild fires, and even a devastating fertilizer plant explosion. The good this coalition of volunteers—some 3,000 of them—has done is immeasurable. I believe it’s the kind of cause the BarbecueBible.com community could rally around. To donate or to volunteer your time to Operation BBQ Relief, visit their website at www.operationbbqrelief.org.

“Barbecue is a huge community,” Stan Hays tells me. The co-founder and chief executive officer of Operation BBQ Relief (OBR) looks up over a cup of coffee. “We all speak the same language. We all do things to help our community.”

When a ravaging EF5 twister killed 158 people in 2011 in Joplin, Missouri, Stan, a competitive barbecue cook, watched the devastation and saw something besides twisted metal and shredded homes.

We’re sitting in a coffee shop on a gray morning. Drizzle has softened the view through the windows. The cool gray outside the cafe looks like what the skies must have looked like just before the tornado slashed through Joplin.

After seeing the destruction in Joplin, Stan started calling his buddies—fellow competitors and others in the barbecue community. They rallied together and hauled equipment and supplies to Joplin that evening hoping to lend a hand.

He thought they’d be gone for three or four days. When Stan and his cohorts returned from Joplin they set about the formal process of establishing OBR as a nonprofit organization to continue serving those in need in the wake of a disaster. His collection of barbecue buddies and new friends have all since pitched in and continued to volunteer or participate in the nonprofit.

Since those early days, the OBR team has grown into a mission that has registered close to 3,000 volunteers and has served more than 700,000 meals spread across 173 deployments.

“It makes us feel relieved that there are other people out there who care,” said Eric, an EMT with the Kirkland Community Fire Protection District in western Illinois. The 28-year-old had been serving as an emergency worker for less than two years when an EF4 tornado slammed through Fairdale, Illinois on April 9, 2015.

Soon after the tornado ripped across the area, Operation BBQ Relief volunteers gathered and set up shop in the Kirkland Fire Department where Eric was based. “They were very friendly and hospitable,” Eric remembered. “There was so much going on that day. It was a little overwhelming.”

That tornado killed two people and leveled the town of less than 200 residents. Around 17 OBR volunteers rolled up to the rural area about 100 miles west of Chicago. With the help of local volunteers, they set up a cooking area and got busy serving up heaps of barbecued pork butt and other fixings out of the fire station to emergency workers and those affected by the devastation—a scene that has been repeated over and over by OBR volunteers.

Stan says the operation has become fairly smooth. They use funds from their outreach to purchase supplies or rely on donations from corporate sponsors who supply meat products like pork butt, sausage, chicken or hamburger depending on what is most inexpensive and available. They are able to mobilize quickly and respond with efficiency. They’ve amassed a fleet of equipment including eleven trailers (some with storage and bunk beds and bathrooms); plus generators; a super shot truck with hot and cold sides; and a tilt skillet capable of cooking up massive quantities of sausage, ground beef or even pasta.

We’re wrapping up coffee. Stan peeks outside this rainy morning, surveying the skies a bit. He shows me his pickup. It fills up the space between the yellow lines and sticks out just a bit more than the average vehicle. It’s able to tow just about anything to a disaster. He’s looking to add more vehicles to tow some of the trailers in order to meet the demand of their mission. He says, however, the need is always for more volunteers and to grow the network.

“The feeling you get providing warm barbecue meals to those in need is amazing,” he says. “I can’t think of another way to say it.”

For more information on how you can support Operation BBQ Relief, visit www.operationbbqrelief.org.