Menu for a Spectacular 4th of July Barbecue 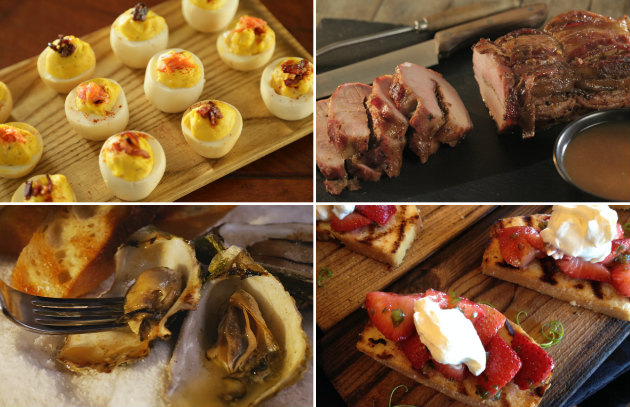 I’ve been on tour since early May promoting my latest book, Project Smoke. It’s been exhausting, but exhilarating. Atlanta. Austin. Boston. Denver. New York. Miami. Phoenix. Philadelphia. Portland. Salt Lake City. And so on. My first thought most mornings is, “Where am I?”

But on the morning of July 4, I know exactly where I’ll be—in my own bed. Because Independence Day is a command performance in the Raichlen family. (Seriously, no excuses.) Every year, we host a barbecue at our Martha’s Vineyard home, then ferry from Chappaquiddick to Edgartown for a late afternoon parade on Main Street—the kind that makes your eyes tear up and your heart pound with patriotism—followed by fireworks over the harbor after sunset. If it sounds idyllic, it is.

The menu I envision—though I have time to tweak it—takes its inspiration not only from Project Smoke (both the book and the television show by the same name, now airing on American Public Television), but reprises favorites from Barbecue University, just completed at the Broadmoor in Colorado Springs. Chappaquiddick Smoked Oysters: Shell middens on Martha’s Vineyard and Chappaquiddick evidence the appetite ancient island dwellers had for oysters. And no wonder: oysters from nearby Katama Bay are plump, briny, and sweet, needing nothing more than a kiss of wood smoke to bring out the best in them. Buy whatever oyster species is local or freshest. (Hopefully, you’ve made friends with your fishmonger.) A shellfish rack is a big help, allowing you to cradle as many as 18 oysters, clams, or mussels before transferring them en masse to and from the grill or smoker. You can balance the bivalves between the rungs of the grill rack, but chances are good some will overcook and others will tip, spilling their precious juices. Smoked Deviled Eggs: Long an American picnic staple, deviled eggs are even better when the eggs (already hard-cooked) are peeled and briefly smoked before halving. Fifteen to 20 minutes of hot-smoking or 1 hour of cold-smoking is usually enough to impart flavor; longer, and the whites tend to get rubbery. Alternatively, you can arrange the peeled eggs—halved, this time—in a ceramic baking dish. Cover the dish with plastic wrap, leaving one small corner open. Insert the tube from a handheld smoking device (such as the Smoking Gun). Light the smoker according to the manufacturer’s directions, then add smoke to the baking dish. Remove the hose and seal the plastic wrap. Let the eggs steep in the smoke for 4 minutes. Repeat if desired. Continue with the recipe as usual. Bourbon and Brown Sugar Smoked Pork Loin with Nashville Sweet Barbecue Sauce: Originally published in my book BBQ USA, I had forgotten how good this treatment of pork loin—one of the most economical cuts at the meat counter—is until I put it on the BBQ U menu. Flavor is added at every opportunity: the loin is butterflied, and the inside seasoned with a homemade rub, mustard, brown sugar, and bourbon. More rub goes on the outside, then several strips of bacon are tied around the roast with butcher’s string. (You could also do a bacon weave if you’re feeling ambitious.) The package is then indirect grilled with hickory smoke until the meat is tender and the bacon’s golden-brown. A bourbon and brown sugar glaze, applied with a silicone basting brush toward the end of cooking, ups the food porn factor. Smoked Potato Salad: Potato salad is as sacred to Fourth of July celebrations as red, white, and blue buntings. My smoked version will make you rethink this American classic. (The mayonnaise-based dressing, enlivened with chopped olives, cornichons, and capers, is also excellent on grilled seafood.) Blue potatoes are now available in many specialty markets or through www.melissas.com and would make an appropriate addition to the holiday table. The potatoes can be smoked a day ahead, if desired. My sturdy mesh grilling basket will corral the potatoes while allowing smoke to circulate around them. Grilled Pound Cake with Berry Salsa and Tequila-Whipped Cream: Over the years, this has been one of the most popular recipes among students of BBQ U. Pound cake is sliced, brushed with melted butter, then lightly grilled. Minced jalapeño and fresh lime juice temper the sweetness of the berry salsa, and a splash of tequila gives the whipped cream sex appeal. (Extra points if you smoke the cream before whipping on a conventional smoker or using a handheld smoker.) In keeping with the red, white, and blue theme, include blueberries or blackberries in the salsa.