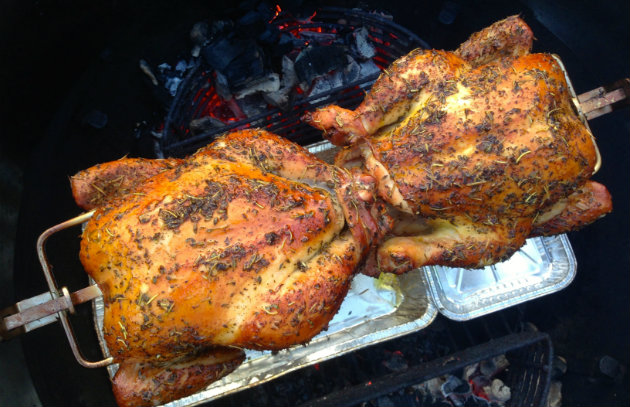 Have you ever gone out to eat only to be ambushed by a dish so memorable that it haunts your dreams, daring you to try to replicate it at home?

My obsession (not counting a dalliance with Korean tacos) is Peruvian chicken, aka pollo a la brasa, or simply “charcoal chicken.” I adore its crisp, flavorful, smoke-kissed skin, its juicy flesh and the herbaceous, positively addictive green sauce that accompanies it.

I first encountered this version of spit-roasted chicken in the Washington D.C. exurb of McLean, Virginia, seemingly the epicenter in the U.S. of the Peruvian chicken phenomenon. But I’ve also eaten it in New York, Boston, and improbably, in L.A.’s Koreatown.

Tragically for me, none of these establishments are within easy driving distance. Thus began a decade-long crusade to learn the secrets of home-cooked Peruvian chicken, which I’ll share below.

Peru has a Swiss national to thank for its most popular chicken dish, which has its own day on the Peruvian calendar (July 21). In the 1950s, Swiss expat-turned-chicken-farmer Roger Schuler was on the verge of losing everything. In desperation, he set up four tables in his farm home and advertised “all you can eat” spit-roasted chicken for only 5 soles (about $1.95) to local workers. Today, La Granja Azul (The Blue Farm) seats 450 patrons at its hacienda on the outskirts of Lima; chicken—still “all-you-can-eat”—is served with thick-cut fries and a green salad. And the price is 55 soles ($16.25).

When Peruvians emigrated to North America in the 1970s and 1980s, they brought this culinary treasure with them.

If you have eaten Peruvian chicken at a pollería in Lima, you have likely noticed differences between the indigenous and Anglicized versions. The former is usually a smaller, younger bird, and while not aggressively seasoned, it often features two ingredients that are not well-known in the U.S.: ají amarillo paste, a yellow chile pepper paste with a fruity taste and mild to medium spice; and huacatay (wah-kah-tay) paste, a distinctive-tasting herb compote also known as black mint. The chicken was traditionally spit-roasted over charcoal from the now-endangered algarrobo tree.

So without further ado, here is my hard-won advice for making mouthwatering and authentic Peruvian chicken in your own backyard:

Get the recipe for Peruvian-Style Spit-Roasted Chicken with Green Sauce.