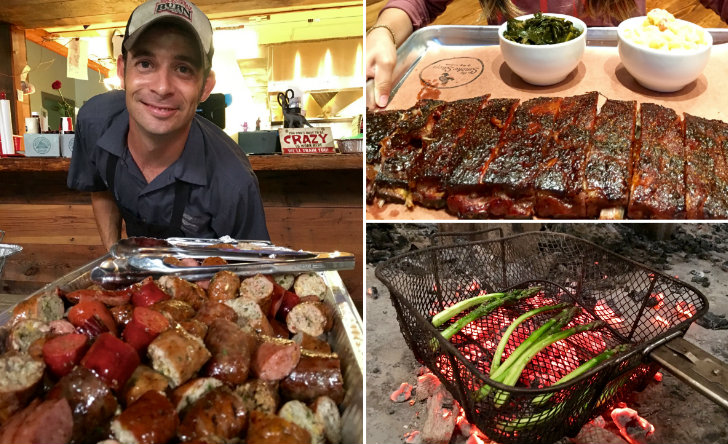 It’s tough work, as the cliche goes, but someone has to do it. Part of my job—one of the best parts—is keeping tabs on the best new barbecue and grill restaurants. 2016 has been a banner year for live-fire cooking. The Grillworks wood burner has become the new stove in restaurants from New York to California. Elsewhere, chefs have taken a giant step backwards, installing wood-burning hearths that would have been at home in colonial kitchens. Here are a dozen of my favorite new restaurants for 2016. Boston/Cambridge: The Smoke Shop
It’s about time. Boston chef Andy Husbands has had a lifelong obsession with barbecue, and after numerous barbecue contest wins (including the Jack Daniel’s for his brisket) and several excellent cookbooks (his Wicked Good Barbecue is a must read), he finally decided to open a barbecue restaurant. Look for pull-apart-tender baby backs, textbook pulled pork and monster beef plate ribs at this Cambridge smoke emporium, and don’t miss the crispy grits fries and hot links with homemade pimiento cheese. Chicago: Leña Brava
No one on the planet knows more about Mexican cuisine than Chicago chef Rick Bayless, and his latest restaurant (the name literally means “Angry Fire”) specializes in modern Baja-inspired wood fire cooking. From the wood-burning oven come black cod al pastor and chicken a la leña, while the wood-fired grill turns out smoky octopus carnitas and a monster 32-ounce tomahawk steak. Smoky mezcal-based cocktails (try the Last Piña) and jewel-box-like ceviches round out a menu equally remarkable for its breadth and bold flavors. Chicago: Roister
“The restaurant is the kitchen. The kitchen is the restaurant.” With this motto, Chicago über chef Grant Achatz opened this equally über hip restaurant in Chicago’s Meatpacking District, with a wood-burning hearth as its focal point. The menu is eclectic enough to include smoked oysters, hearth-baked lasagna, pork butt with a dark and stormy glaze, and grade A-5 Japanese Wagyu beef with sea urchin. If this sounds too avant garde, there’s always a wood-grilled, 30-day aged beef porterhouse. The noise level rivals that of an F-16 engine at takeoff. By the way, if you haven’t seen it already, watch Grant Achatz’s amazing life story on Netflix, Chef’s Table. Los Angeles: Charcoal
When Michelin-starred fine dining chef Josiah Citrin (owner of Mélisse in Santa Monica) decided to open his second restaurant, he built the concept around charcoal. It fires a pair of Big Green Eggs, a Spanish Josper oven, and an open grill where virtually all the cooking at Charcoal is done. Sure, you could order the 35-day aged Sonoma lamb shoulder with coriander and honey or the 21-day aged Liberty duck (you should), but the dish that most stands out is lowly cabbage—the whole head roasted caveman-style in the embers and served with sumac-scented yogurt.

Miami: Kyu
This lively restaurant in Miami’s Wynwood Art District is my favorite eating place in Miami. Chef Michael Lewis deftly combines Asian flavors with American smoke and fire, seasoning his smoked Wagyu brisket with sashimi pepper and serving it Vietnamese style, with lettuce leaves for wrapping, Asian barbecue sauces for dipping, and—a first for this writer—chopsticks to eat it. The Asian barbecue theme continues with grilled asparagus with miso and bacon and whole maitake mushrooms grilled with ginger and soy. The dining room is industrial modern; the duck burnt ends are out of this world.

Miami: Quinto la Huella
There are many places to sit at this sleek new South American chophouse (run by the owners of the famous La Huella in José Ignacio, Uruguay) at the equally slick new East Hotel in Brickell Village—at sprawling communal tables inside or on the airy spacious terrace. But you’ll find me at the U-shaped asado bar in front of the massive parrilla, oak-burning open grill. The grass-fed picanha and other steaks are imported from Uruguay; the grilled fresh local snapper comes with salsa criolla (South American creole sauce), and the crusty mollejas (grilled sweetbreads) are out of this world. Wash them down with one of South America’s best-kept wine secrets: a Tannat from Uruguay.

Montreal: Foxy
Olive & Gourmando is one of my favorite breakfast/lunch spots in Montreal, so when the owners opened their new wood grill restaurant, Foxy, in the trendy Griffintown neighborhood, I leapt on my Bixi (municipal bike) to try it. Smoked crème fraiche sauces the charcoal-grilled trout; a tomato and burnt onion salad counterpoints the Mt. Laurier hanger steak; and the feta cheese on the wood-oven-baked flatbread with nectarines is marinated right in house. Clever cocktails; big flavored food from a Grillworks wood-burning grill; and in the summertime, sidewalk seating. What more could you ask for? New Orleans: Primitivo
Historically, New Orleans cuisine has been more about simmering and sautéing than grilling, but chefs Adolfo Garcia, Jared Ralls, and Ronald Copeland have made a massive wood-burning grill, oven, and smoker the focal point of their Oretha Castle Haley Boulevard restaurant in emerging Central City. Yes, you can order excellent coal-grilled prime rib and smoked spareribs, but what interests me is Primitivo’s use of alternative live-fire cooking methods, like the ember-roasted shrimp (cooked caveman style on the coals) and string-roasted duck breast.

New York: Le Coq Rico
OK, I know, this is not, strictly speaking, a grill restaurant, but the house specialty—spit-roasted chicken—comes off an iconic French live-fire rotisserie. This isn’t just any rotisserie chicken. Former Michelin 3-star chef Antoine Westermann has gone to extraordinary lengths to source Brune Landaise birds raised by Mennonite farmers for a full 110 days (most chickens are processed at 40 to 60 days), producing such rich soulful flavors, you’ll feel like you’re eating chicken for the first time. Go with lots of people so you can try the Rohan Farm duck and Catskill guinea fowl, too. The macaroni au gratin sets a new standard for mac and cheese; the thick-cut frites rank among the best in Manhattan. Enjoy them in a chic feather-decorated bistro dining room, and don’t forget to book your table several weeks ahead of time. Tulsa: Burn Co. Barbeque
From the moment chefs Adam Myers and Robby Corcoran opened their roadhouse-barbecue joint, Burn Co. Barbeque has played to standing-room-only crowds. It’s easy to understand why: homemade smoked sausages, smoked bologna and baby backs, and of course, the dish that made them famous: the fatty (think three kinds of sausage and cheese wrapped and smoke-roasted in bacon—you’ll find the recipe in Project Smoke.) Their new location more than doubled the seating and size of the kitchen, adding room for a butcher shop, but messieurs Myers and Corcoran still do all their cooking on what may be America’s most singular grill/smoker: the Hasty-Bake, made right here in Oklahoma. Washington, D.C.: The Dabney
When chef Jeremiah Langhorne opened this cozy tavern in Blagden Alley in the heart of the nation’s capital, he designed his kitchen around a piece of cooking equipment that would have been at home in Colonial Williamsburg: a huge raised wood-burning hearth. The cooking may be primal—wood fire grilling, roasting, and yes, charring vegetables in grill baskets directly on the embers. But the Mid-Atlantic-inspired menu is thoroughly modern, with the likes of whole grilled black bass, BBQ Beaver Creek quail, and winter squash cooked in the fire. Did YOU have a favorite new smoke and fire restaurant this year? Please share it with us on the Barbecue Board, or my Facebook page.