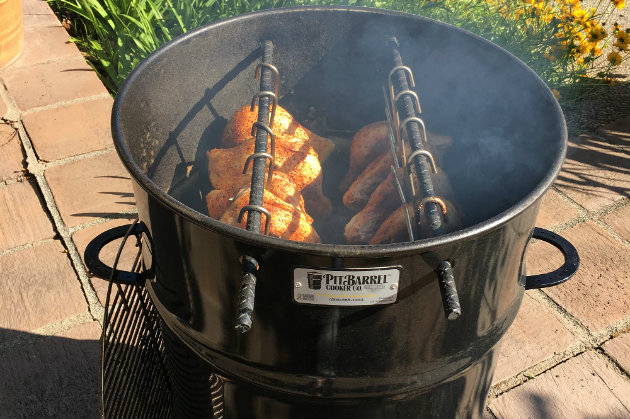 Ease of use: A

Our recommendation: A great combination grill/smoker/charcoal-fired oven guaranteed to deliver great results to the rawest beginner, but high performance enough for a serious griller or smoker. 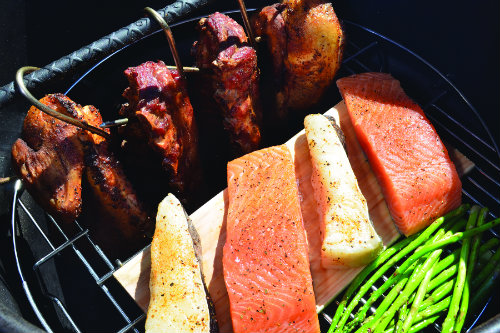 You know you’ve “arrived” when the barbecue community assigns an affectionate acronym to your grill or smoker—BGE (Big Green Egg), WSM (Weber Smokey Mountain), and now, PBC (Pit Barrel Cooker). Or when sales go in a few short years from thousands to millions.

Speaking of acronyms, we have to invoke just one more in order to tell the story of the Pit Barrel Cooker: UDS, aka “ugly drum smoker.” Do-it-yourselfers—even competition barbecuers—have been fabricating them for years. Former Marine and company founder Noah Glanville was inspired by the crude smokers he and his fellow soldiers improvised from the plentiful 55-gallon drums they found in Iraq and Afghanistan. After burning out the petroleum, he recalls, “We’d build a fire at the bottom and suspend the meat over it from wire clothes hangers.” That’s how the idea for the business was born.

Steven and I first met Noah and his wife, Amber, in 2011 when they sent one of the early models of the PBC to Barbecue University in Colorado Springs, and later to the set of Project Smoke. At the time, the cookers were being made in Strasburg, a small town about 30 miles east of Denver. It was amusing to see how much attention this humble cooker—still only $299 including shipping for the continental U.S.—received from our students, despite being in the company of shiny stainless steel supergrills that cost thousands—even tens of thousands of dollars. We’re not surprised the PBC now has a cult following.

Upon his return to the States, Glanville battled Post Traumatic Stress Disorder by developing a business plan for the smokers, which he decided to call the “Pit Barrel Cooker.” He built 29 prototypes, finally settling on one made from a new 30-gallon lidded drum. The design is simple: A raised charcoal basket sits at the bottom. Oxygen enters the cooking chamber via a 3-inch hole with an adjustable cover. (Depending on your elevation, you basically set it and forget it.) Four parallel ¾-inch holes near the top of the drum accommodate two sturdy rebar rods; the meat hangs vertically from them on hooks. Alternatively, you can rest the meat on a grill grate (included), especially handy for direct grilling.

In a touch of whimsy, Glanville chose real horseshoes for handles on the sides and lid. Be careful: They get hot. Horseshoes were originally used to elevate the smoker too, but have since been changed to a more durable three-point barrel stand (giving the bottom a few inches of clearance, but you should still put pavers or fire-resistant grill mats underneath the unit). 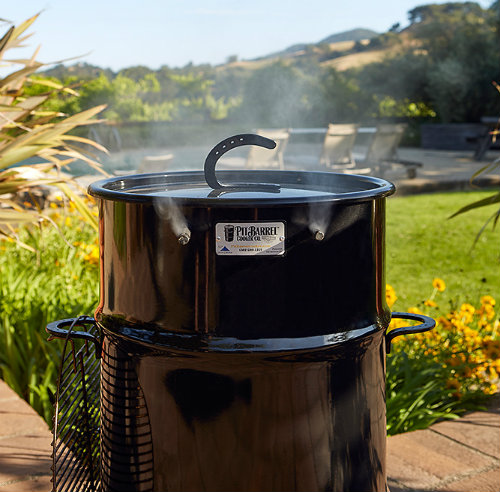 Inside the cooker is where the real magic happens.

“The design may seem simple, but it’s completely self-regulating,” Glanville explains. “We don’t have vents or thermostats. Once you light it, it does all the work for you.” This means keeping the oxygen levels low to create an environment where the meat juices and fat drip on the coals without flare-ups. (So that’s why meat, like ribs or beef tenderloin, can hang so close to the fire without burning.)

The closed environment also seals in moisture. You may be surprised, as we were, to find that the Pit Barrel Cooker has no water pan or drip pan. When the dripping meat juices hit the fire, they turn into what Glanville calls a “smoke fog” to flavor the meat.

Because the lid fits tightly when smoking or indirect grilling, the trapped air inside the cooker keeps circulating from bottom to top as it does in a convection oven. (You can leave the lid off for higher temperature direct grilling on a removable grill grate.) This means food generally cooks faster. A rack of ribs, for example, might cook to perfection in 3 to 3-1/2 hours versus 5 to 6 hours in a conventional smoker. Also, the temperature inside the cooker runs a little hotter—about 270 degrees in smoking mode, 30 to 40 degrees higher than usual smoking temperatures. But in our experience, this helps the meat, like ribs, pork shoulder, or brisket, develop good bark.

The Pit Barrel Cooker arrives fully assembled and ready to use. Set-up is super easy.

To begin, fill your charcoal basket level with briquettes (Glanville recommends Kingsford brand), remove 1/4 of them (40 briquettes) and place in your chimney starter, light the coals with the lid off and let burn for 12-15 minutes for elevations between sea level and 2,000 feet (at all other elevations let your coals burn for 20 minutes). Once these are lit pour them onto your unlit coals, place the lid on, and cook immediately. Add unsoaked wood chips to the coals if desired. Arrange the food on the hooks (use two for extra security) and hang from the rods.

Unless you’re embarking on a very long cook (more than 6 hours), there should be no need to replenish the fuel.

Not content to rest on his laurels, Glanville moved production in 2014 from Colorado to California (he and his family currently live in Kentucky) and now manufactures the units out of heavier steel—18-gauge versus 20-gauge. The handsome outside is now porcelain enamel, more durable than the powder coating that was used originally. He has also developed a line of useful accessories which we’ll cover in a future blog post. 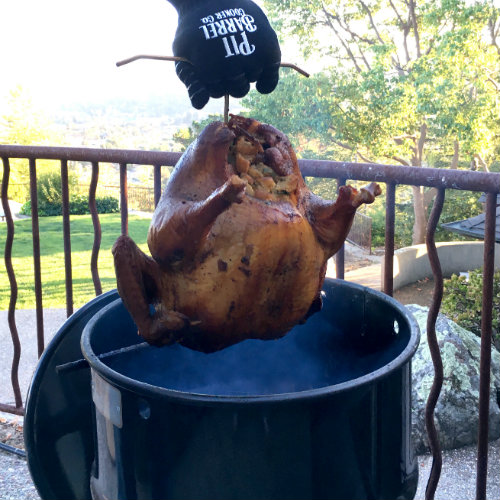 And should you have any questions about the PBC, know that Glanville takes customer service very seriously. In fact, he includes his personal cell phone number with every shipment. What other company does that?

Here are Glanville’s specific recommendations for using the PBC.

For more information or to order this workhorse of a cooker, click here.