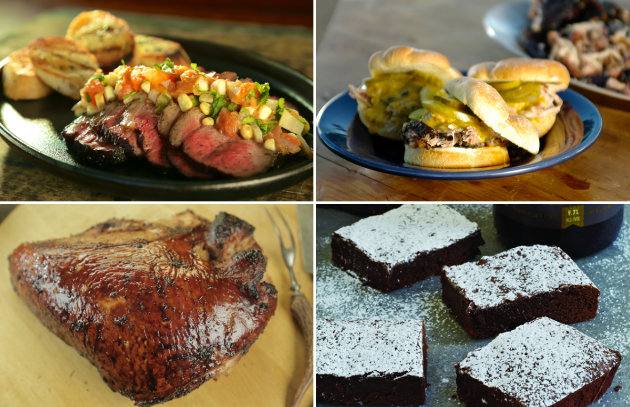 Last week, we gave you a preview of our Super Bowl playbook—strategies for feeding ravenous sports fans who’ve been invited to your house for Sunday’s big game. Today, we’re making good on our promise to share more amazing Raichlen recipes for what is now the second biggest eating holiday after Thanksgiving.

Truth be told, there were so many contenders for this year’s Super Bowl menu that it was difficult to narrow the field.

Like a parent of multiple children, Steven always avoids answering when forced to name his favorite recipes from the thousands he’s authored. I, on the other hand, have compiled a secret list of MVPs from more than a decade’s worth of recipe testing sessions. Here are some of my top Super Bowl picks: Cousin Dave’s Chocolate Chipotle Ribs: Yes, there really is a Cousin Dave. Dr. David Raichlen is a professor of anthropology at the University of Arizona and an accomplished pit master. First published in Steven’s book, Best Ribs Ever, this recipe delivers mole-like flavors that are both bold and nuanced, the perfect ratio of heat (chipotles) to sweet (chocolate). Your guests will go wild for these pork bones.

Buffa-Que Wings: With a 6-7 record this past season, it’s safe to say the Buffalo Bills don’t have skin in Super Bowl LI. But there’s no reason not to serve our always popular take on Buffalo wings (grilled, not fried) at your bash. For a twist, try Steven’s Buffa-Que Shrimp, which subs jumbo shrimp for wings. And don’t count on leftovers.

Citrus-Smoked Turkey Breast: This is not only an economical dish—turkey is reasonably priced after the holidays—but it can be smoked a day or two ahead of game day. Turkey breast soaks for 24 hours in a marinade shot through with the bright flavors of fresh fennel and whole citrus fruits before being smoked to burnished perfection over fruitwood. Chill, slice thinly, and serve on interesting bread or rolls with an array of condiments.

Pulled Pork Sandwiches with Mustard Slaw and Mustard Barbecue Sauce: We’re appalled by the number of recipes that are published pre-Super Bowl for pulled pork prepared start to finish in a countertop slow cooker. Where’s the smoke? Where’s the fire? Here’s the real deal, folks: pork shoulder slow-smoked over hickory wood until it’s tender enough to pull into meaty shreds and served on buns with a tangy mustard-based slaw and barbecue sauce. Score extra points by smoking a big pot of beans.

Reverse-Seared Tri-Tip with Smoked Tomato Salsa: Once little known outside of Santa Maria, California, this boomerang-shaped cut of beef is finally beginning to turn up east of the Mississippi. It usually weighs between 2 and 2-1/2 pounds with almost no waste. Best when cooked to medium-rare, it should be thinly sliced against the grain on a sharp diagonal. Traditionally served with salsa, grilled garlic bread, a green salad, and pinquito or pinto beans.

Yard-Long Smoked Bratwurst Sandwich: The centerpiece of your Super Bowl spread could be this impressive and colorful brat sandwich. You can even indirect grill (this prevents flare-ups) the brats a few hours ahead of time; rewarm the brats and grilled peppers and onions before assembling the sandwich. Serve kraut, German mustard, and maybe Smoked Potato Salad on the side.

Smoke-Roasted Potato Skins: Oil medium-size russet potatoes with olive or vegetable oil and indirect grill using smoking chips or chunks at 400 degrees until soft, 60 to 75 minutes. Transfer to a rimmed baking sheet. Slice each in half lengthwise. Scoop out the potato with a spoon leaving a shell that is about 1/3-inch thick. (Reserve the scooped potato for another use.) Brush the inside of the shell with melted butter and season with your favorite barbecue rub. Return to the grill until the potato shell begins to brown, 15 to 20 minutes. Top with grated cheddar, cooked crumbled bacon, and sliced green onions and cook until the cheese melts. We wouldn’t say no to a squirt of sriracha or hot sauce.

Belgian Beer Brownies: Rarely do we feature a recipe that isn’t cooked over live fire. But these brownies, fortified with ale or stout, are so good, so Super Bowl worthy, that we’re willing to make an exception. (Actually, if you own a pellet grill, you could set the temperature to 350 degrees and bake the brownies as directed. Cherry pellets would be our first choice of fuel.)

We hope we’ve inspired your Super Bowl menu. We’d love to know what you’ll be serving at your party—tell us on Facebook, Twitter, or the Barbecue Board.