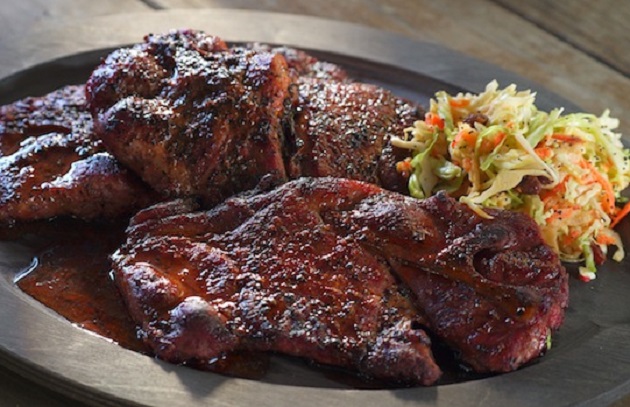 As the summer kicks into high gear and temperatures soar, the best way to beat the heat is . . . to join it. Fiery foods make you sweat, and perspiration is the body’s natural cooling mechanism.

Fiery foods are enjoyed in hundreds of the world’s top food cultures. Indeed, people in some of the warmest climates across Planet Barbecue eat some of the spiciest food. Here, to challenge your inner fire-eater, are some of the most fiery dishes on the world’s barbecue trail. Just be sure to keep a glass of cold beer (or better yet milk—dairy products best tame capsiacin’s heat!) within easy reach when you fire up your grill.

Fire-Eater Chicken Wings
Wherever there’s smoke, there’s fire—you have to try these chicken wings, electrified with a triple-blast of heat in the form of cayenne pepper, fresh red jalapenos, and a generous dose of hot sauce.

Jerk Chicken in the Style of Yallahs
As anyone who has eaten real-deal Jamaican jerk can tell you, it hurts. Smoke gets in your eyes and Scotch bonnet chiles scorch your gullet with a sweet heat that blooms in your mouth rather than bludgeons. Combine them with allspice, fresh thyme, garlic, scallions, and other ingredients to form a fiery paste in which to marinate the chicken. For the adventurous palate, leave the chile seeds in for maximum heat. Xni Pec aka “Dog’s Snout” Salsa
The world’s most colorfully named salsa—xni pec (pronounced shnee pek)—is also one of the hottest. Xni is Mayan for dog, pec for nose or snout. Just why it’s got this name is a matter of debate. Perhaps it’s a reference to its biting heat, or possibly because it makes your nose run. You can serve this fiery salsa with Yucatecan dishes such as tikin xix (achiote-marinated grilled snapper) and pok chuk (brined grilled pork), and it is otherwise excellent with all manner of grilled seafood, poultry, or pork. For the truly daring, simply serve the sauce in a dipping bowl with chips.

Tandoori Lamb with Hell’s Fury Hot Sauce and Raita
The Hell’s Fury hot sauce derives its heat from Scotch bonnet chiles and mustard, balanced by the musky sweetness of fresh mango. The overall effect is rather like eating a peach, taking a whiff of turpentine (mango has a turpentine-y aroma), then biting a high voltage cable. Combining the Hell’s Fury sauce with the tandoori marinated lamb makes for a fiery explosion of flavor on your taste buds, soothingly cooled by the raita sauce. My New Shrimp Cocktail
I’ve never understood the popularity of the conventional shrimp cocktail. After all, boiling is the worst way to cook shrimp—it removes, not adds, flavor and produces a rubbery texture. And cocktail sauce made by mixing ketchup and bottled prepared horseradish is hardly what you’d call heroic. This shrimp cocktail starts with spice-crusted shrimp, which you sear in a skillet or under the broiler. The sauce gets a double dose of heat from grated horseradish and chipotle peppers. Now that’s a shrimp cocktail.

Monroe County Pork Steaks with Spicy Vinegar Dip
A specialty of Monroe County, Kentucky, these pork shoulder steaks are basted with an explosively spicy vinegar dip while being directly grilled over hot coals. Just before serving, the pork steaks are then dunked into the warm spicy vinegar dip to fully coat them in the sauce. Gluttons for punishment can dip their pork steaks twice as well as spoon a little extra on top before serving. If you need something to tame the heat, serve the dish with coleslaw.

The next time you find yourself thinking that it’s too hot out for a spicy meal, embrace the heat, fight fire with fire, and feel the burn!