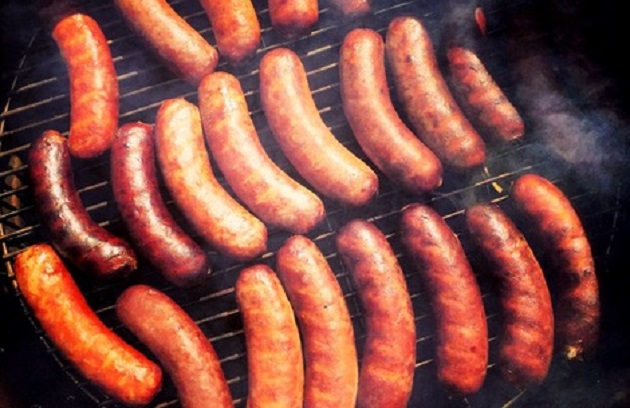 Bratwurst have become a staple of American cuisine, with grilled brats topping the list of favorite summer foods for many. So much have brats made their impression in this country, we now have a National Bratwurst Day dedicated to this tube-shaped food. August 16th is the official day – our friends at Johnsonville have even created a storybook character dedicated to this celebration and titled the day Bratsgiving. How will YOU be celebrating?

Here are some facts about the history of brats to add to your appreciation of this national favorite:

In Germany, there are 42 recognized varieties, most distinguished by their size and the spices used to flavor them. There is even a bratwurst museum in the village of Holzhausen.

Bratwurst from the central German state of Thuringia was the object, in 1432, of one of the first documented food purity laws: Rancid pork, meat other than pork, and parasites were expressly forbidden in its production.

One of the most popular varieties of bratwurst in Germany is the short, finger-thin, marjoram-scented Nürnberger Rostbratwurst, which was first mentioned in print in 1313. Legend has it that a local judge was sentenced to life imprisonment for revealing a political secret, and for the rest of his dungeon-bound life, his family slipped him two of these diminutive sausages through the keyhole of his cell each day. The best way to enjoy Nurnberger Rostbratwurst today is grilled over a pinecone fire.

Brats (the word rhymes with cots, not cats) were introduced to the U.S. by German and Austrian immigrants in the mid-19th century.

What makes a brat a brat? In general terms, there’s the meat (pork; pork and beef; or pork and veal), the grind (coarse), the casing (natural), and the seasonings (which include salt and pepper and sweet spices, like mace or nutmeg).

Always sold fresh (bratwurst are neither cured nor smoked), brats are practically a religion in Wisconsin, especially in the self-anointed “Bratwurst Capital of the World,” Sheboygan. Locals grill them over charcoal and eat them on a special hard-crusted, soft-crumbed roll called a semmel, with brown German mustard, dill pickles, and an optional flourish of diced onions. In this town, it’s considered sacrilege to serve brats on anything resembling a hot dog bun. But you might get away with it in Green Bay or Madison.

Mandatory fare for tailgaters in the Badger State are “double brats” — two brats served on the aforementioned semmel (preferably baked in a brick hearth oven as they are at Sheboygan’s City Bakery) or kaiser roll with condiments.

Milwaukee’s Miller Park, home to the Brewers, is the only baseball stadium in the country that sells more sausages than hot dogs, according to the National Hot Dog and Sausage Council.

Johnsonville Sausage, LLC, has been spreading the brat gospel in the U.S. since 1945, when butcher turned sausage mogul Ralph F. Stayer began making bratwurst from a century-old family recipe. The company is still family owned, and is the largest sausage maker by revenue in the America. It also sells its products in 39 other countries.

To test a brat or any grilled sausage for doneness, insert the probe of an instant read thermometer through the end of a brat toward the center. The internal temperature should be 160 degrees F. Here are some of my favorite ways to serve brats:

The bratwurst “hot tub” which arose to meet a dire need of Packers’ fans and other Wisconsin sports fanatics: how to grill the brats before the kickoff or during halftime and keep them warm and moist so you can enjoy them during the game. If you live in the Badger State, you’re surely familiar with the procedure, and if you don’t, it will quickly become part of your repertory.

When grilling for a crowd — set up the grill for indirect grilling and line up brats by the dozens in tight formation down the center of the grate over drip pans. Toss fistfuls of beer-soaked hickory chips on the coals and close the lid. The brats come off the grill a half hour later bronzed with hickory smoke and snappy crackling-crisp casings. Supernaturally juicy and not a single one split, burned, or caused the sort of volcanic flare-ups you get when you direct grill bratwurst and other fatty fresh sausages.