The Impossible Burger: Coming to a Grill Near You? 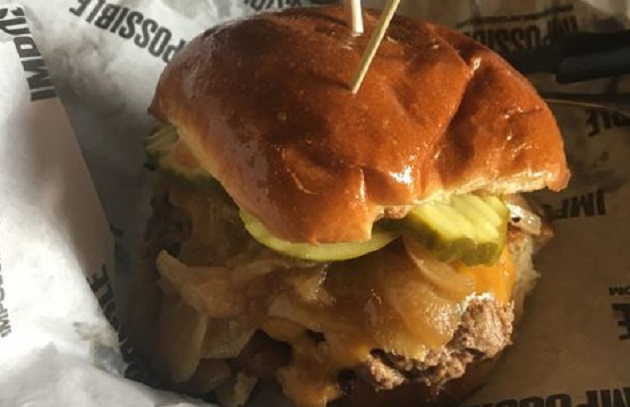 I cheated on Fat Doug yesterday.

Instead of my usual all-beef burger topped with griddled pastrami, Swiss cheese, and coleslaw (the “Fat Doug), I ordered the “Impossible Burger,” the new vegetarian patty that’s been getting a lot of attention in the food press lately. It was recently added to the menu at B Spot, a local gastropub owned by Iron Chef Michael Symon. If the famously carnivorous Symon thinks the faux meat patty is worthy, I reasoned, it’s worth checking out. (He called it a “game-changer” in a recent interview in the Cleveland Plain Dealer.) Steven agreed, texting an emphatic “YES” when I offered to take one for the team.

Still, I was skeptical. I very nearly ordered my usual as back-up in case the Impossible didn’t live up to its hype. Turns out it wasn’t necessary.

The Impossible Burger is the first product of Silicon Valley-based Impossible Foods. Five years in development, it was created to look, taste, and smell like real meat. It’s actually a high-tech composite of wheat protein, potato protein, coconut oil, and heme—a molecule extracted from yeast cultures. The latter contains iron and gives the burger its beefy, minerally taste.

According to the company website, the burger was not developed to satisfy vegetarians who continue to crave animal protein. (Although these poor souls are certainly beneficiaries.) Instead, it’s intended to appeal to people who care about the environment, animal welfare, and the sustainability of the world’s resources. A pop-up card on each table at B Spot claims the plant-based burger uses 95 percent less land, 74 percent less water, and produces 87 percent lower greenhouse gas emissions. As an added incentive, the burgers also have fewer calories, more protein, zero cholesterol, and less fat than a patty made from 80/20 ground beef. By 2035, Impossible Foods hopes to create plant-based substitutes for all animal proteins including chicken, pork, and seafood.

A small flag and special wax paper underneath it were all that distinguished the burger from that of my dining companion. The bun even glistened with fat—olive oil, our waitress informed me, rather than the standard melted beef fat. To satisfy real vegetarians—not posers like myself—the faux beef burgers are grilled on a separate flattop, she said. I cut the burger in half to conduct a thorough visual appraisal. It looked like a real burger—well, mostly. The differences were subtle. The texture was coarser, looser, almost like ground pot roast. Unfortunately, my burger was a bit overcooked, so I didn’t witness any of the beet juice the burger’s creators use to mimic the blood you’d expect to see when biting into a medium-rare beef patty. (Since the Impossible Burger had been added to the menu only days before, it’s possible B Spots cooks hadn’t quite gotten the hang of griddling these leaner doppelgangers.) But the flavor was very good. You could, I think, serve these at a cookout and no one would be the wiser.

At this time, Impossible Burgers are only offered at select restaurants. B Spot was one of the first restaurants in the Midwest to add the burgers, priced at $9.99, to their menu. Current locations are listed on the company’s website. Impossible Foods recently moved into a new production facility, and once it’s running at capacity, expects to churn out about 4 million burgers a month. So it’s likely they’ll soon begin turning up, like the Beyond Burger, in the frozen food section of supermarkets. I was tempted to order a couple of raw Impossible Burgers so I could grill them over charcoal, but doubted B Spot would sell them to me. But they might. Which is a reason to go back, ask, and make amends with my beloved Fat Doug.