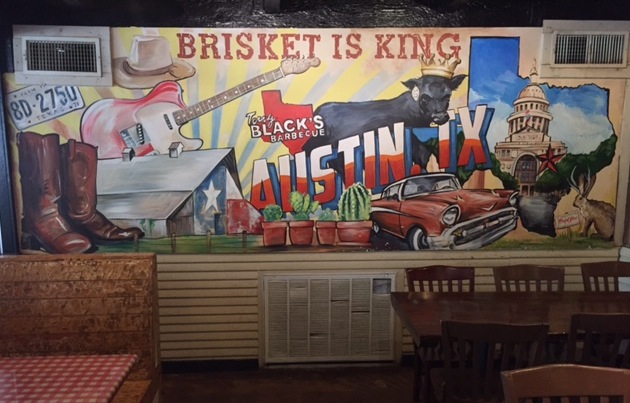 From time to time we offer guest blogs on Barbecuebible.com and this one comes especially close to home.   It was written by my cousin, Larry Hoffman.   A musician and composer, Larry goes to Austin once a year for the Eastern Kings Blues Festival, and he always checks in with “Cousin Steven” to ask where he should eat.   Over the years, he’s established his barbecue bona fides, so I asked him to write a blog on his discoveries this year.   If you’re interested in learning more about his music, check out his website: larryhoffmanmusic.com

First off, I need to say: I’m a music man and have been so all my life.  I am not a professional “foodie,” like my cousin, Steven Raichlen. I just dig BBQ.   After my third visit to explore the riches of Austin’s barbecue pits, I am humbled that Steven asked me to share my impressions.

Turns out that the hotel I’ve used is only a few blocks from Franklin Barbecue, the well-known epicenter of Austin’s BBQ world. Even I  had heard about it before my first visit, and was prepared to jump in line and wait…and wait.  But when finally I was served, the first bite of brisket justified the three-hour stand. Yes, the ribs and pulled pork, were also sublime but the brisket…the brisket…!  And so, during my first two visits to this barbecue mecca, I hit the line at Franklin’s before I’d even unpacked. But this year, just as I was excitedly and hungrily preparing to head down Branch Street’s short, tree-lined walk to the tail of Franklin’s line, I was told that there had recently been a fire: Franklin’s was closed, and no one seemed to know when they would reopen. Estimates varying from two weeks to seven months swirled like so many embers around Austin. The damaged site was devastating to see. How the mighty hath fallen…at least for now. (Update from Steven: It’s been reported that Franklin Barbecue could reopen using a temporary smokehouse as early as the second week in October.)

A CLOSE SECOND? AND ANOTHER SURPRISE Making a repeat visit to another of Cousin Steven’s recommended spots, I set my Google map to La Barbecue and drove on, craving the sight of the yellow food truck that had provided me with BBQ that I swore was every bit as good as Franklin’s (except of course for the brisket…that brisket). Looking for the truck on the left, my phone app commanded me to instead find my destination a few blocks up, on the right. Getting out of the car I saw no pit and no signage—but there was a line, and that told me I had probably come to the right place. But what was this? The people were waiting to go inside to order the food.  La Barbecue had hooked up with a grocery store!  There was outdoor seating on the porch and on the sides of the structure, as well as an indoor eating space, eerily like a smaller Franklin’s in its color scheme and layout. The whole thing really worked for me, though. And, from the lunch I had (pulled pork, brisket, and ribs), the change had not lowered the bar(becue)! Excuse the pun. Top-notch ’que as usual.

ANOTHER CRAFTY SPOT IN THE HIERARCHY: MICKLETHWAIT CRAFT MEATS Michlethwait Craft Meats. Say it fast. This place is clearly deserving of a top-shelf nomination. I talked to a number of Austin residents, and very few had even heard of Micklethwait, aka MCM—a humble food truck nestled in the woods, bordering a suburban parking lot, and hosting just enough picnic tables to sustain a discerning, moderate-size crowd. This was my third visit, and I have to say it’s always been excellent. Their meats taste a little different, though I haven’t been able to pinpoint why.

While in line, one has a clear view of the meats. A screen separates the “waiting hungry” from the chef, who, on request, is happy to expound on the preparation of the meal or discuss the fascinating history of the Austin BBQ scene, the stuff of family intrigues and warring dynasties.

The ribs were as great as I remembered them, and the pulled pork was especially tasty—made even tastier by the electrifying sauce.   The brisket was fine, too, though perhaps a little tougher than my last visit.   Of course, I’m always comparing brisket to that first bite at Franklin’s.   All in all, a great find, with lines a little less intimidating than at the aforementioned establishments.

Striking out on my own, I tried out a few other places I had heard about. “We do not feel that pulled pork is indigenous to Texas barbecue,”  the young man stated haughtily as he sliced my brisket, appearing to read from a hidden teleprompter.

I nearly shouted, “But Senator!”

I was impressed with this spot.  Everything was good. Not much waiting as the cafeteria-style line is well thought-out: You’re able to choose your sides while waiting to order meat.   Plenty of indoor and outdoor seating.

1) Delectable chopped beef (what a novel way to handle brisket);
2) Tangy and tender pork ribs;
3) Brisket that fell a hair short of Franklin’s (don’t they all), but was still damn tasty.

Lastly, desserts here are more than an afterthought.   I couldn’t choose between the sweet peach cobbler and creamy banana pudding, so yes, I had both.

I hate to be negative, but I have to say that the one disappointment in my barbecue crawl was Freedman’s, which scores highly in the current version of “Austin’s best BBQ.”

The somewhat skimpy portions of ribs, pork, and brisket all had a sameness of taste that I found disturbing, and I was not impressed with the barbecue sauce, either (only one was type was offered). I liked the food well enough, but felt that the meats fell short of the hype. However, the meal ended on a high note: the smoked banana pudding was highly creative and extremely tasty—that alone made the visit worthwhile.

Catering to the University of Texas students, Freedman’s is more of a college whiskey bar than a BBQ specialty house, so I guess you could cut it a break on that point. And to be fair, friends of mine who dined there on another day liked it a lot, so maybe I came at the wrong time or on the wrong day. The staff is very friendly and obliging as well.