How to Grill or Smoke the Perfect Roast Chicken 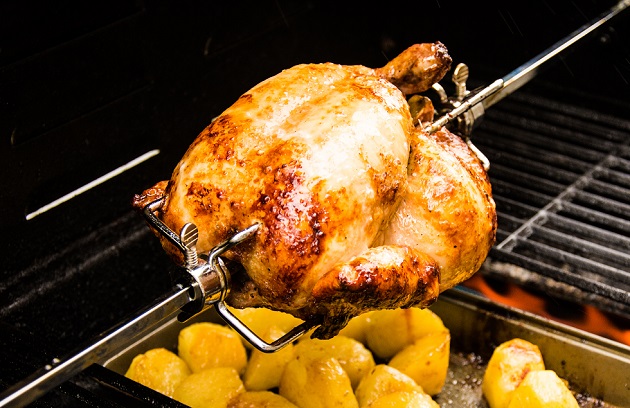 Most of us have a mental photo gallery of the roast chickens we’ve eaten in our lifetimes, especially if they were standouts. For me, there are the homegrown birds (free-range before it was cool) that starred in my mother’s Sunday dinners, emerging at 6 o’clock sharp fresh from the oven and a speckled enamelware roaster. There was a humble chicken that cooked, suspended from a spinning string, near the glowing embers of a campfire. And a wildly extravagant truffle- and butter-enhanced roast chicken a date ordered when we dined at New York’s Lespinasse—now closed. (Because apparently charging $150 for a roast chicken is not a good business plan.)

Today, nearly all the chickens in my life are cooked over live-fire, usually on a Weber kettle grill. But there are so many ways it can be done. Here is a summary, plus our tips for superlative roast chicken.

Indirect grilling: If grilling over a charcoal fire, mound the charcoal on opposite sides of the grill separated by a disposable drip pan. Arrange the food to be grilled on the center section of the grill grate, not directly over the heat. Close the grill lid. (If cooking on a gas grill, light the outside burners and place the food on the grill grate over the unlit center burner.) Try to maintain a temperature of 350 to 400 degrees; a 3 to 5 pound chicken will cook in 1 to 1 1/2 hours. An indirect grill set-up is similar to an oven.

Smoke-roasting: Set up your grill for indirect grilling as directed above. Soak 1 1/2 cups of smoking chips in water or another flavorful liquid, then drain. Divide the chips between the mounds of coals. Or substitute a chunk of hardwood (unsoaked) for the wood chips.

Rotisserie: Sometimes called spit-roasting, this is a great way to roast a whole chicken. The bird cooks evenly and is practically self-basting. If your grill did not come with a rotisserie unit, many grill manufacturers (such as Weber) sell them as an aftermarket item.

Smoking: This term refers to chicken that has been cooked low and slow at smoking temperatures—anywhere between 225 and 275 degrees. The meat is deeply smoky and appeals to many people. There is just one problem: The skin is rubbery. This happens because the temperature isn’t high enough to render the fat in the chicken skin. Solve the problem by adopting a 2-part cooking process. Smoke the chicken for 45 minutes using soaked wood chips or unsoaked wood chunks, then finish the chicken indirectly (see above) at 375 degrees. (If you must, you can even finish the bird in a preheated oven.) This delivers smoky flavor and crisp, golden brown skin—the best of both worlds.

Beer-canning: In this novel method, popularized by Steven’s book Beer-Can Chicken a whole chicken is enthroned on a half-empty beer, soda can, or beer can chicken roaster and roasted indirectly at medium-high temperatures. For more on beer can chicken (including a recipe), click here.

Spatchcocking: Unheard of 10 years ago, the internet is awash with photos of spatchcocked (butterflied) chickens and turkeys. The birds cook faster, and the interior is exposed to more fire and smoke. To spatchcock a bird, use kitchen shears or a sharp knife to remove the backbone. Turn the chicken over and press it flat. Steven also likes to make a slit in the loose skin below each thigh, then slips the ends of the drumsticks into the slits. (Save the backbone for chicken stock.)

Splayed: Similar to spatchcocking, but easier. Using a sharp knife, slice through the thigh joint, then twist the leg/thigh portions until they lay flat on the grill, but are still connected to the bird. This exposes the dark meat, which takes longer to cook than the breasts, to more heat and smoke.

Chicken under a brick: Called pollo al mattone in Tuscany, this chicken—either halved or spatchcocked (see above)—is weighted with a foil-covered brick, a cast-iron skillet, a grill press, or a salt slab. Unlike most whole chickens, the bird is cooked over medium-low to medium-heat. Because it’s weighted, the chicken develops extra-crisp skin and cooks fairly quickly, meaning the meat stays juicy.

Chicken on a string: A method mostly known only to outdoorsmen, a trussed chicken (or other cleaned fowl) is suspended from a sturdy string in front of a mature fire with glowing embers. The chicken will typically spin on its own in the drafts from the fire, but you can help it along by manually spinning it as necessary. This method can also be used on the hearth of an indoor fireplace.

Salt-crusted chicken: This is a technique championed by celebrity chef Francis Mallmann, the author of Seven Fires. Though it requires a staggering amount of kosher salt (about 9 pounds), the chicken that emerges from the hardened salt crust—is superbly seasoned and incredibly moist. For a recipe, see Planet Barbecue, page 363.

AND FINALLY, OUR TIPS FOR PERFECT ROAST CHICKEN: