Grill to Thrill: Cavemanning (Cooking in the Embers) 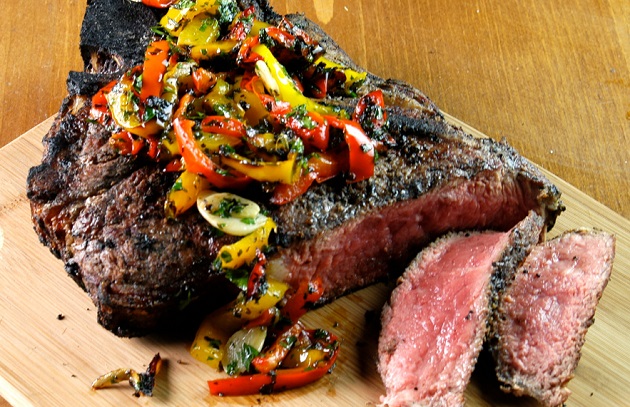 Some of the best moments in life occur when we’re not completely in control. Zip-lining. Falling in love. Live-fire cooking.

As an industry, grilling and barbecuing seem to be moving toward the “set it and forget it” mentality, marketing grills and smokers that have more in common with kitchen appliances than the primal cooking fires that have sustained mankind for millennia.

Don’t lose touch with that powerful, seductive, unpredictable, sometimes violent element. Remember the thrill, when you were a child, of waving an impaled marshmallow too close to the flames of a campfire, setting it alight? And then discovering, once extinguished, how good the char made the marshmallow taste? Recapture that experience by cooking directly in the embers, a method Steven calls “cavemanning.”

It’s quick, it’s fun, and it’s a great technique for winter. Just one chimney of natural lump charcoal or natural briquettes is all you need. (You can even caveman in your wood-burning fireplace.)

Early in our working relationship, Steven acquainted me with the benefits of nestling certain vegetables—onions, yams, eggplant, sweet corn, and others—in the coals to cook. The outside blackens from the intense heat, while the interior softens and becomes supernaturally sweet. But I was skeptical when, on the set of Primal Grill (the TV show that preceded Project Smoke), he threw thick T-bone steaks right onto the glowing embers of a fire we’d built in a large kettle grill. He turned them once, and in less than 6 minutes, retrieved four gorgeous T-bones, each cooked to a perfect medium-rare with a crusty, steakhouse-worthy char. While they rested, he sizzled sliced jalapeno peppers, sliced garlic, cilantro, and olive oil in a cast-iron skillet (balanced on the embers), then poured the mixture over the meat. Heaven on the end of a fork. Find his recipe for Caveman T-Bones with Hellfire Hot Sauce or watch Steven’s demo.

Cavemanning features prominently in his latest book, Project Fire, which will be released in April. (You can preorder it here.)

In the meantime, here’s the information you need to get started:

• Build a fire of wood or natural lump charcoal or hardwood briquettes. (Note: Both Weber and Kalamazoo Gourmet sell the latter. Do not substitute briquettes made with petroleum products as your food will be coming in direct contact with the fuel.)

• Using a grill hoe or garden hoe, rake the coals into an even layer. Fan the embers with a folded newspaper to blow off any loose ash. Wearing protective grill gloves and using long-handled tongs, arrange the food directly on top of the coals.

• As always, don’t abandon your post. Proteins and small and/or tender vegetables (see below) cook quickly, usually in 3 to 6 minutes. Larger, denser vegetables, such as cabbage, potatoes, beets, and squash, take longer. Use a thin metal or bamboo skewer to check for doneness: it should penetrate them easily. Remove any really burnt skin or outer layers (think onions, cabbage) before serving. • With a stiff-bristled brush, knock any clinging embers or ash off the food (do a thorough inspection) and transfer to a heatproof platter or other heatproof surface.

• Smaller pieces of food, such as shrimp in the shell, green beans, pearl onions, fiddlehead ferns, etc., can be corralled in a grill basket or grill wok placed directly on the fire.

• Proteins of an even thickness—steaks, pork chops, and lamb chops, for example—generally work best for cavemanning. Don’t try this with a whole chicken.

• Vegetables without protective skins can be wrapped in heavy-duty aluminum foil before cooking.