The Campaign for Real Barbecue 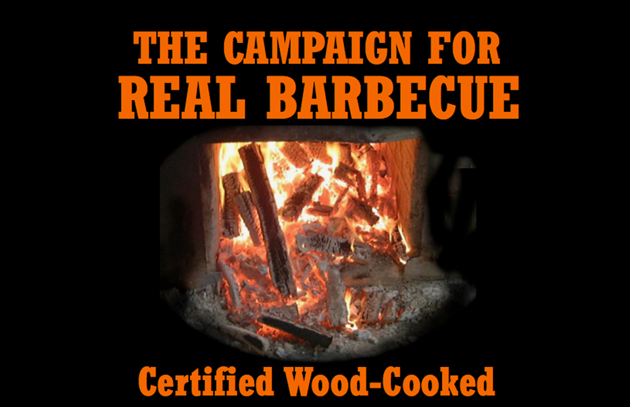 A spectre is haunting the South—the spectre of smokeless “barbecue.” Consider the case of North Carolina, where the situation is particularly grave.

Ever since early colonial days “barbecuing” has meant cooking meat over hardwood coals, and in North Carolina “barbecue,” as a noun, eventually came to mean whole hogs or pork shoulders cooked that way. By the middle of the twentieth century North Carolina was recognized as the center of one of the nation’s major barbecue regions, and barbecue was central to the state’s culinary culture, found at scores of community pig-pickings and literally hundreds of humble barbecue restaurants.

In the 1970s, however, we Tar Heels lost our way. Some blame a man named Bob Fulp, the head of the state’s environmental affairs department, who began a campaign to get barbecue restaurants to change to gas or electric cookers, supposedly to improve air quality. For whatever reason—perhaps just because cooking with gas or electricity is cheaper and easier than wood-cooking—many restaurants made the switch, and by century’s end a great majority of North Carolina “barbecue” places, including some of the oldest and best‐known, no longer used wood or charcoal at all. This is sad. Even sadder is that many customers either didn’t notice or don’t care. Out of stubbornness or pride a few places clung to the old ways, but a restaurateur in Raleigh exaggerated only a little when he unashamedly told the Food Network that “around here we use hickory for canes.”

By 2013 two of us had had enough. Dan Levine (a.k.a. “Porky LeSwine, impresario of BBQJew.com) and I (a retired professor with time on my hands) founded the Campaign for Real Barbecue. We had three aims in mind: (1) to celebrate and promote barbecue’s wood-cooking heritage; (2) to educate the public about the barbecue tradition and the difference between real wood-cooked barbecue and what we call faux ‘cue*, and (3) to identify and honor places that still cook in the traditional way.

Our principal activity so far has been tracking down restaurants that cook the old-fashioned way, entirely with wood or charcoal, listing them on our website for the benefit of discerning eaters, and giving them certificates and decals that show they have been endorsed by the Campaign. At this writing we have “certified” about 70 North Carolina establishments that qualify. (Unfortunately, since we started this list a half-dozen places have closed or switched to gas or electricity.)

We hope in time to take the Campaign nation- or at least South-wide, because what has happened in North Carolina is only an advanced form of what is happening in some other places. We already have branches in South Carolina and Kentucky, run by volunteers in those states, and we hope soon to add Georgia. (It may be that Texas doesn’t really need us. If not, good for them.)

Coverage of our certification program and other Campaign news can be found on our Facebook page and we also publish an occasional newsletter, True ‘Cue News (for back issues see here—scroll down). For an outfit that’s basically just a handful of volunteers, we have received a good deal of press, notably a story by Calvin Trillin in The New Yorker, called “In Defense of the True ‘Cue.”

Our website, TrueCue.org, offers a compendium of testimonials to the importance of wood-cooking, an essay on the slippery slope between real pit barbecue and crock pot “barbecue,” a list of some forty barbecue historians, documentarians, bloggers, cookbook writers, and other “patrons” who have endorsed our efforts, and much else. We hope you’ll look at it.

Pete Jones, founder of the Skylight Inn, in Ayden, North Carolina, always insisted that “if it’s not cooked with wood, it’s not barbecue.” If you share that conviction, we invite you to sign the True ‘Cue Pledge.

*To be clear, we reserve the “faux ‘cue” label for meat cooked in the complete absence of smoke. We have no beef with those who use gas or electricity for ignition and temperature control.