On A Roll: A Quartet of Roast Beef Sandwiches 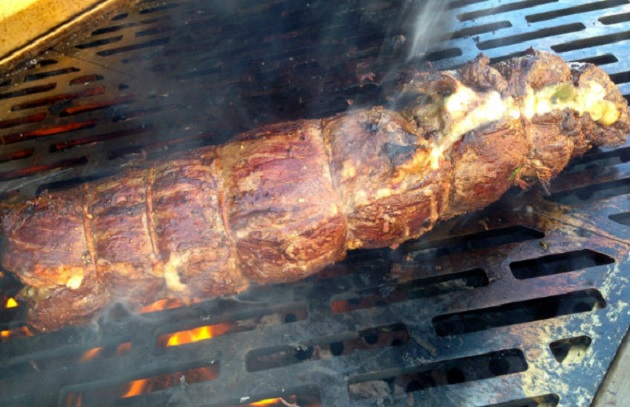 Sometimes, it’s beef you crave. Not chicken, not seafood, not “the other white meat.” You want brawny, sanguine, iron- and nutrient-rich, blood-building beef. Preferably on a crusty roll with enough strength to hold a mouth-stretching payload of grilled or smoked red meat. Yeah.

Debris Sandwich (aka Po’ Boy): Let’s begin the regional tour in one of America’s most food-obsessed towns, New Orleans, where a gravy-soaked debris sandwich can pick up where beignets left off. It’s pronounced DAY-bree, by the way, but is called a po’ boy in some circles. (If New Orleans is on a future itinerary—or if you live there—be sure to visit the Southern Food and Beverage Museum. Steven curated its barbecue exhibits.)

To make it, generously season a 3- to 4-pound beef chuck roast with coarse salt and freshly grated black pepper. Using a sharp paring knife, make slits in the meat every 2 1/2 inches or so. Enlarge the slits with the tip of the knife or the end of a chopstick, then stuff the slits with slices of peeled garlic. Set up your grill for indirect grilling and heat to 300 degrees. Sear the meat on both sides directly over the coals, then transfer to a disposable aluminum foil pan and arrange the pan away from the fire.

Pour 2 cups of low-sodium chicken stock and 2 cups of beef stock around the meat; the liquid should partially come up the sides. Stir in 1 to 2 tablespoons of Worcestershire sauce and Louisiana-style hot sauce, such as Crystal brand. Let the meat grill indirectly for 1 hour, replenishing the coals as needed. Cover tightly with heavy duty aluminum foil, crimping the foil around the edges of the pan. Continue to braise the meat until it’s very tender, 2 to 3 hours more. The internal temperature will be about 200 degrees. Add water or more stock if needed. Remove the meat from the pan and thinly slice or pull into shreds with forks or Bear Claws. Skim any excess fat off the gravy. If the gravy is too thin, bring it to a boil over medium-high heat until it reduces. Return the meat to the gravy and keep warm.

Slice French bread or rolls lengthwise, leaving a hinge on the opposite side. (In New Orleans, they’d use French bread from Leidenheimer’s, a bakery that’s been in the business since 1896, but the bread is hard to get elsewhere in the country.) Spread the cut sides with mayonnaise. If desired, put shredded lettuce on the bottom of the roll. Top with the meat and serve with additional hot sauce and plenty of napkins.

Ultimate Cheesesteak: This is one of my favorite sandwiches ever; it’s a recipe Steven developed several years ago, and I never tire of it. (Neither do my guests!)

It starts with a beautiful piece of center-cut beef tenderloin that is butterflied and stuffed with grilled onions, grilled poblano chiles, and provolone cheese before being tied at intervals with butcher’s string. The meat is grilled—preferably, over a wood fire—until medium-rare. Then it is sliced and served on herbed grilled garlic bread with chipotle-laced mayonnaise. It is sublime. For the recipe, click here.

Baltimore Pit Beef with Tiger Sauce: Baltimore is Steven’s hometown, so I was surprised to learn he never once ate pit beef during the 18 years he was a resident of Charm City. (Who am I to talk? I’ve been a Clevelander for more than 30 years and have never eaten a pierogi.) Now, of course, he’s seen the light.

To make authentic-tasting pit beef at home, season a 3-pound piece of top or bottom round (top round is generally a bit more tender) with salt, pepper, paprika, garlic powder, and dried oregano. Set up your grill for direct grilling and heat to medium-high. Grill the meat, turning frequently, until crusty and dark on the outside, but rare to medium-rare on the inside (125 to 135 degrees). Use an instant-read meat thermometer to check the temperature.

Transfer to a cutting board. While the meat rests, add as much horseradish to a cup of mayonnaise as you can bear. Stir in salt, pepper, and a squirt of fresh lemon juice. Thinly slice a peeled white onion. Thinly slice the meat on a meat slicer or using a sharp knife. Slather the cut sides of kaiser rolls with the Tiger Sauce (horseradish mayo) and pile on the meat and white onions.

Chicago Italian Beef: If you find yourself in Chicago, try not to talk about politics, religion, or who in the Windy City makes the best Italian beef sandwiches. Just don’t do it. The recipe varies from restaurant to restaurant, but this one will get you in the ballpark.

Start with a well-marbled rump roast—fat is an important component of these “sangwiches.” Stuff with thinly sliced cloves of garlic as described above, then brush on all sides with olive oil. Season generously with salt, pepper, dried oregano, and hot red pepper flakes. Set up the grill for indirect grilling and heat to 375 degrees. Place the seasoned roast, fat side up, in a large disposable aluminum foil pan along with 1 quart of water and 3 cups of rich beef stock. (The liquid should come part way up the meat.) Though not authentic, I like to throw a diced onion in the pan, too.

Roast the meat for 1 to 1 1/2 hours, or until the internal temperature is about 145 degrees. Trim 4 bell peppers (red and green) and cut into quarters. Toss with olive oil and salt and pepper, and roast on the grill until slightly softened, about 30 minutes. Let the meat, meat juices, and peppers come to room temperature, then cover and refrigerate separately for at least 8 hours or overnight.

Strain the meat juices into a saucepan or deep frying pan. (Discard the solids.) Simmer for 20 to 30 minutes, or until flavorful. Slice the meat very thinly on a meat slicer or using a sharp knife. Add the sliced meat and the peppers to the gravy. Slice French rolls or hoagie rolls in half lengthwise, leaving a hinge on one side. Load the sandwich with the warmed beef, some of the gravy, and a couple of pieces of pepper. If desired, hold the sandwich with tongs and quickly dip it in the gravy. (Yes, it’s messy. It’s supposed to be.) Top the meat and peppers with giardiniera, jarred pickled vegetables that are available in most supermarkets or online. (One good brand is Vienna.) Again, serve with plenty of napkins!