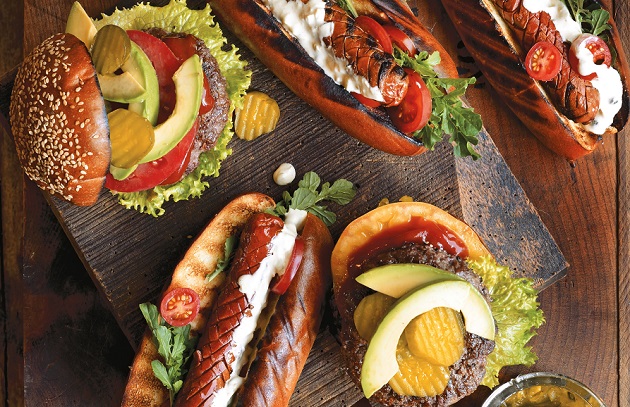 There were no picnics when I was a child. Just what we called wienie roasts—impromptu affairs that required only a quick stop at the market to buy an 8-pack of hot dogs and buns and miscellaneous accoutrements. Once at our favorite riverside park—usually deserted as our outings were almost always on weekdays—we’d gather dry wood so Dad could build a fire in one of several WPA-built stone fireplaces, hard evidence of Roosevelt’s “New Deal.” The hot dogs were impaled on green sticks whittled to a point with a pocket knife.

So, for me, hot dogs are a sentimental favorite. (Steven has his own hot dog story; see it here.) I not only love North America’s regional variations—such as Chicago dogs “dragged through the garden” and bacon-wrapped Sonoran dogs from New Mexico—but Iceland’s remoulade- and fried onion-topped hot dog made of lamb, and Chile’s indulgent completo with a glorious but messy payload of mashed avocado and mayonnaise. Sweden’s interpretation, featuring mashed potatoes and shrimp salad in a flatbread cone—is still on my bucket list. Some hot dog aficionados are very partisan when it comes to their favorite dogs. In a massive hot dog tasting colleagues and I undertook a few years ago (89 samples), I discovered I am not. I love Schaller and Weber’s New York-style pork and beef hot dog with its tight, garlicky bologna-like filling and the percussive “snap” it makes when you bite into its natural casing. Wagyu dogs have cache. But I am also unapologetically happy with a package of relatively inexpensive dogs from the corner grocery, like Bar-S or Sugardale.  (Steven prefers the salty, familiar tang of Hebrew National.)

Whatever your favorite hot dog—and Americans will eat nearly 150 million of them while celebrating the July 4th holiday according to the National Hot Dog and Sausage Council—you’ll want to try a technique Steven debuted in his latest book, Project Fire (Workman Publishing, 2018).

These cool-as-all-get-out hotdogs use a clever trick called “hedgehogging” in which you score the surface of the hotdogs in a crosshatch pattern. The edges puff and char during grilling, giving you an exceptionally crusty exterior and attracting even more wood smoke flavor. (Tip ’o the hat to Russ Faulk of Kalamazoo Outdoor Gourmet for this singular scoring technique and the idea of grilling the hotdog buns with mayonnaise and remoulade sauce. He calls his version a “Po Dog.” Amen.)

Find the recipe here. From all of us, have a wonderful (and safe) Fourth of July!