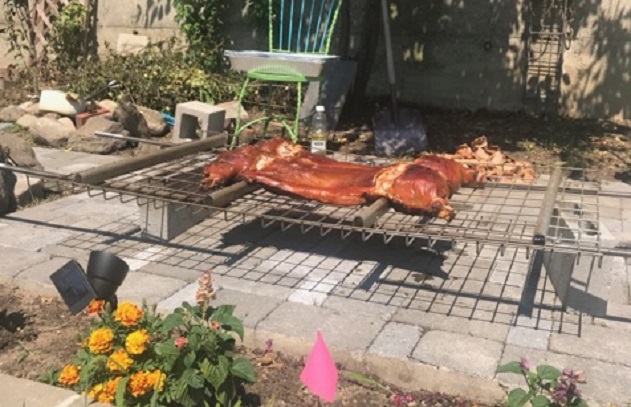 The following blog was written by Mike Fox, a New Yorker and longtime fan of Steven’s. We were intrigued by the photos he sent and invited him to contribute a story chronicling his first experience barbecuing a whole pig.

Back when the cold winds were blowing in February or March, it seemed like a fun idea to try to barbecue a whole pig. Many “learning experiences” (translation: mistakes) later, it turns out we were right. On June 30th we had a great backyard barbecue with 25 or so friends in Queens, N.Y. For anyone wanting to try it out, here’s the story.

After lots of research, and many reviews of Steven’s How To Grill, we went to the hardware store and bought about 30 cinder blocks. We used these to build a rectangular pit. We didn’t use any mortar or even mud to seal it which you could do, but it held up well enough. The way we assembled it makes it easily dismantled for storage during winter, relocation, or to placate a spouse who doubts the wisdom of potentially turning the backyard into a wildfire disaster. For a grate, we were lucky enough to have a third partner in crime (weirdly also named Mike—we call him Big Mike, not because he’s big, but because he’s the most senior) who came through with two large pieces of steel shelving to which he attached metal rods for handles. When it was time to cook, we made a sandwich with these and the pig in the middle and tied it shut with wire. Flipping was pretty easy (just watch those unsecured cinder blocks when replacing the pig on top of the pit). I was worried about being able to maintain the proper temp for a long cook since the pit was full of gaps and not covered, so before cooking, we made a really large fire of old pieces of wood and let that burn for about an hour. The cinder blocks absorbed the heat before cooking began and actually ended up radiating back heat during the cook. Once we had coals, we placed a 20 pound bag of charcoal briquettes (still in the bag) right on top, tore it open, and watched it ignite (fun for the inner pyromaniac). While the coals were warming up, we prepped the pig with vegetable oil, salt and pepper. We placed temperature probes in one ham and one shoulder and hung an oven thermometer upside down from the grate right next to the mid-section of the pig. After another 45 minutes or so, we spread out the coals, and set the pig down on top of the pit (skin side up). That’s when the “learning experiences” began and nearly ended the party before it started.

Once the pig was settled, we covered the pit in large cardboard sheets that I mistakenly thought were safe since the top was several feet over the bed of coals. There’s a reason most DIY pits use steel sheets but . . . I might have been right if we hadn’t shoveled quite so many hickory chunks into the pit at that point or doused the cardboard in water first. Anyway, somewhat predictably, pig grease heated up, poured out and flare-ups followed. Just as I peeked to check the temp—already too high at about 350 or 400, the entire 3′ x 5′ covering ignited. I threw it off and kicked it away. Luckily, a long garden hose was nearby and a few of the other cooking team jumped in like a volunteer branch of the NYFD. We let the coals cool off and from then on, the pig cooked over well-soaked cardboard sheets. After the first hour, we figured out how to maintain the temp properly and regularly re-soaked the cardboard so there were no more flare-ups.

For step-by-step instructions, see Steven’s How to Grill (p. 154-158). For us, about four to four and a half hours after placing the pig on the smoker, we took it off and the party began (the party had really started around 9:00 with the first match being thrown and then at 10:30 with the first beer can being popped, but that was on a need to know basis and the other guests didn’t need to know).