The American Barbecue Specialties You Need to Know About 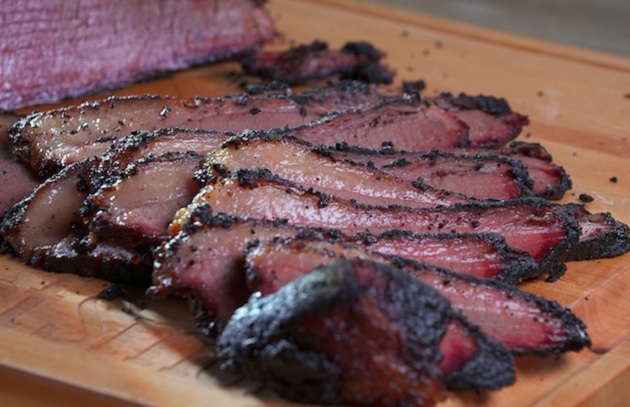 America is blessed with an incredibly rich barbecue culture. Many countries grill. Some smoke. But only one—the United States—has a deep, rich, and highly evolved tradition of both barbecuing (smoking) and grilling.

Long before the United States was a country (before there were even states to be united!), its inhabitants loved barbecue. Indians of the Pacific Northwest butterflied whole salmon through the belly, pinned them to cedar stakes, and roasted the fish in front of bonfires.

Early settlers found a land teaming with game, with rivers and bays brimming with seafood, and vast forests of hickory and oak to provide fuel for smoking and grilling. Spanish vaqueiros (cowboys) grilled steaks over mesquite and spit-roasted goats over campfires. And, in what would become the American South and pit barbecue, whole hogs were roasted over ember-filled trenches. True barbecue—meats cooked low and slow over a smoky fire—is the USA’s greatest gift to the world of live fire cooking.

Today, there are multiple pockets of grilling genius to be found throughout the country, unique dishes that you, as a well-rounded and knowledgeable pit master, must add to your repertoire.

Kansas City: In the beginning, burnt ends were just that—the dark crispy trimmings that were too charred or tough to sell with the moist smoky sliced brisket meat people actually paid money for. Restaurants like Arthur Bryant’s in Kansas City gave them for free to customers who had patiently waited in line the hour or two it took to place their orders. But the appeal of burnt ends has exploded, causing barbecue enthusiasts to recreate these toothsome morsels using everything from chuck roast to pork belly.

Baltimore: I spent the first 18 years of my life in Baltimore. Not once did I eat pit beef, which is beef—usually top round—that is grilled so it’s crusty on the outside, rare and juicy on the inside, and heaped high on a kaiser roll or rye bread. I’ve been making up for this lapse ever since. To make it, coat a 3-pound chunk of top round with your favorite rub and let it cure for at least 4 hours in the refrigerator. Heat your grill (charcoal or gas) to medium. Grill the meat, turning often with tongs, until the outside is crusty and golden brown and the meat is cooked to taste: on Baltimore’s Pulaski Highway, the best joints for pit beef aim for 125 to 130 degrees. Slice thinly, and serve on kaiser rolls or rye bread with horseradish, lettuce, and slices of tomato and onion. (For a step-by-step recipe, see page 169 of BBQ USA.)

Hawaii: No survey of regional American barbecue would be complete with Hawaii’s kalua pig, If you’ve ever been to a luau, you’ve probably sampled this porcine masterpiece, which is traditionally cooked underground in pits lined with banana leaves. To imitate it at home, season a bone-in pork shoulder (5 to 7 pounds) with coarse salt and freshly ground black pepper. Wrap the meat in banana leaves (available online if you don’t have a local source). Indirect grill until the pork is fall-apart-tender, 6 to 8 hours. Tear into chunks or shreds, then serve, if desired, on Hawaiian-style buns. 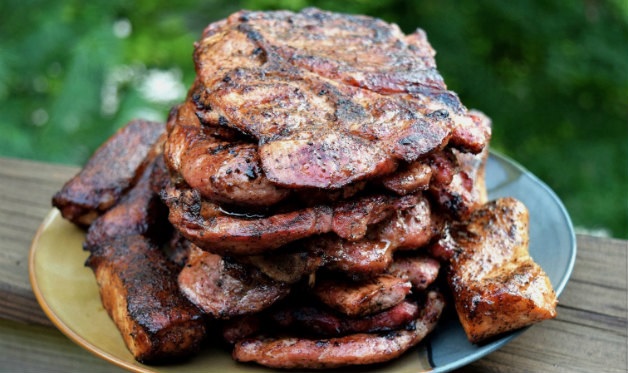 St. Louis: Mention St. Louis barbecue to most Americans and what comes to mind is ribs. Indeed, there’s even a St. Louis rib cut—spareribs trimmed to a neat rectangle. But visit a typical St. Louis backyard and you’ll likely find something very different sizzling away on the grill: pork shoulder steaks slathered with Maull’s, a local tomato-based barbecue sauce. Cut from the shoulder, these steaks are generously marbled with fat and stay juicy even when subjected to the high, dry heat of the grill. Find the recipe here.

Kentucky: The meat of choice here for barbecue is not pork, not beef, not chicken, not even lamb…it’s mutton. Smoked ewe has been popular in Owensboro, Kentucky, since July 4, 1834, according to records, the likely brainchild of the Dutch sheep farmers who settled on the southern banks of the Ohio River earlier in the century. It’s swabbed during the cook with what’s known as “black dip”—a mop sauce made of Worcestershire sauce, cider vinegar, and spices. If you’re game, season a 5-pound mutton shoulder or leg (or substitute leg of lamb, which is easier to find and milder tasting) with coarse salt and freshly ground pepper, then indirect grill with soaked hickory chips until very tender, 4 to 6 hours. Baste every 30 minutes or so with this sauce. Slice or chop and serve on toasted hamburger buns with additional “black dip.”

Wisconsin: Brats (short for bratwurst) were introduced to the upper Midwest by German and Austrian immigrants in the late 1800s. Now, these sausages are enjoyed from one end of the Badger State to the other. Usually served on a crusty hard roll, brats are perfect for tailgating. I like to grill brats indirectly (do not prick the skins first), then transfer them to a hot holding bath of beer and onions. Find my recipe for brats in a “hot tub” here.

The Carolinas: Pulled pork here has no equal. As William Burd observed in 1728: “The only business here is raising of hogs, which is managed with the least trouble, and affords the diet [Carolinians] are most fond of. Whether pulled into moist, meaty shreds, chopped, or sliced,  it is usually served with a sauce that can change depending on your exact geographical location in these states. I’m not a partisan: I love the mustard-based sauce and the tart vinegar-based sauce the Carolinas are known for. Here’s an example of the former.

Alabama: Big Bob Gibson Bar-B-Que in Decatur put Alabama ’cue on the map with their singular dish, barbecued chicken with white sauce. Half chickens (generously seasoned with salt and pepper) are slowly smoked to tenderness in a hickory-fired pit, then dipped in a peppery amalgam of vinegar and mayonnaise laced with horseradish. White Barbecue Sauce will rock your world.

Ithaca, New York: While we’re on the subject of chicken, I’d be neglectful if I didn’t mention Cornell Chicken, the invention of Bob Baker, who was professor of poultry science at Cornell University and one of the champions of barbecued chicken. He pioneered a basting sauce comprised of vegetable oil, cider vinegar, salt, pepper, poultry seasoning, and an egg. For a recipe, see page 384 of BBQ USA.

California: The “Golden State” has contributed at least two specialties to the barbecue pantheon. The increasingly popular tri-tip from Santa Maria (north of Santa Barbara) was a cut butchers used to grind for hamburger. Now it’s a cut with cache. And from Marin County—Tomales Bay, to be precise—come barbecued oysters. Roast oysters on the grill or over a fire, and you won’t need an oyster knife. 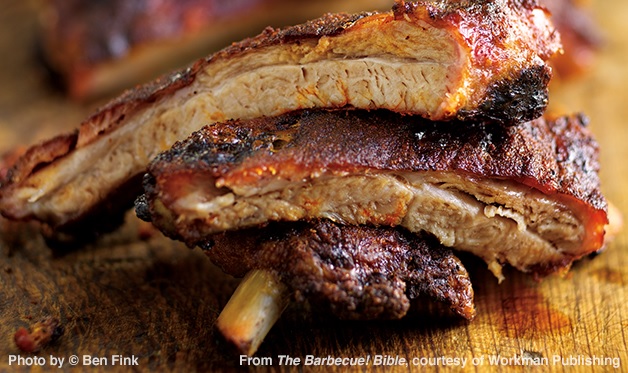 Texas: With my next book, The Brisket Chronicles, in final edits, you can imagine brisket has been occupying my waking thoughts. And you can’t think of brisket without thinking of Texas, where pit masters have been known to genuflect before putting this magnificent slab of meat in their smokers. One of the newly ordained brisket gods is Aaron Franklin, the founder of Franklin Barbecue in Austin. I’ve distilled some of his wisdom in my new book. Until it’s released in Spring, 2019, content yourself with this sensational recipe, appropriately called “BBQ Titans’ Brisket.”

Memphis: Most people eat their ribs “wet”—that is, dripping with sweet, sticky barbecue sauce. But if you really want to savor pork bones, journey to Memphis to sample the dry rub ribs at the restaurant Rendezvous. For more than 50 years, the Vergos family has been dishing up baby back ribs that are crustily grilled over charcoal, mopped with vinegar sauce, and thickly coated with a dry rub just before serving. Can’t make it to Tennessee in the near future? I’ve got you covered with this recipe.