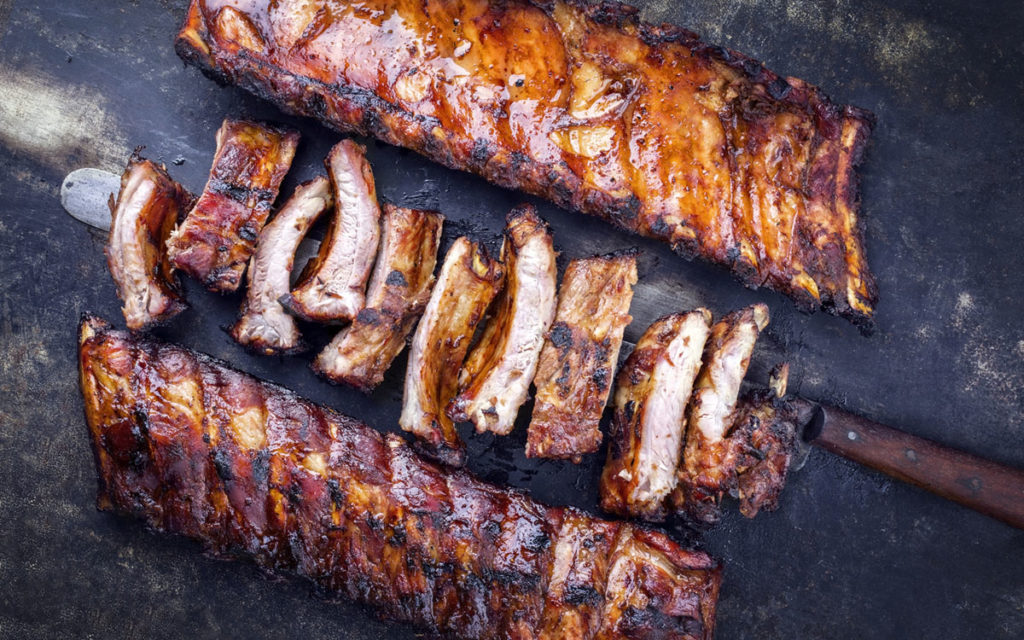 When Illinois-based barbecue enthusiast and KCBS-certified barbecue judge Peter Cravath mentioned that he’d be visiting one of the Midwest’s smoked meat meccas, we invited him to write a blog on his experience. Smokey D’s, with three locations in Des Moines, Iowa, is one of the country’s winningest teams on the competition barbecue circuit, racking up over 800 national, regional, and local wins. Not to mention some pretty sizable checks. But does all that goodness translate to brick and mortar restaurants? Here’s Peter’s take.

I recently found myself on an unexpected trip to Iowa, and with the prodigious achievements in recent years on the BBQ circuit, I had to take a trip to Smokey D’s BBQ in Des Moines to see what all the hubbub was about.

It’s a rather large place, seating maybe 100, with partitions throughout dining room to keep the noise level down and afford a conversationally friendly atmosphere. I stood in the fast-moving line, gazing at the menu behind the order takers/cashiers. My mind was set on sampling their award-winning meats, as that’s what we get in the judge’s tents, and I only had so much room to consume greatness. There’ll be room for sides on the next trip.

I spoke with the cashier about the best way to order meats, and she happily configured a large plate consisting of a ½ rack of ribs, 1/3 pound of brisket, and some sausage. She handed me a customer locator, and I meandered off to find a seat.

Ordered up a locally brewed Oatmeal Stout, and in about 5 minutes, the food arrived. Like any good bbq place, the meats came unsauced, with an abundance of sauces in squirt bottles stuffed into 6 pack containers within an arm’s reach. 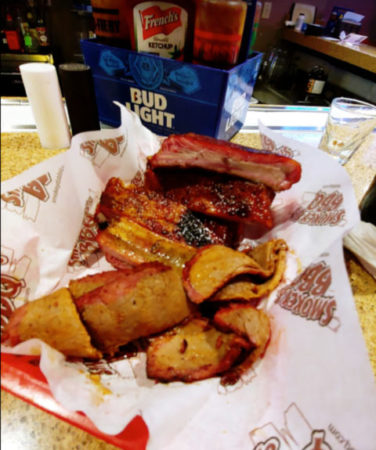 The ribs were brought to my seat sliced, making it easy to devour without having to carve up a ½ slab. I grabbed the Kansas City-style sauce, squirted a nice pool onto the corner of the serving basket, picked up a rib, and dredged away. It was an amazing piece of pork, a tasty representation in the heart of pork country. It was savory, very fresh, very tender, and juicy. Seasoned perfectly. It tugged nicely from the bone, but still had some retention, the sign of a perfectly cooked rib. I observed that the rib end was a bit thick; almost knobby. I’m used to spares with mostly flat bones, or baby backs with some symmetry, but hey, I’m on the road, and I should expect the unexpected. The meat, however was delightful. On to the Fiery sauce of which there were two (X-Fiery also) of varying heat intensities. The less fiery was my favorite as it allowed the meats’ flavors to come through. It was spicy, but was well-calibrated with a round full-bodied flavor including tomato, molasses, and a handful of spices.

The brisket appeared to be sliced from the entire flat on a rotary slicer. The pieces were perfectly uniform in thickness; slightly thinner than the width of a pencil. Not a morsel of fat from any fat cap was visible. The meat had a abundance of smoke presence, with good texture, and sincere beef flavor. Now I can see why their awards are stacked up all over the walls. I would have asked someone knowledgeable about the woods used, cuts of meat, breeds of pork and cooking methods, temperatures etc., but there was no one authoritative making the rounds during my visit. Lots of food runners though. 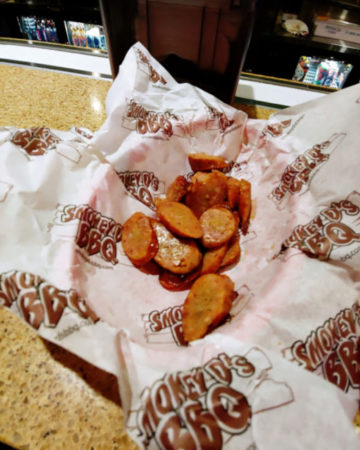 With the exception of arriving sliced, the sausage was right out of the Texas Hill country. Once again, beautiful pork, heavy presence of black pepper, along with spot-on smoke, a snappy bite from the thin casing, nice chew; the juices came to life. Once again, delicious.

In conclusion: Iowa Smokey D’s lays true to its hype with faultlessly smoked quality pork, and to have that translate from the barbecue competition battleground to a multi-location restaurant setting is quite an achievement in anybody’s tent.

Iowa is one state that has placed Breaded Pork Tenderloin Sandwiches on the gastronomic map, and Smokey D’s has upped the game with their version. These sandwiches are usually huge, juicy, crispy with tender pounded, seasoned, and breaded pork. The bun, dwarfed by the meat, is simply there for show. Add some coated and fried jalapenos and you’ve got a winner. This one will be on my list for the next visit.