Born to Grill – A Greek Tradition 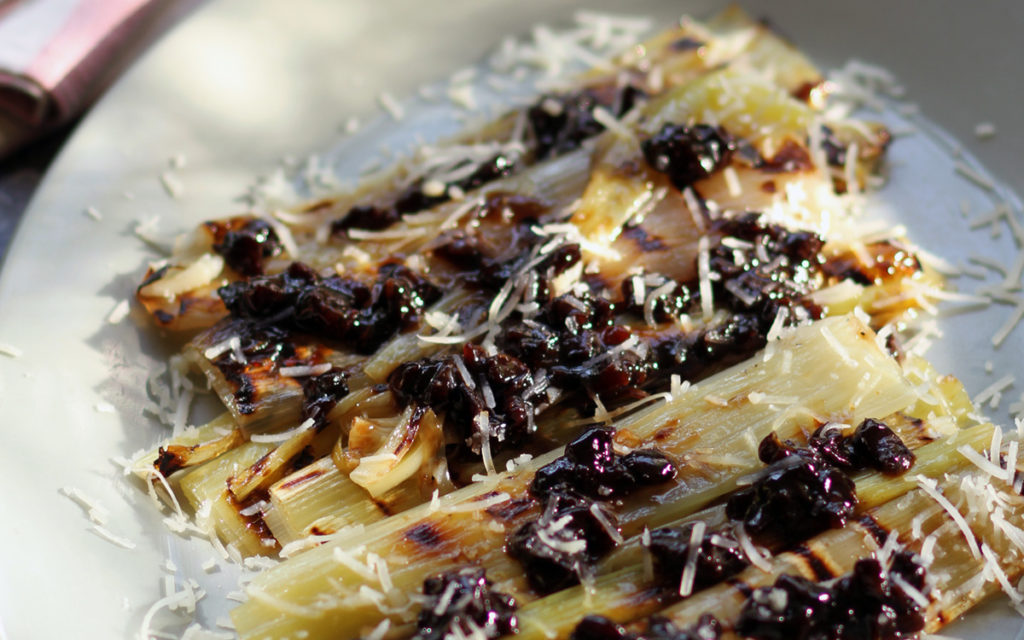 From time to time, we feature guest blogs from friends and family of Barbecuebible.com. So it gives me great pleasure to introduce you to Greek cooking and grilling expert, Diane Kochilas. If you’ve read Barbecue Bible or Planet Barbecue, know my enthusiasm for Greek grilling. Diane and I have another connection—the producer of her PBS TV show, My Greek Table is none other than Matt Cohen, producer of Project Fire!

This week, Diane writes about one of the world’s oldest grilling traditions—Greek. I certainly learned something, and I hope you will too. As for the recipe, Grilled Leeks with Prunes—leeks are loaded with flavor this time of year. I hope you enjoy it as much as I do. For more information on Diane, visit her website. —Steven Raichlen

In Greece, they say you can learn to cook but you’re born to grill, so esteemed are the simple foods cooked to perfection over charcoal and wood. Grilling has a special, almost primordial, place in Greek food lore, from mythic and ancient pagan celebrations to the holiday known as Tsiknopempti, or Smoky Thursday, when tradition dictates that one feasts on an array of smoky, grilled meats, the last such time to do so before the start of Lent and the abstention of all animal products.

Greek grilling techniques are deceptively simple. It takes zen focus to grill a whole fish to that point where the skin is charred but the flesh succulent, or to get squid or octopus off the grill at the perfect moment, before they turn rubbery (octopus needs to be boiled first). To cut and season meats such as lamb or pork, for grilled kebabs of varying size, or as chops, or in chunks to fit onto a rotisseried skewer takes well-honed instinct and discipline, knowing how large pieces need to be so that they stay juicy, especially since Greeks like their meats well-done, and knowing just how much of the simple trinity of coarse salt, oregano and pepper are needed to bring out that uniquely Greek umami flavor.

Grilling in the Greek tradition is less a home-cook’s bailiwick and more the dominion of pros, typically men. Barbecuing at home usually means working with rather primitive grills, sometimes nothing more than a huge, old, discarded water heater, shaped like a giant cylinder and cut in half lengthwise then outfitted with a rack. The coals go into the belly and the rack sits about eight inches from the heat source, unadjustable. You’ve got to have a great sense of awareness to cook well on such a contraption. Other home grills are the ones often found in the gardens of Greek country homes, built into a stone wall, sans covering. Fish, souvlaki (aka kebabs), biftekia (Greek burgers), breads, and seasonal garden veggies are often what people like to cook on summer nights. 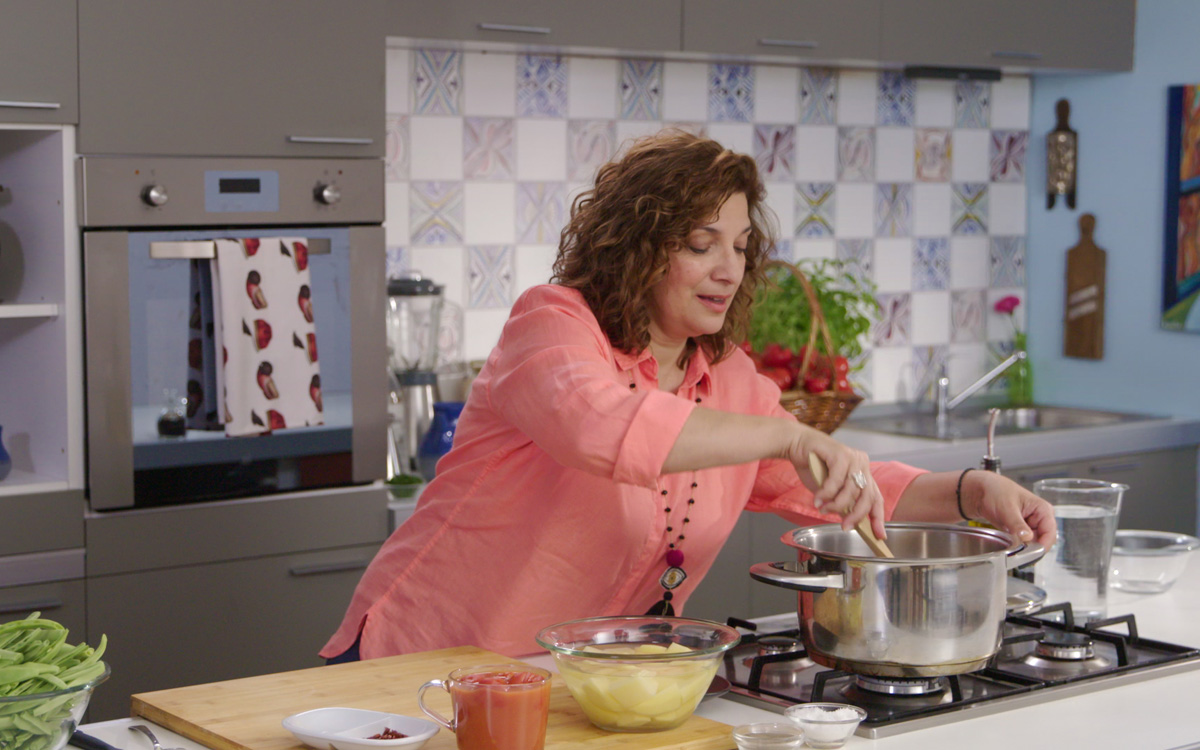 There is, of course, the entire chapter of spit-roasting whole animals and offal sausages (called kokkoretsi), which is something we Greeks do at Easter and for an occasional special-occasion family feast. The tradition is more prevalent on the mainland than on the islands, and nowadays what was once the tortuous task of turning the rotisserie by hand for hours as the animal slowly roasts, has been alleviated by the advent of motorized handles.

In the grill world that is Greek, one could arguably include Greece’s most iconic street food, gyro, the upright rotisserie of thinly layered meats, that are piled into pita rounds, slathered with tzatziki, and garnished with onions, tomatoes and fries before being wrapped. The art here is not as much in the grilling as it is in the layering and seasoning of thin slabs of meat, typically pork or chicken, which nowadays are commercially prepared but once relied on the mastery of gyro specialists who understood how to layer and press and season and get the fat in all the right places to make for tender, meltingly good slices that peeled off the turning cone.

In at least one place, Crete, there is a completely different outdoor grilling tradition. It is called antikristo (an-dee-kree-STOH) and requires a fencelike circular grill onto which large, flat pieces of meat are attached, around charcoal and flames in the center. The grill doesn’t rotate; instead, the grillmeister carefully monitors the progress of each piece, turning it as needed and basting it with that magic quartet of olive oil, salt, oregano and lemon juice.

Another regional delight is the spit-roasted whole suckling pig, gourounopoula, that is a specialty of the Peloponnese. Indeed, on Sundays in many places around the region, you find it on roadside stands and sold to daytrippers by the chunk, wrapped in parchment to go, as they make their way home back to Athens. Here, too, the seasoning is a basic salt-pepper-oregano trio. Greeks like to keep it simple no matter what they’re grilling, the better for the delicious flavors of meat and seafood to shine forth unadulterated. 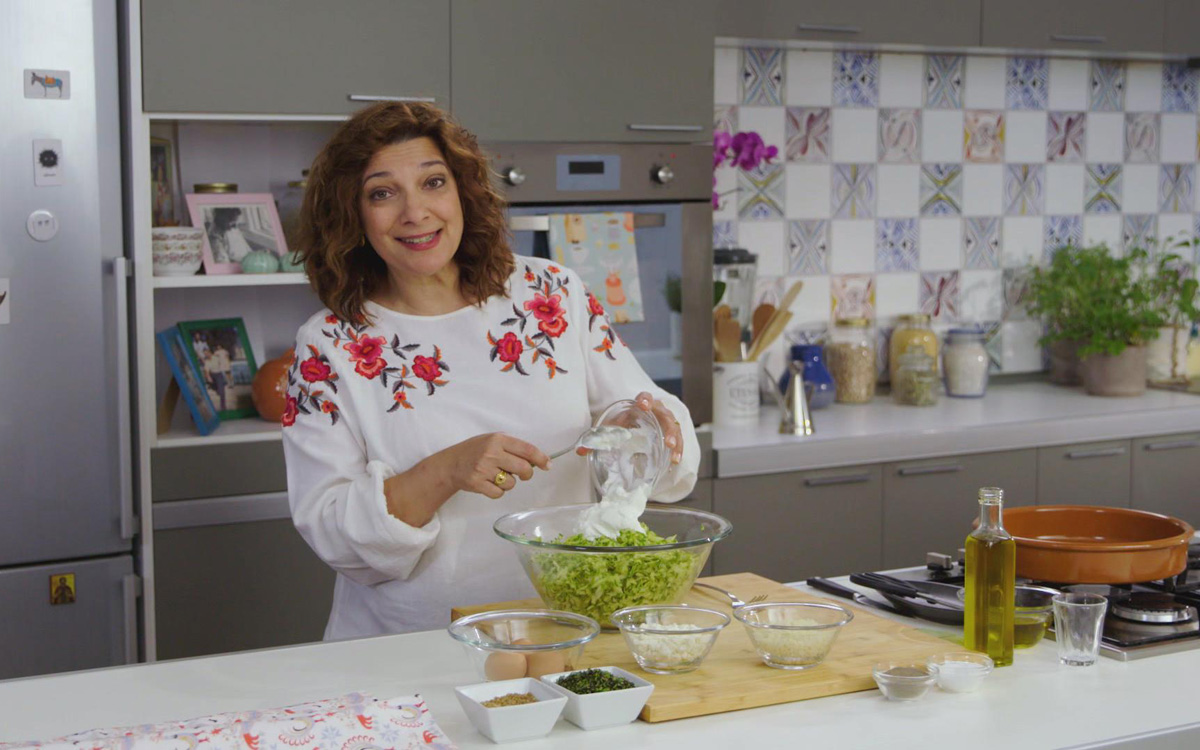 Grilling is arguably the oldest culinary art form in Greece, the vehicle of heroes’ feasts and ancient rituals. There are still tools used today that have remained the same over the centuries: the satz, for example, a sheet of metal, basically a freeform griddle, was the tool of choice for ancient, often itinerant, cooks all throughout the Mediterranean and the Fertile Crescent. It’s not much different from the hotplate used on indoor grills in today’s ultramodern kitchens. Greek island cooks still use something called a fou-fou, which is basically a miniature clay or ceramic grill, with a docked tray on top where the food sits, and a space just beneath where a small fire burns that cooks the food on hand. Until a generation or two ago, it was the utensil most home cooks used to grill fish. My favorite Greek grilling accoutrement is a slightly more modern, long-handled, cage-like contraption meant especially for whole fish, to keep it intact over the grill and to facilitate turning it without causing it to fall apart.

Sexy grills and barbecues are relatively new to Greece. For most people, whether at home or in professional restaurant setting – indeed, there are restaurants called Psistaries, which serve nothing but grilled meats and a few side dishes – the art of grilling is a matter of turning out delicious, succulent, if well-done, cuts of meat with very few seasonings on fairly primitive equipment. Maybe that proves the wisdom of the adage that you can learn to cook but that you’re born to grill. You either have the touch or you don’t!

My great love when it comes to grilling Greek-style is a self-imposed one, less tradition and more a reflection of the way I like to eat. I love the promise that Greece’s vast array of vegetables provides. From zucchini in summer to winter squashes in colder weather, to leeks, onions and scallions, to eggplant for various uses, including stuffed, and tomatoes, peppers, mushrooms, and even cabbage, Greece’s formidable vegetable traditions are for me the stuff of a cook’s dream. I marinate vegetables in olive oil, lemon juice, sea salt and dried herbs or spicy ground peppers; love to use ouzo and mastiha liqueur as an ingredient for marinades; find pleasure in soaking vegetables in sweet wine such as mavrodafni or dry, tannic reds like a good northern Greek xynomavro; and esteem the chewy texture of grilled leeks with sweet-savory sauces of raisins, prunes and petimezi (grape molasses), Greek honey or balsamic. For me, it’s the vegetable world that holds the most promise on the grill, for here one can combine primordial instinct with health-conscious options that fit beautifully within the tenets of the Mediterranean Diet. 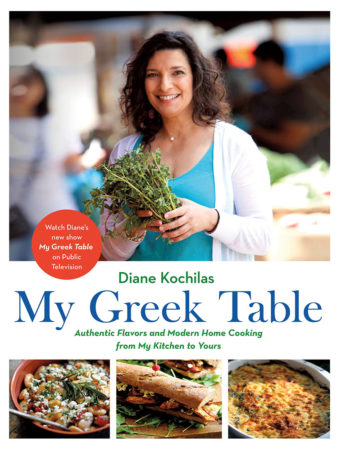 Inspired by her travels and family gatherings, the recipes and stories Diane Kochilas shares in My Greek Table celebrate the variety of food and the culture of Greece. Her Mediterranean meals cover a diverse range of appetizers, main courses, and desserts to create raucously happy feasts, just like the ones Diane enjoys with her family when they sit down at her table.