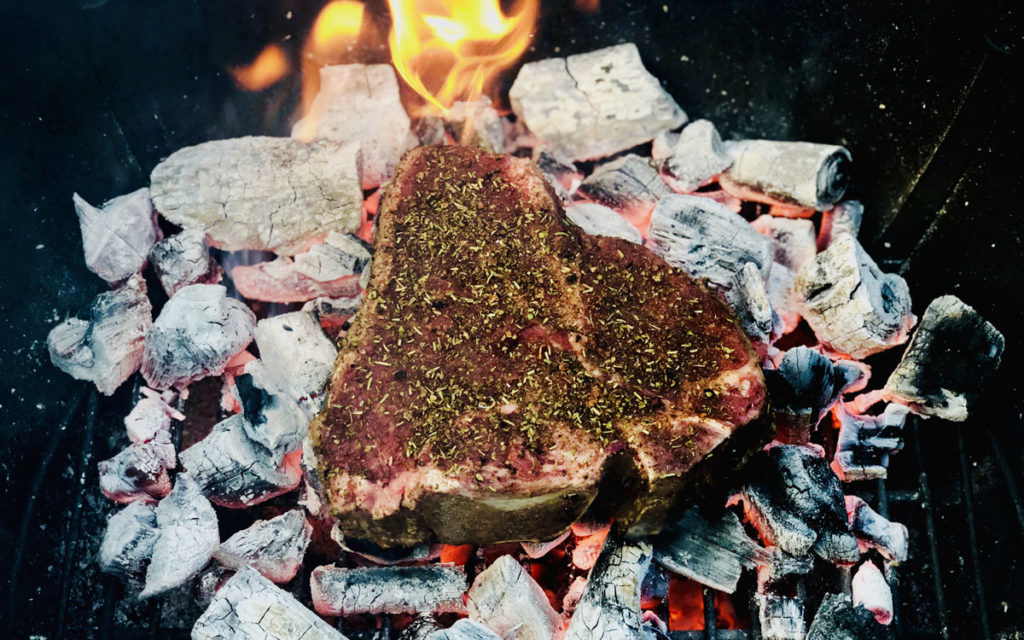 If you Google the word steak you will find steak restaurants, steak recipes, opinions on the best type of steak, the best way to cook a steak, the best seasoning for steak, information on resting a steak, how to dry brine a steak, how to finish a steak, and online companies that can ship steaks right to your front door. It can be overwhelming. So, with all this information on steak how do you determine your favorite? Test it.

Pick a type of steak and experiment with only one variable at a time. I suggest you start with your favorite steak and your favorite grill. I realize many of you have multiple grills, so pick one to start. Select a seasoning, cook to the doneness you like, rest it for ten minutes, and take some notes. Next time, change one variable. Change the cut of steak, the type of grill, the seasoning you use, or finish the steak with a compound butter or a drizzle of extra virgin olive oil.

Here I will explain the succulent results of my recent steak experiment.

I opted to cook the same steak three different ways one night. Do not worry, I had help eating all the steaks! It made sense to compare the results at the same time. I selected one of the most popular cuts of steak, a full porterhouse.

Like a T-bone, a porterhouse steak is two steaks in one. On one side of the T-shaped bone is a New York strip and on the other side is a filet. The porterhouse is cut from the rear end of the short loin and includes more tenderloin (filet).

Three porterhouse steaks of equal size cut 2 inches thick were special ordered the day before from my local grocery store. Each steak weighted 2.4 pounds. The steaks were huge!

Direct grilled, reverse seared, and caveman-style (roasting directly in the embers) were the cooking methods I tested. Direct grilled is the standard. Reverse seared seemed appropriate due to the thickness of the steak. Caveman-style, as Steven calls it, always looked cool to me, but I’d been reluctant to try it.

Here is what I kept consistent. Each steak was seasoned with Project Smoke’s Malabar Steak seasoning, seared on a kettle grill with the same charcoal, cooked to 135 degrees, and rested ten minutes before slicing. I used the Maverick XR thermometer to monitor the temperature as the steaks cooked so the final temperature would be consistent.

The kettle grill was initially set up for smoking, culminating in the reverse sear. Ten pieces of lump charcoal and soaked wood chips were used to create smoke. The grill ran between 220 to 230 degrees for an hour. The lid vent was placed over the meat to pull the smoke across the top of the steak. The digital thermometer alerted me when the steak reached 110 degrees. While the steak rested for 10 minutes, I added hot coals to the grill to complete the cooking.

The smoked steak was placed back on the grill for the “sear.” The direct grilled steak was cooked on the same grill.

A second kettle grill was set up for the caveman method. Once all the coals were gray, the steak was placed in the grill directly on the hot coals.

Here’s a summary of the results and what I learned about the three different methods.

The caveman method of cooking in the embers was a cool way to cook a steak. My bias was that the steak would burn right on the coals and taste burnt. Wrong! The sizzling sounds the steak made when it hit the hot coals was wild. I moved the steak around to encourage even cooking and avoid any hot spots in the coals. I anticipated 12 minutes per side. Once both sides were seared, I checked the temperature; the thick steak, as it turned out, needed more time.

The outside was looking charred and I was worried it would just taste burnt, so I turned the steak upright and used the bone to help protect the steak while it finished cooking. 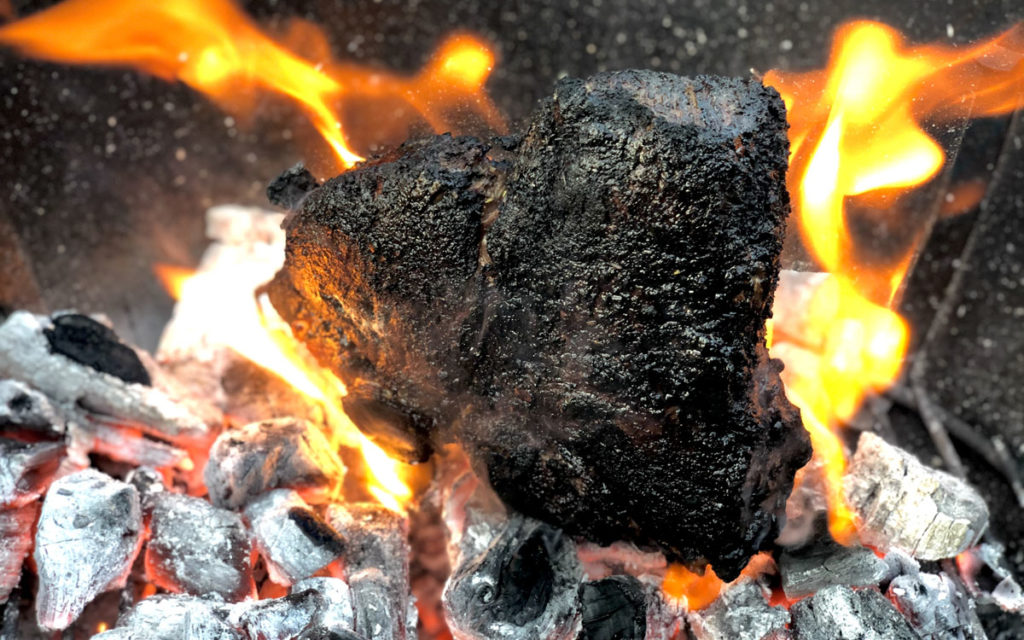 The total cooking time was closer to 14 minutes per side. The caveman steak cooked evenly, to my surprise. No doubt there was some char on the outside, but it was not overwhelming. The contrast of the crisp outside and the soft inside was better than I anticipated.

The direct grilled steak did not disappoint, either. It took 10 minutes per side to reach an internal temperature of 135 degrees. The sear on the steak was delectable and the New York strip and the filet were tender on the inside. The Malabar Steak seasoning added flavor and texture to the steak that was lost in the caveman method. To reduce the cooking time, I would select 1.5-inch-thick steaks for direct grilling in the future. 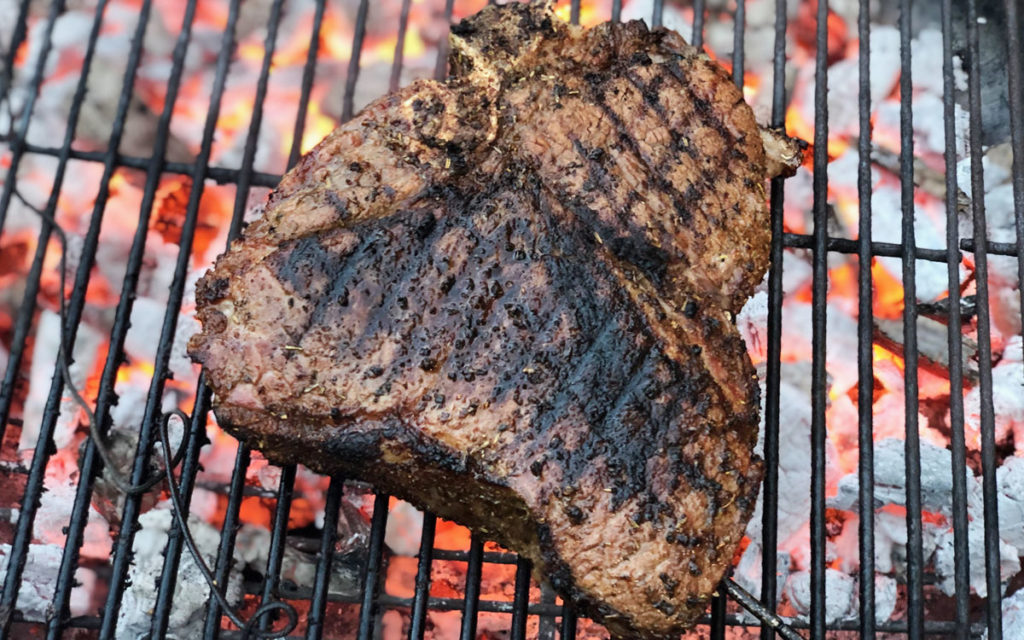 The smoke on the reverse-sear was awesome. This method produces an evenly cooked steak, a smoky aroma and flavor, and minimizes the chances of overcooking since it only takes a few minutes per side to “sear” the steak. The kitchen smelled of smoky steak while it rested. The steak took on a purple color after the smoking.

In my opinion, the smoke takes this steak over the top. There is a crispy and flavorful texture to the outside of the steak created by the smoke and the rub that you don’t get with standard direct grilling. The reverse-sear steak was tender and juicy on the inside. The combination of the smoky crust and the buttery soft inside was the winner for me. If you look closely, you can even see a smoke ring on the steak. 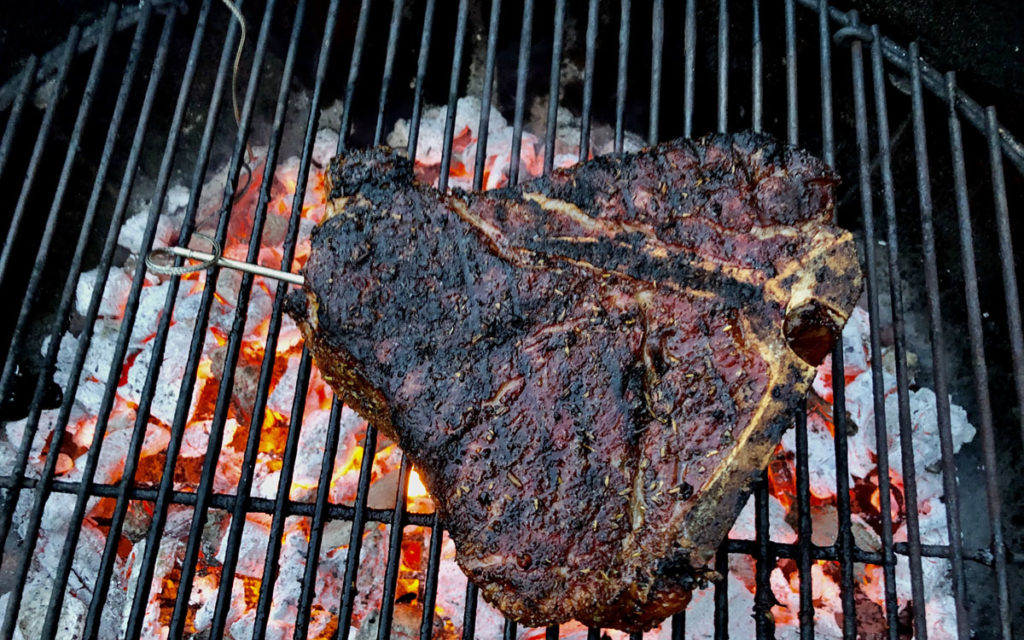 I hope this inspires you to run tasty and fun experiments on your grill. Once all the tasting was complete the reverse-seared steak was served with smoke roasted potatoes and grilled broccolini.