An Alternative to Crown Roast of Pork: Sir Porkalot’s Crown Rack of Ribs 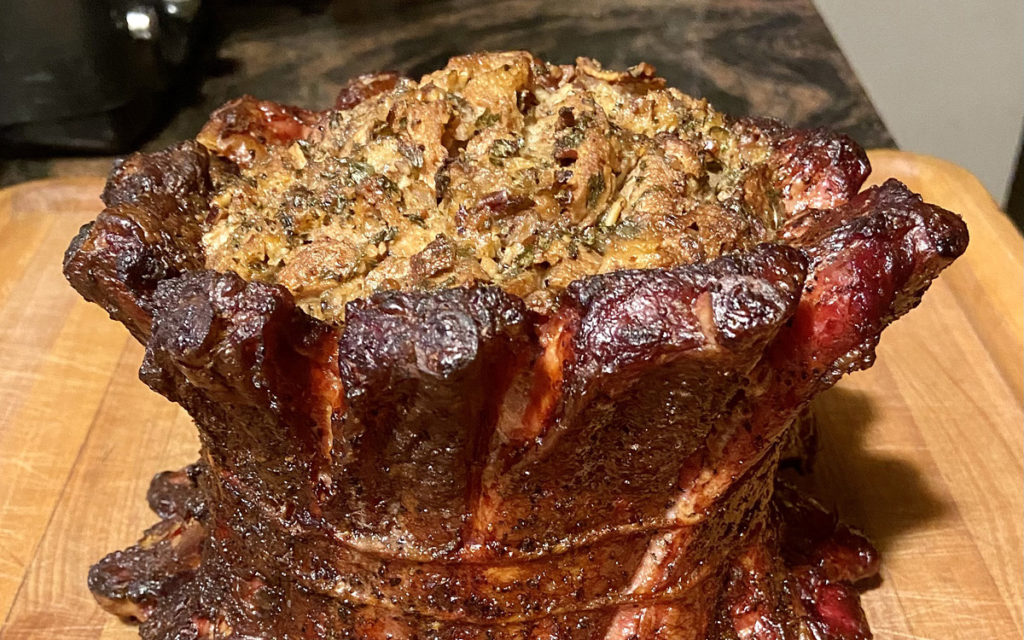 One of the showiest holiday meats is crown roast of pork. This majestic-looking roast, made by bending two racks of bone-in loin chops until they form a circle, generally weighs between 8 and 12 pounds and feeds up to 12 people or more. This year, of course, few of us will be expecting a crowd at our table, which is why we were so intrigued by a preparation that was shared with us on Steven’s Facebook fan page by Cat Johnson. Constructed with baby back ribs, this circlet of meat—still mighty impressive—is not only less expensive and more approachable than a traditional crown roast of pork, but is perfect for a smaller gathering.

Credit for this ingenious idea goes to John Shepard, aka “Sir Porkalot,” who generously shared his technique with us. This Ohio-based entrepreneur owns a small but award-winning barbecue rub company called Naturiffic. (His Q-Salt seasoning was named one of three top rubs in the country in a contest sponsored by Barbecue News magazine. John is also the founder of a Facebook group known as BBQ Pitmasters – Novice to Expert, and graciously shared that Steven was one of the reasons he’s developed such a keen interest in barbecue.

Here, in John’s words, is how he makes his version of crown roast of pork using baby back ribs.

A crown roast (or rack) of pork is a traditional holiday preparation using the whole bone-in pork loin roast.

The pork loin gets formed into a circle, with the rib tips up; the bones are usually frenched, meaning the meat and fat from the bones is removed before roasting. Stuffing is optional, and is baked in the center of the crown.

You can have your butcher prepare one for you or you can do it yourself.

How to Make a Crown Rack of Ribs

Since loin back ribs (aka baby backs) are basically the same thing, minus the loin, you can make an inexpensive version from a rack of ribs.

The photos below show the progression from the rack of ribs to the crown rack of pork ribs along with the accompanying steps.

The ribs were seasoned with Q-Salt from Naturiffic. (Or you can use your favorite barbecue rub.) They were cooked at 250 degrees for about 3.5 hours using a combination of red oak and cherry on my reverse flow offset smoker. The stuffing—again, it’s optional—was made with apples and pecans. [Note: Steven’s Mushroom Bread Pudding would complement the pork, too.]

1. Obtain a rack of loin back ribs.

Obtain a rack of loin back ribs (aka baby backs); the recipe can be multiplied as desired. 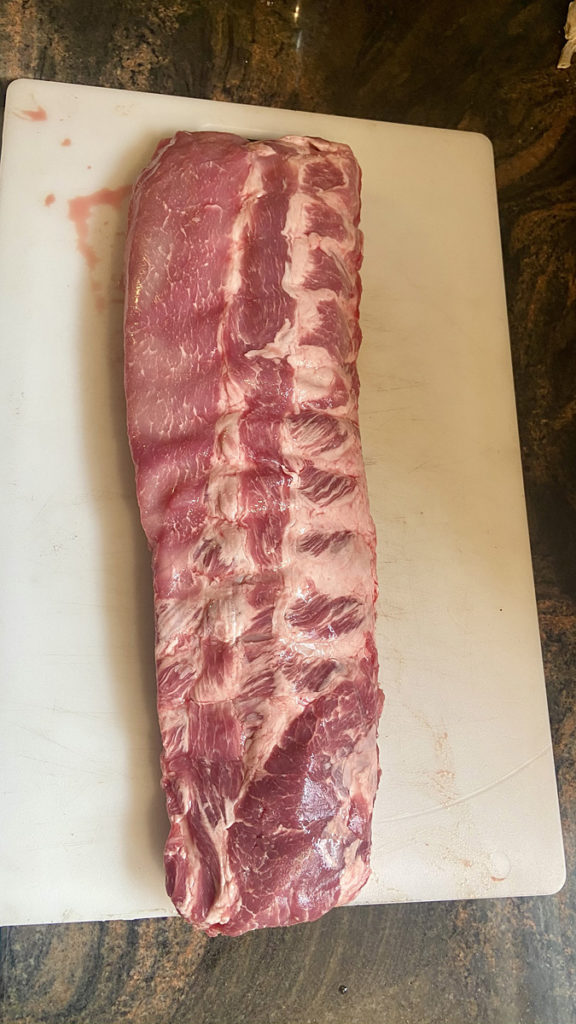 2. Turn the ribs over and remove the membrane.

Using a sharp knife, score the ribs through the back (top to bottom) between each bone. Don’t slice all the way through; you are just making a hinge. 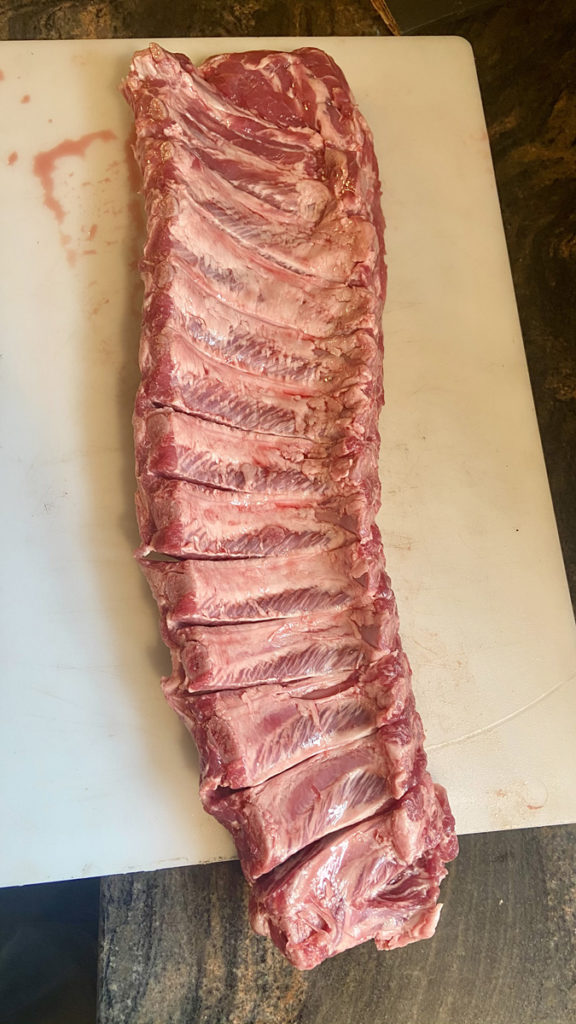 3. Form the rack into a circle.

Form the rack into a circle with the rib tips facing up (the end you can see the bone on) and the meat facing inwards (bone side out). Use toothpicks or bamboo skewers to hold the meat in place until the next step. 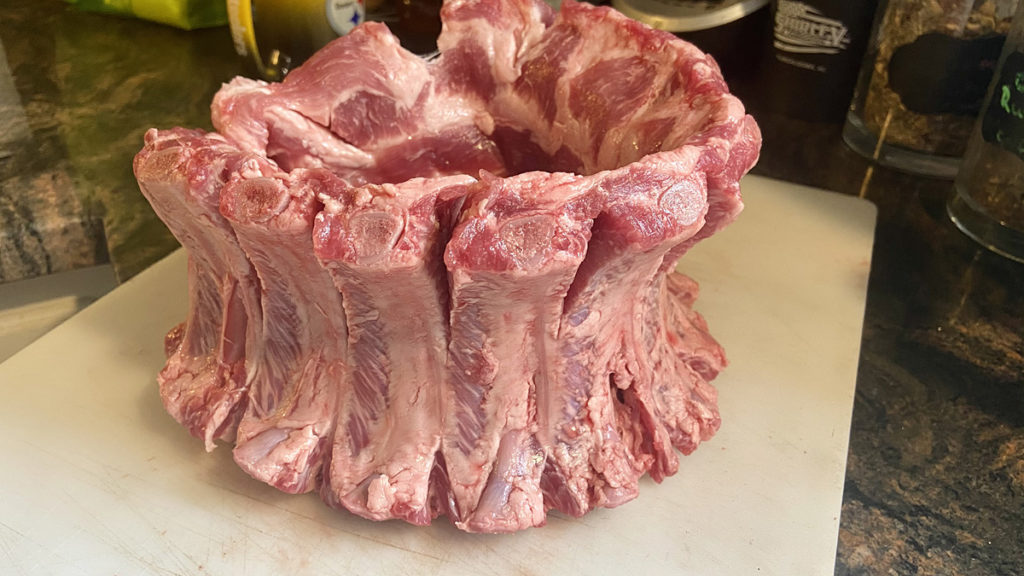 Season well, (again, I used Naturiffic Q-Salt) and then tie with butcher’s string to help it hold its shape while cooking. 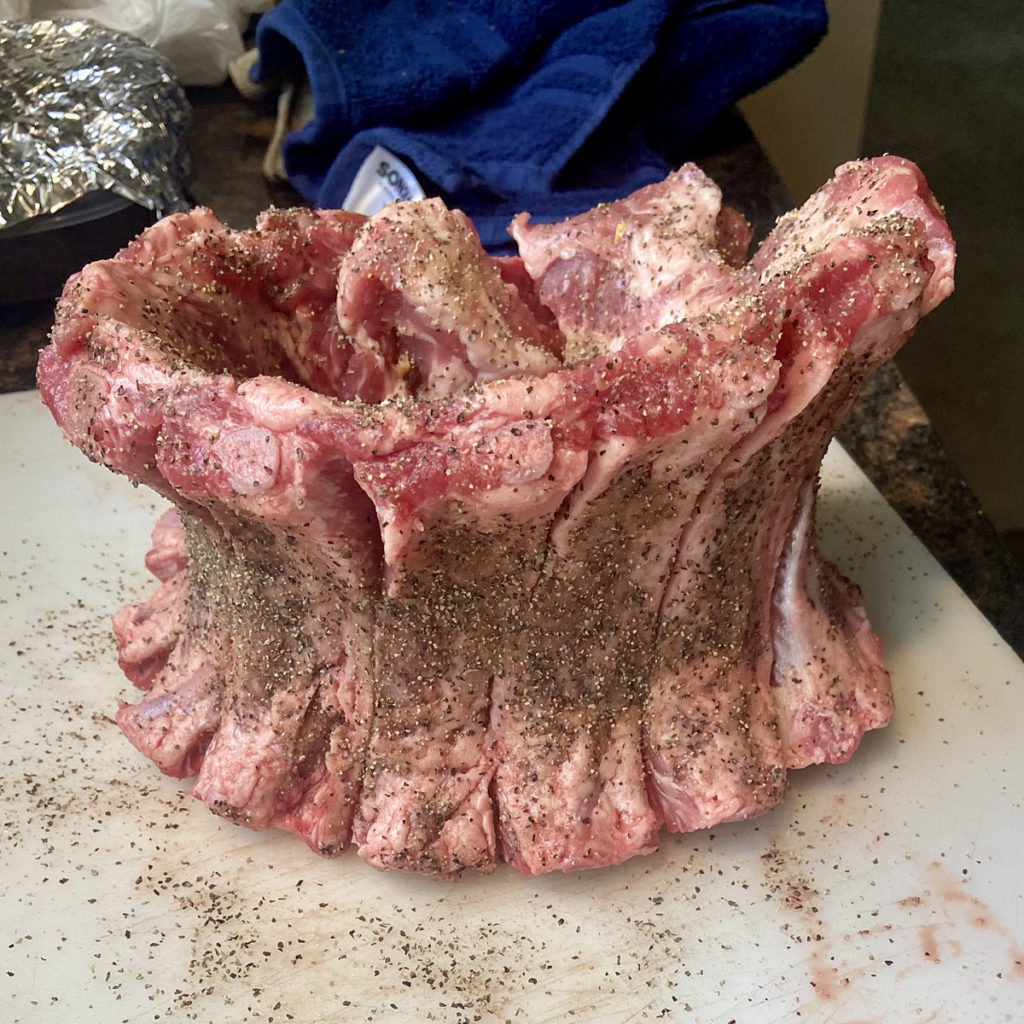 5. Stuff the crown of ribs with your dressing of choice. 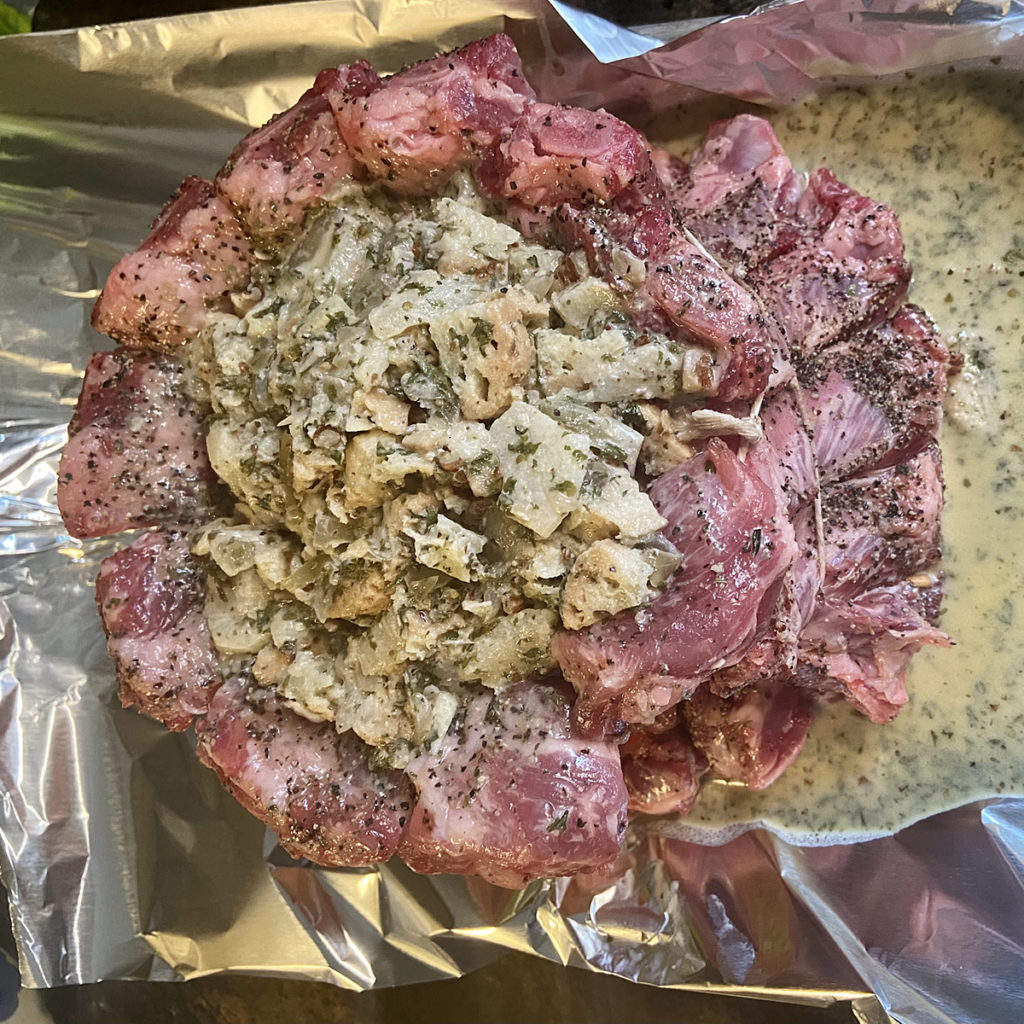 The smoker was fired up to 250 degrees using red oak and cherry wood and the crown of ribs was placed in the smoker. (Again, remove the foil so the flavorful smoke isn’t impeded.) 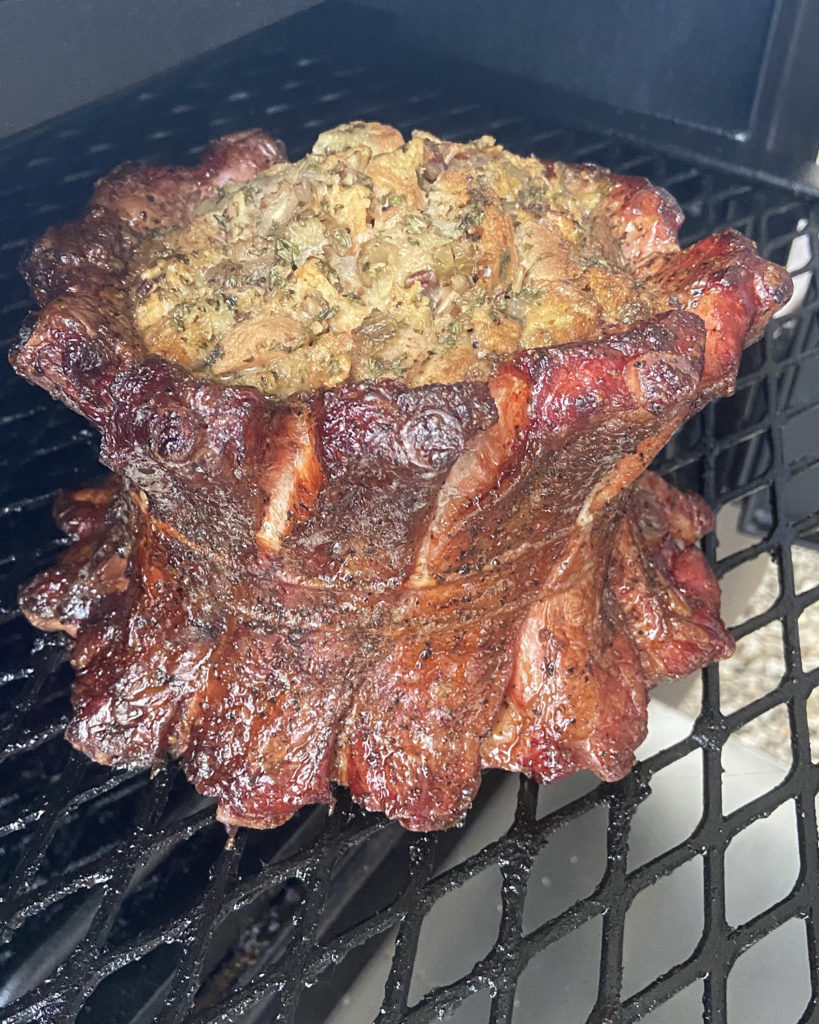 7. Smoke the crown rack of ribs until it reaches an internal temperature of 185 degrees.

Once the meat hit an internal temperature of 185 degrees, I took it off the smoker to rest for 20 minutes. 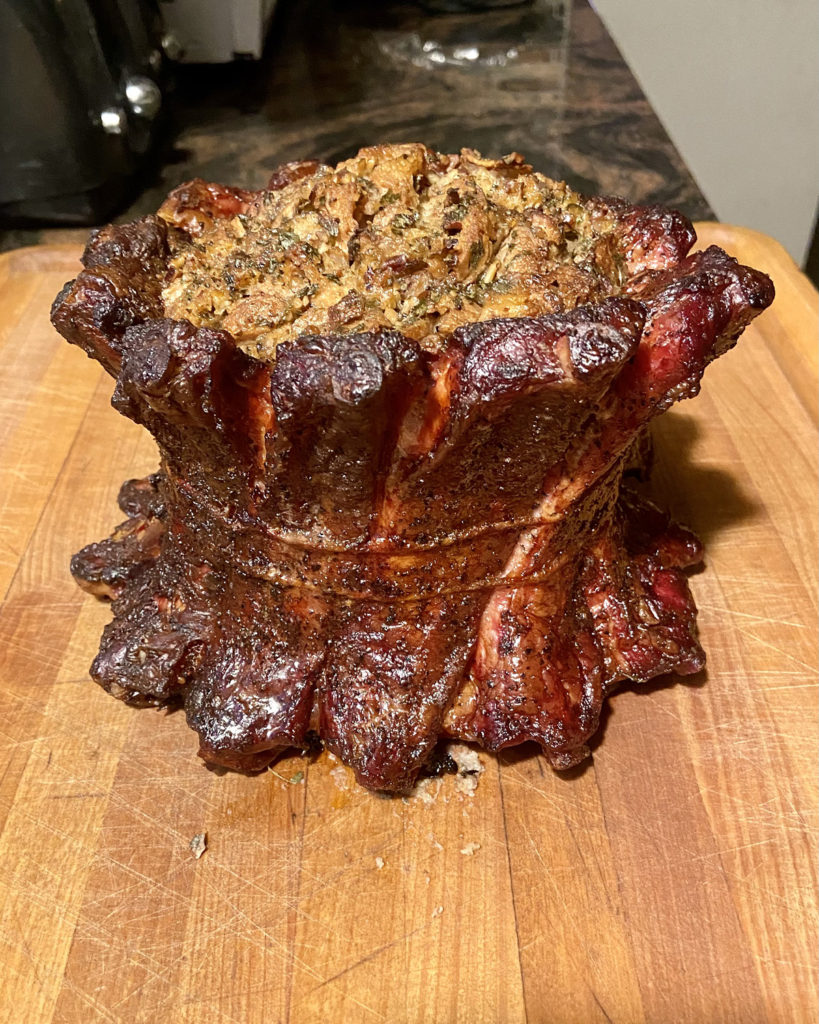 8. Slice the bones apart and enjoy! 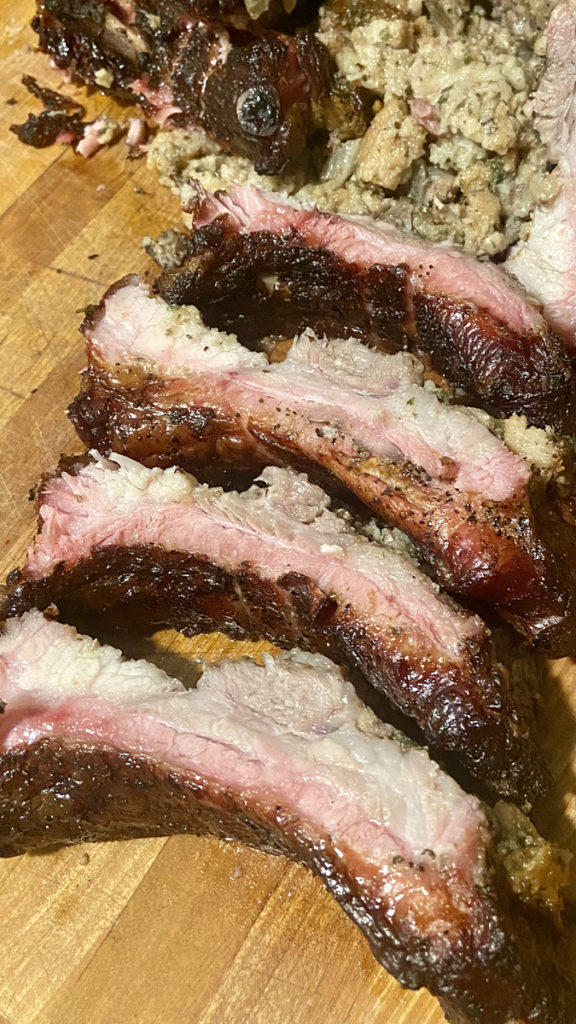