Black Smoke: African Americans and the History of the United States of Barbecue

Every once in a while, you come across a book so startling, so original, it makes you rethink your understanding of a subject you’ve studied for 25 years.

Such a book is the new Black Smoke: African Americans and the United States of Barbecue by Adrian Miller. 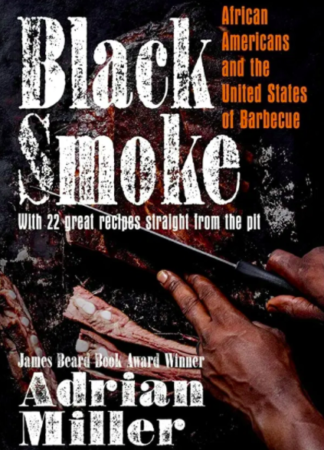 I’ve acknowledged the enormous Black contribution to American barbecue in previous books, of course, and have written about African American pit masters in newspaper articles and blogs.   But I was never quite able to put names and faces to these legions of “barbecue kings” (as pit masters were called in the 19th century) who laid the foundation for modern American barbecue.

Lawyer, public policy adviser, and soul food scholar Adrian Miller has done just that in his fascinating book, and in the process, has rewritten the history of American barbecue.   His stories are mouthwatering, sometimes heartbreaking, and always inspiring.   Black Smoke is a must read for anyone who cares about this distinctly American culinary art.  The recipes, like Old Arthurs’s Pork Belly Burnt Ends are pretty awesome, too.

I know you’re a certified barbecue judge and great barbecue enthusiast.    Did you grow up in a barbecue family?   What prompted you to write this book?   Why now?

OK. I have to admit something that might lose me all street cred on this subject: I grew up in the suburbs of Denver, Colorado. Hold on, let me win you back. My late mom is from Chattanooga, Tennessee, and my dad is from Helena, Arkansas, so, barbecue was a vibrant part of my family’s food traditions. We rarely went out for barbecue. We cooked it at home on the major holidays, family reunions, and church outings during the summer. I was moved to write this book after noticing that African Americans were notably absent from television shows on, and magazine articles about, barbecue. Given barbecue’s tremendous popularity, I wanted to remind people of the significant contributions that African Americans made to this cuisine. 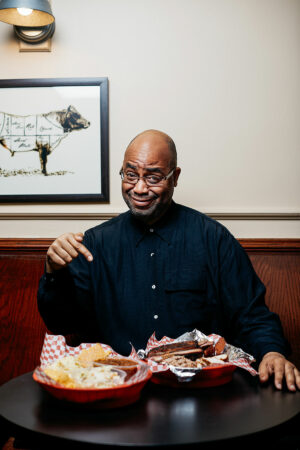 What are some of the most important contributions the Black and African American communities have made to the United States of Barbecue?

By the 1700s, African Americans were southern, or pit, barbecue’s “go-to” cooks. This type of barbecue fused African, European, and Indigenous meat cooking and seasoning techniques, and enslaved African Americans perfected it over a couple of centuries. After Emancipation, African Americans were recruited and sent to every part of the country to make authentic southern barbecue at all kinds of special events. In many cases, they stayed and kick-started a community’s barbecue restaurant scene.

What were some of the most surprising things you discovered about African American barbecue over the centuries?

A few things come to mind, and some are “duh” moments. I didn’t know how deeply barbecue was tied to slavery. Old school barbecue is so labor intensive—digging the pits, chopping the wood, butchering, processing, and cooking the animals—that the massive feasts were mainly possible because enslaved African Americans did the work. I had previously bought in to the idea that “southern barbecue” was all about pork. I was surprised that any whole animal could wind up on the pit including: cows (usually quartered), goats, possum, racoons, and sheep . . . anything. I was astounded that the barbecuing smaller cuts of meat, like brisket and spareribs, has only been a thing since the turn of the 20th century. It was also cool to find so many Black women who were top-notch barbecuers. That really upends the idea of barbecue as an “all boys club.”

Tell us about a few of the interesting people and pit masters you uncovered in your research.

Ah, man! So many interesting people. My short list begins with Mary John, an enslaved woman who “superintended” barbecues in 1840s Arkansas and eventually bought her freedom. She was the equivalent of what we’d call a pitmaster today. I also think of “Old” Arthur Watts. A man who was once in charge of maintaining fires on a Missouri plantation and then went on to become a legendary barbecue man in central Illinois. He lived to be 107 years old. I’ll always have a soft spot for Columbus B. Hill. Hill moved from West Tennessee to Denver in the late 1870s. He regularly did barbecues for thousands of people.

What are your six favorite African American owned barbecue restaurants in the U.S.?

What sort of response are you getting to the book?

The response has been tremendous! I’m getting a lot of emails and social media posts thanking me for writing this book and sharing a rich history that they didn’t know

You point out that even now, African American pit masters often face obstacles (financial, geographic, attitudinal, etc.) not experienced by white pit masters.   Would you tell us about these obstacles? What can white barbecue enthusiasts do to help support Black pit masters and restaurant owners?

The biggest obstacle for Black entrepreneurs is the lack of adequate funding to start and maintain their business. They often have to set up shop in run-down buildings with minimal interior decorating, they operate with limited hours, and they lack the staff to help with things like public relations. The best way to help is to patronize these restaurants and help them generate revenue. Spread the word to others. Another creative way that people can help is to volunteer professional services to restaurants they see are undercapitalized and struggling. Offer to run social media accounts for them or provide public relations work.

We know about the different regional styles of American barbecue.   Is there such a thing as an African American style of barbecue?

Even with all of the caveats and exceptions, I think there is. African American barbecue tends to feature pork (ribs and shoulder), chicken, and hot links (a very spicy sausage) The meat is less butchered (e.g., rib tips remain attached to spareribs), cooked directly over coals to give a charcoal flavor, and is served sauced. Soul food side dishes like greens and mac ‘n’ cheese accompany the standard baked beans, coleslaw, and potato salad. Add some banana pudding or a cobbler, and that is a delicious meal!

You have unearthed a treasure trove of information about African American pit masters—much of new to me (and I’ve read a lot about this history of American barbecue).   What were some of the most valuable source materials and where did you find them?

Historical newspapers are the biggest boon to my research. Newspapers capture the daily life of a community, and I’m so lucky that reporters took the time to describe gargantuan barbecues in great detail and interview the cooks.