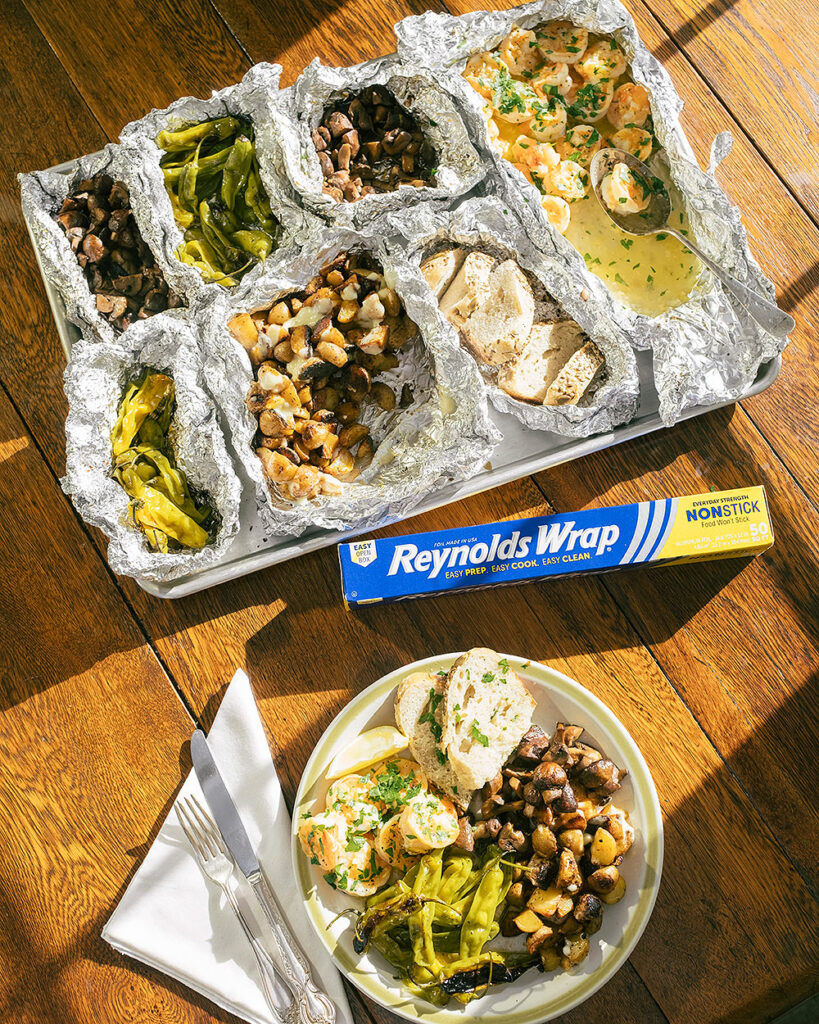 I’m excited to partner with Reynolds Wrap® Foil for this post.

Looking for an alternative to the usual barbecue fare? Throw a festive tapas party in your own backyard. Capture the flavors and conviviality of Spain’s “small plate” culture, now popular throughout the world. Reynolds Wrap® Non-Stick Foil makes it easy to prepare with little clean-up after the party. 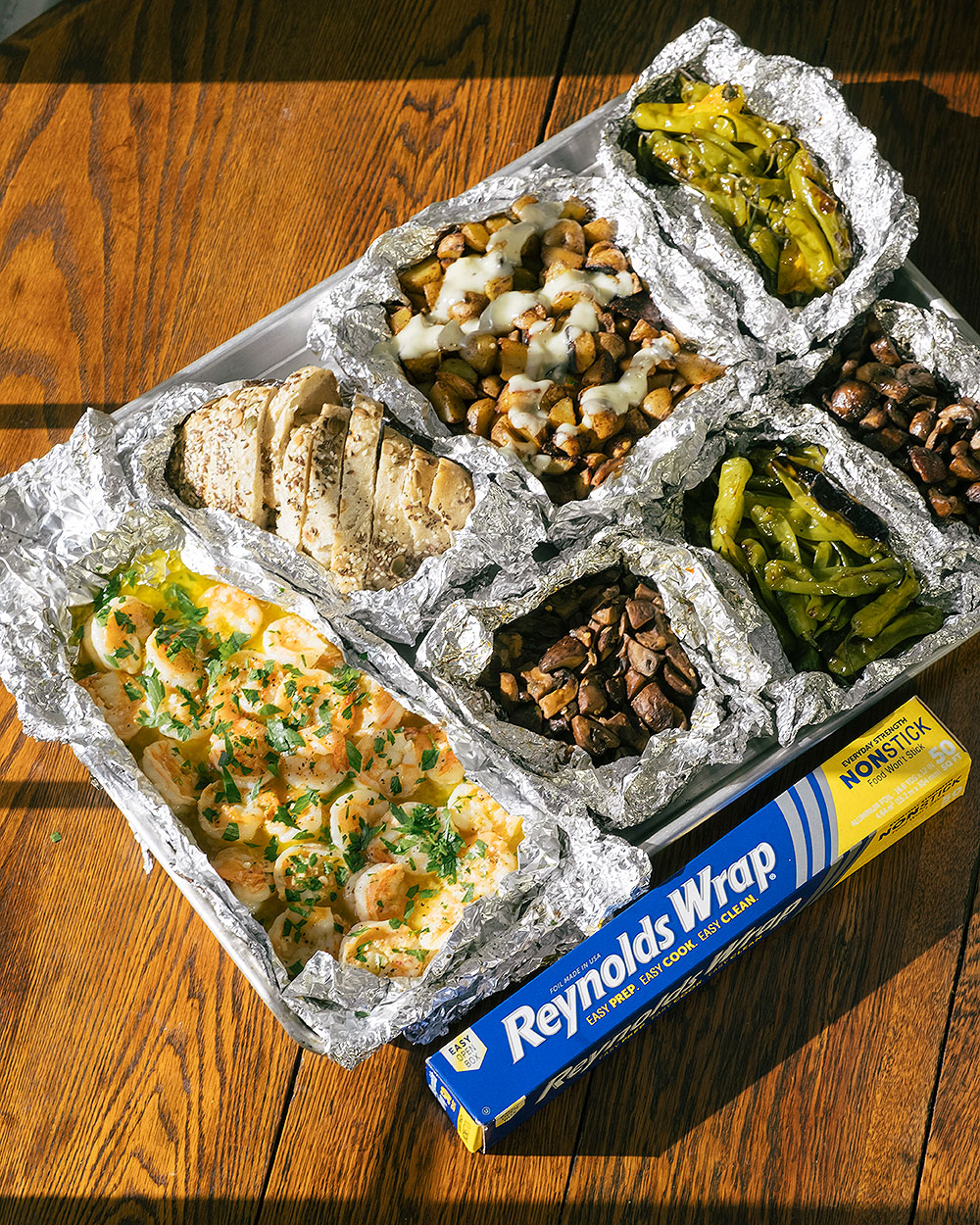 Named after the Spanish verb “tapar” (to cover), tapas were traditionally small, savory tidbits served with drinks like sherry or wine to whet the appetite for a late lunch or dinner.

How did tapas begin? One theory credits a 13th century Castilian king, Alphonso X, with popularizing tapas by decreeing that barkeeps serve snacks with drinks. Another suggests the beverages were served with small plates. Today, there are over 4,000 tapas bars in Seville alone.

This tapas array is substantial enough to be a meal in itself, or it could be a prelude to a main course like paella. I’ve selected four classic tapas, all of which can be grilled over charcoal, gas, or wood in packets. I like using Reynolds Wrap® Non-Stick Foil with this recipe as the food doesn’t stick to the foil packets. They include: 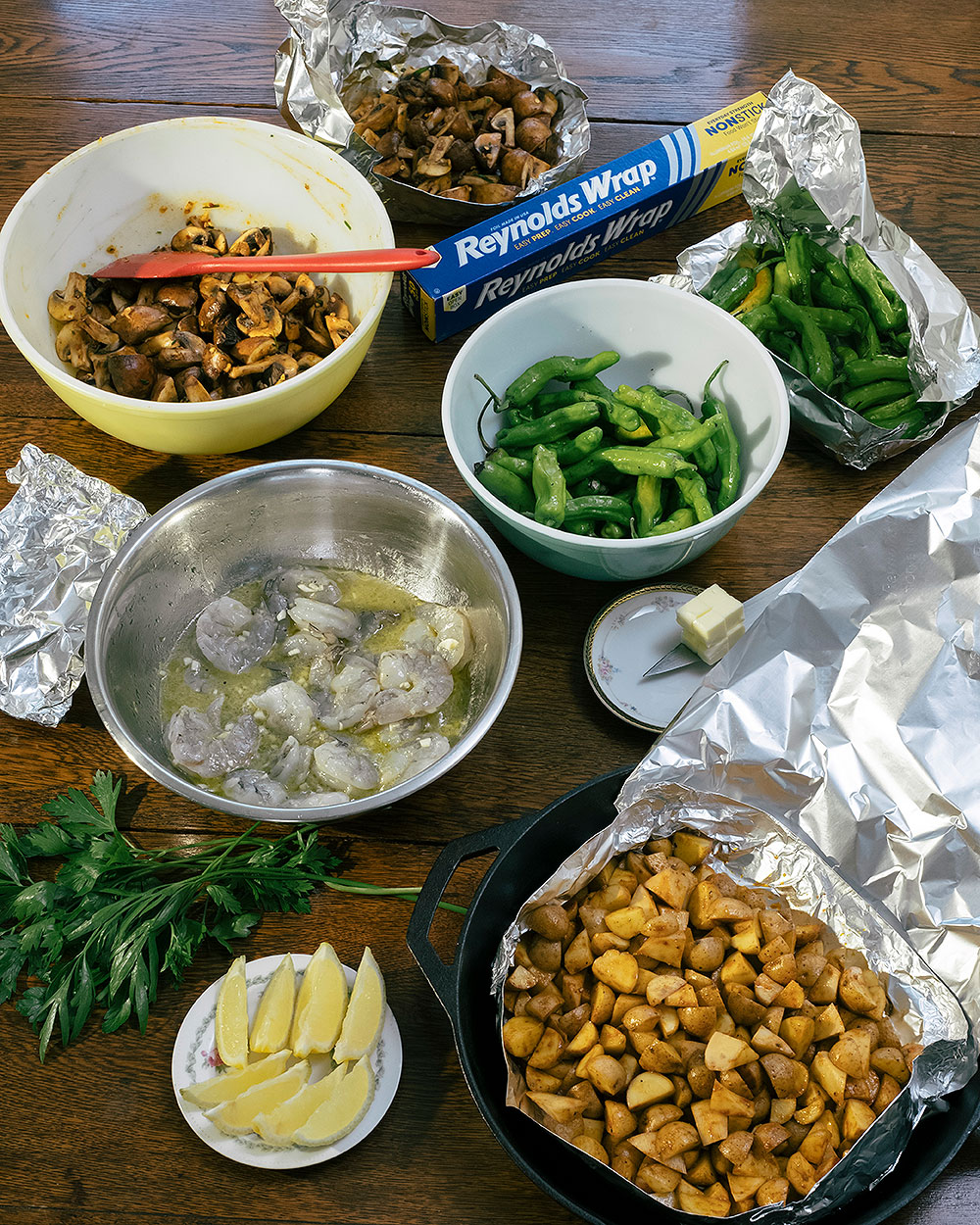 *Foiled Padrón or Shishito Peppers: Native to Spain but now available in many supermarkets and farmers’ markets, olive oil-fried Padrón peppers sprinkled with flakes of sea salt are a staple in tapas bars from Barcelona to Cadiz. Some are hot, and some are not! (Substitute shishito peppers if you cannot find Padróns. They are more crenulated, but very similar in taste.)

*Tapas Bar-Style Mushrooms: Often served on toothpicks in tapas bars (the number of toothpicks will determine your bill), these quartered button or cremini mushrooms are grilled in a closed foil packet with garlic, sherry, smoky Spanish paprika, and butter, and finished with chives and fresh lemon juice.

*Patatas Bravas: These are sometimes served with a spicy tomato-based sauce. Here, I’ve paired mini potatoes grilled in a foil packet with a drizzle of garlicky aioli. 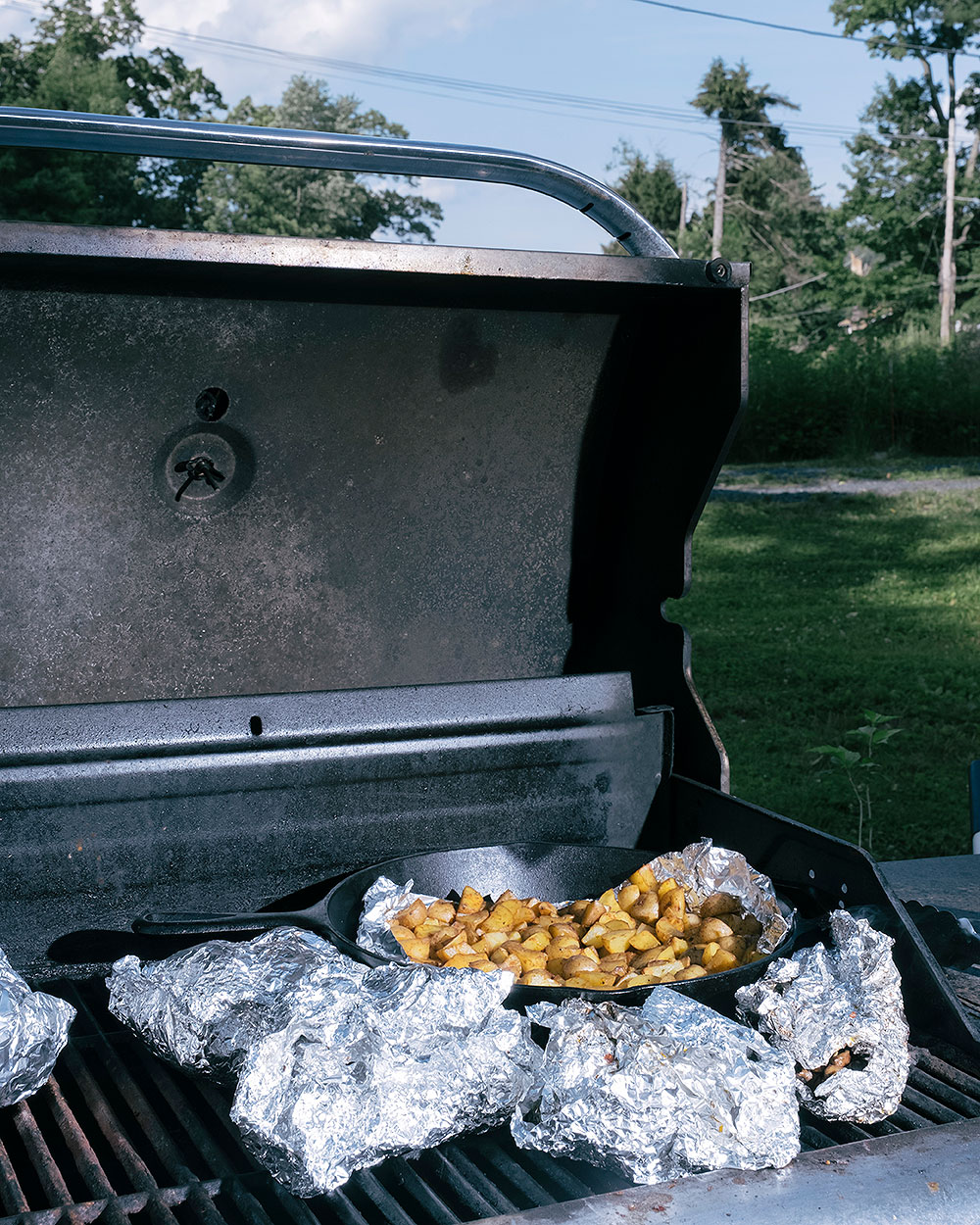 With about 5 minutes of prep for each dish, all are grilled over medium-high heat, and a bit of choreography is required if you want to serve them at the same time. The potatoes and mushrooms will take the longest to cook at 20 to 25 minutes, followed by the peppers at 12 to 15 minutes, and shrimp at 8 to 10 minutes. See the recipes for individual cooking instructions. 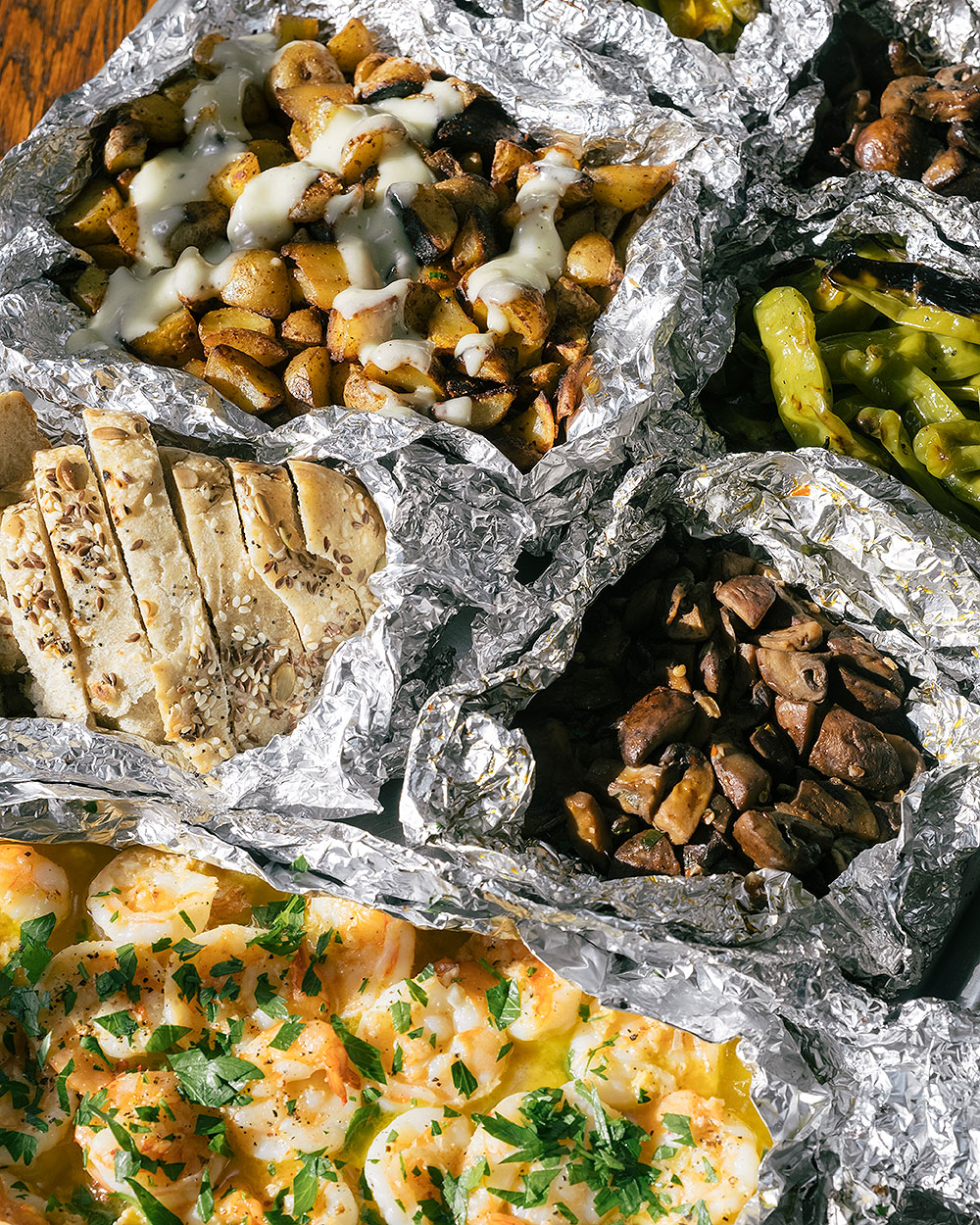 I like to assemble the cooked opened packets on a large rimmed sheet pan or platter. Serve with—what else?—a pitcher of sangria. (I also like to sugar halved lemons, limes, and oranges, then grill them on a sheet of Reynolds Wrap® Non-Stick Foil until caramelized before muddling them in the wine.) 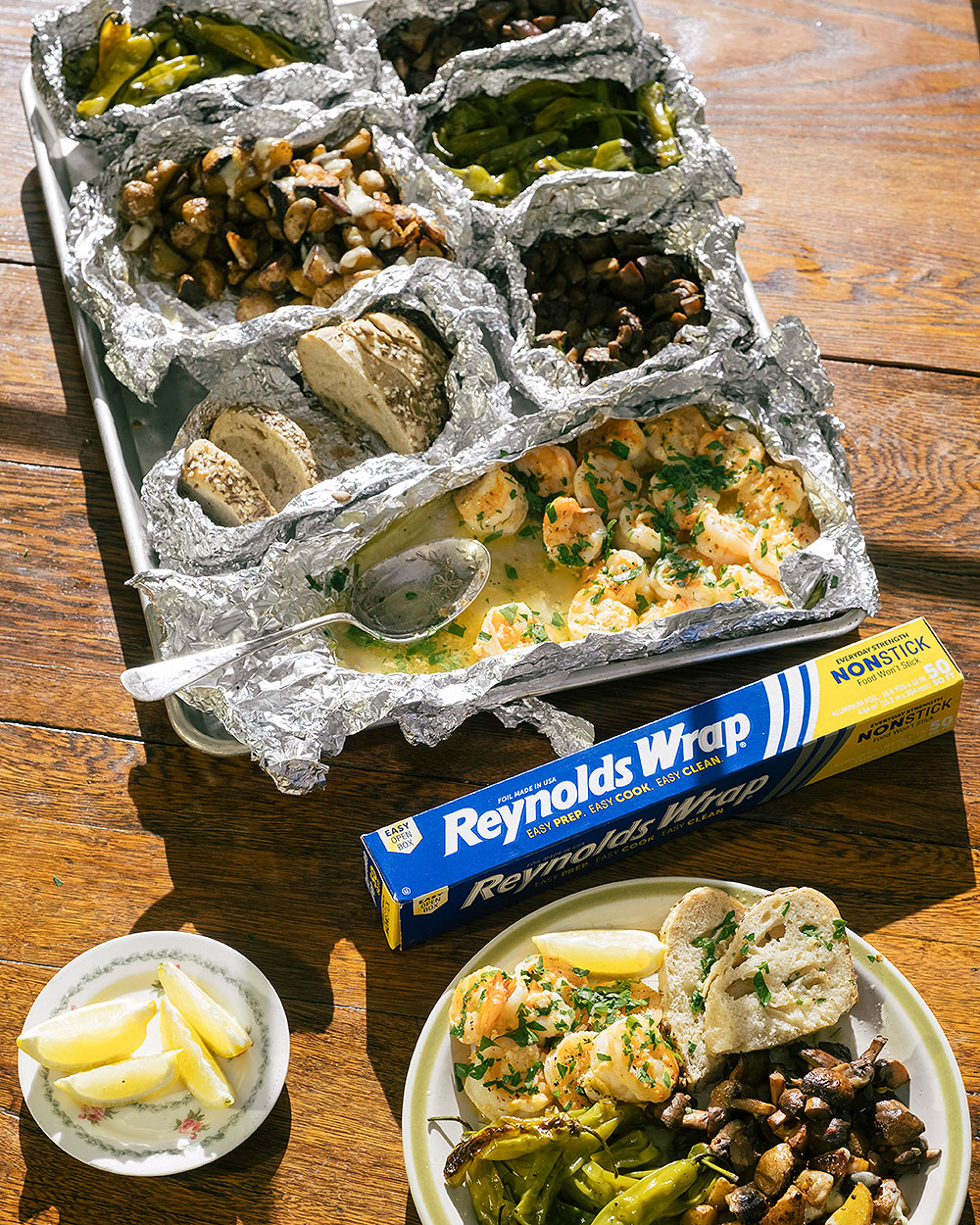 For years, Reynolds Wrap® (made in the U.S.) has been a valuable ally grill-side and in the kitchen. This sturdy foil has so many uses, and makes clean-up so much faster and easier. I especially appreciate the versatility of Reynolds Wrap® Non-Stick Foil, which true to its name, is great for stick-prone foods like fish or teriyaki wings. (Be sure to place the food on the dull side of the foil, that’s the non-stick side, the one with the watermark.) Recently, they introduced new packaging so you can find the product you want by the color on the box. It also has a handy tab that keeps the box closed for storage. 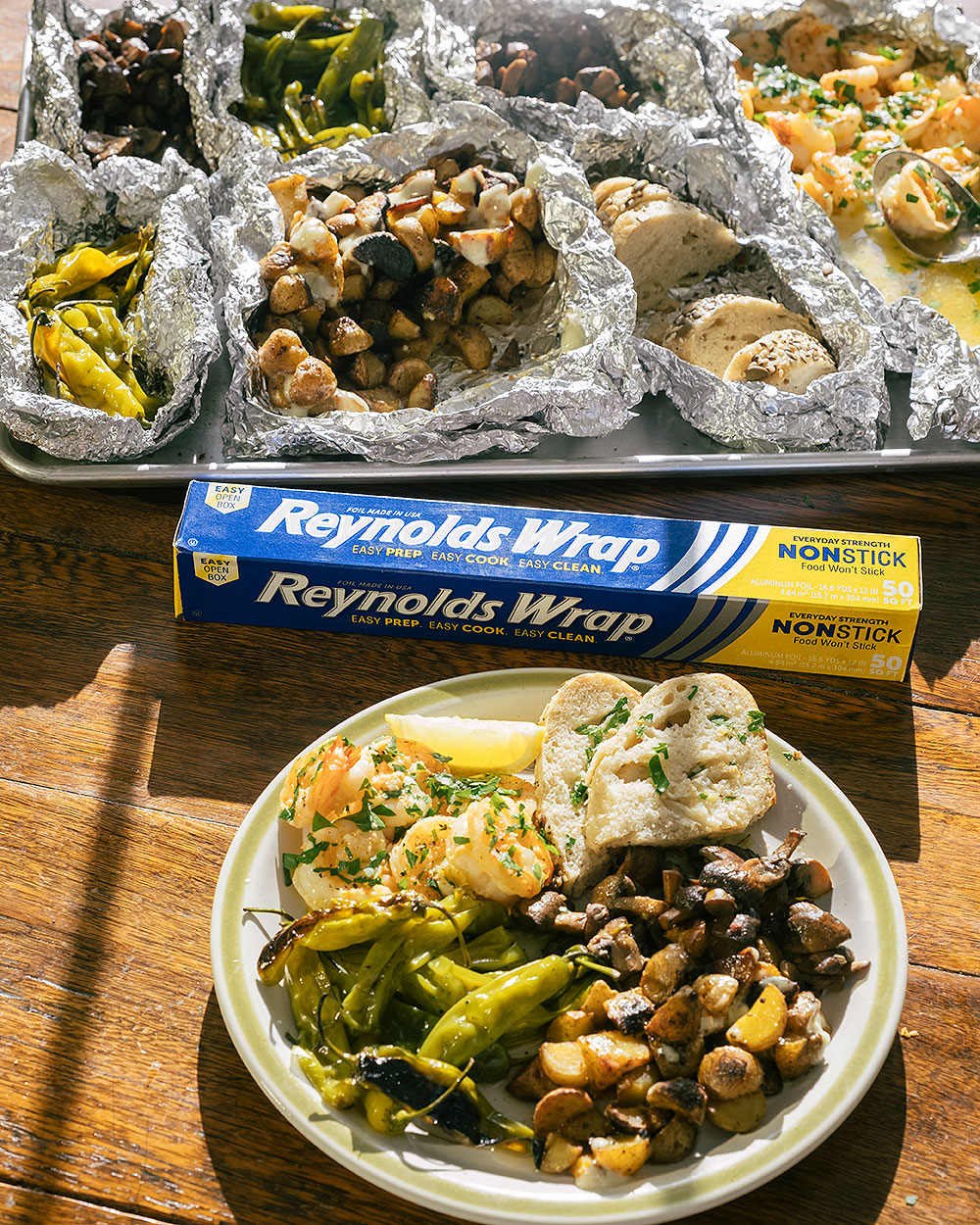