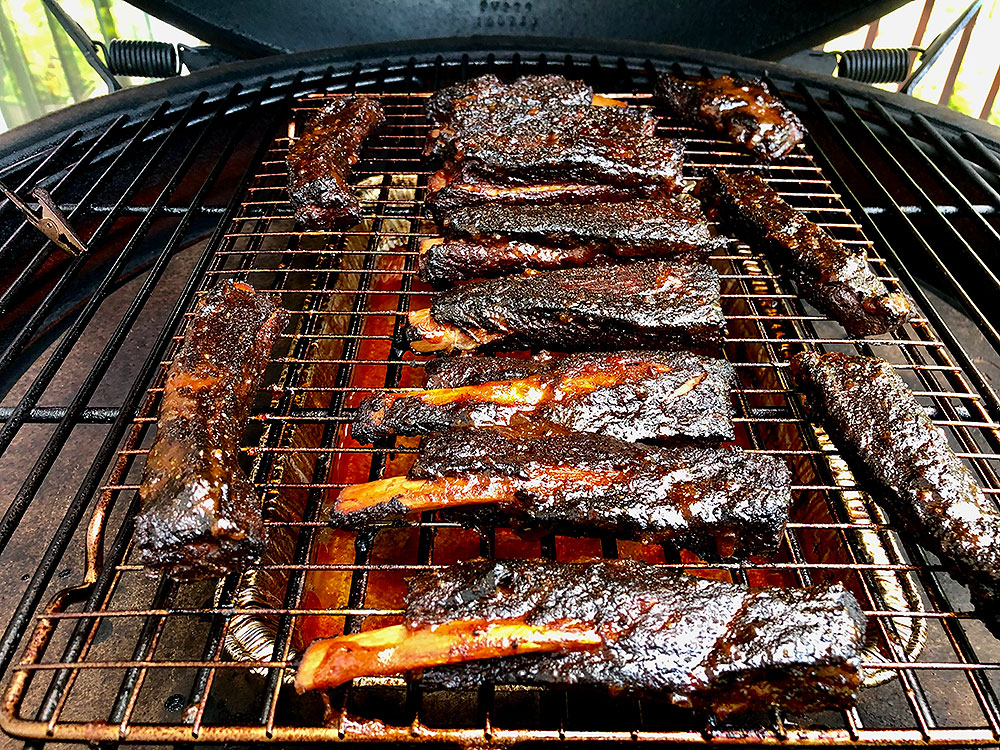 So the next way cool thing that will rock the barbecue blogosphere?

Rib Wings are made by slicing a rack of ribs into individual ribs before cooking. The process resembles how chicken wings are divided into drumettes and flats.

Which brings us to the debate as to who in the barbecue world first created the rib wing. Forbes.com writer and Barbecue University alum Larry Olmsted credits Mike Hiller with the Rib Wing (Forbes, May 2021).

I’m a diehard mad scientist when it comes to barbecue. I love experimenting when I cook. I like to see how changing the rub, the sauce, or the grill produces new flavors and textures. For example, the ribs I cook low and slow in a Big Green Egg XL will taste and look different than the ribs I hang in my Pit Barrel Cooker. Check out my “Ultimate Rib” blog to read more about my ribs experiments.

Rib Wings are my latest experiment. A rack of ribs is typically sliced into individual ribs after cooking; why not cook them that way? And why did no one think of it earlier?

How to Grill Rib Wings

Here is how my Rib Wings came together. I started by slicing a rack of St Louis cut spareribs into individual ribs. I normally remove the membrane from a rack of ribs before cooking. Slicing the ribs before cooking eliminates that tedious step per Hiller. I liberally seasoned the ribs with one of my homemade spice rubs. (You could also use Steven’s Kansas City Smoke Rub.

I then placed the ribs on a wire rack to make it easier to move them on and off the grill. I left space between each rib so the smoke would circulate evenly. My plan was to cook the ribs low and slow, spray the ribs with an apple cider vinegar mixture while cooking, and then baste with barbecue sauce at the end as outlined by Hiller.

I set up a Big Green Egg XL for indirect grilling by inserting the diffuser plate and obtained a temperature of 250 degrees. I used apple chucks to create wood smoke. After smoking the ribs for one hour, I started spraying the ribs with a mixture of apple cider vinegar, Worcestershire, and hot sauce. 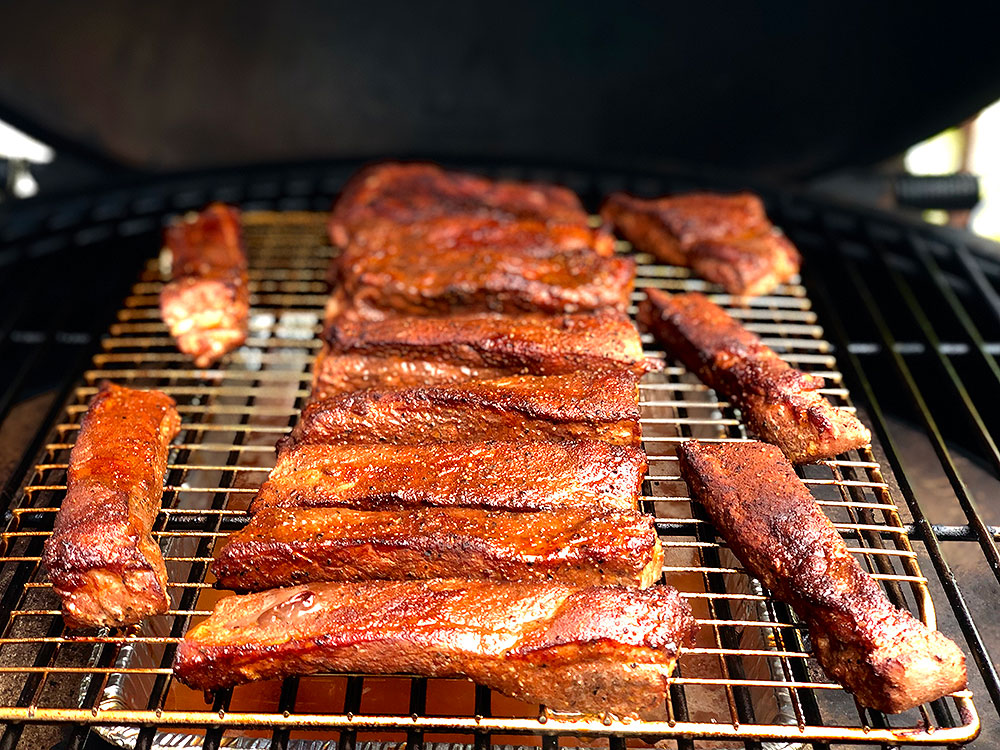 I continued to spray the ribs every 30 minutes. To finish the ribs, I increased the temperature to 375 degrees for the last 20 minutes and basted the ribs with my homemade spicy peach barbecue sauce. Total cooking time was three and half hours. I knew the ribs were done when the meat was pulled back from the bones.

Here is what I learned by cooking ribs individually. The smaller ribs cooked faster than the meatier middle ribs. The ribs from the ends of the rack were fall of the bone tender, but I prefer my ribs to hold together when I take a bite. The meatier ribs held together beautifully. The ribs developed a dark mahogany color, almost to the point of looking burnt. I feel the dark color was a result of the Worcestershire sauce in the spray mixture. The dark color occurred before I added the spicy peach barbecue sauce, so it was not due to burning the sauce. 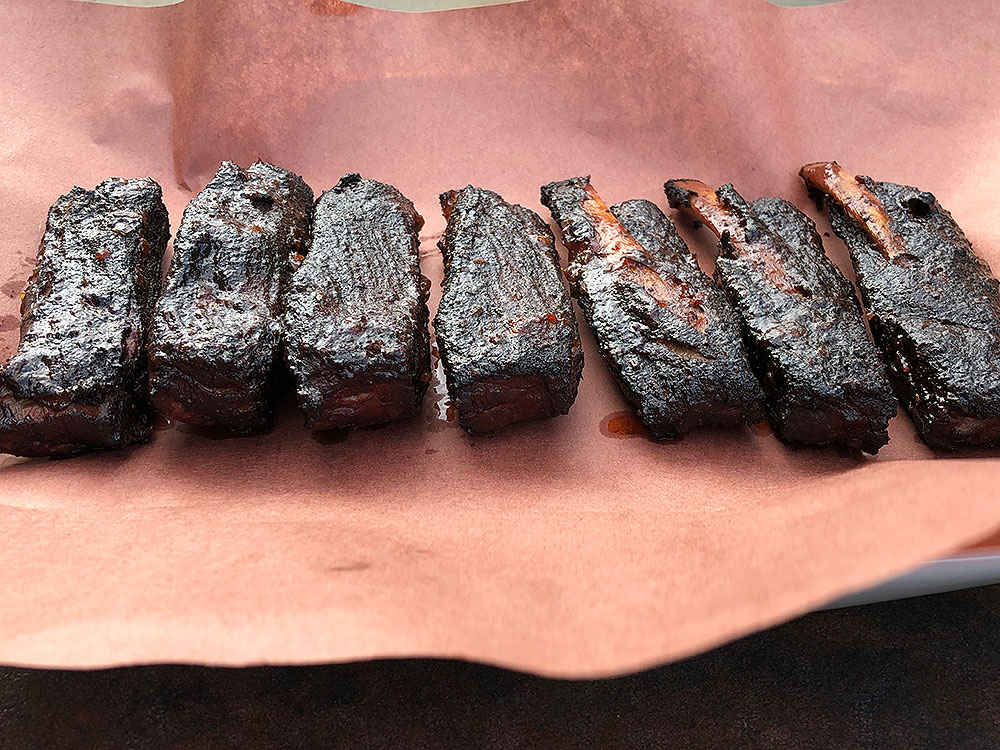 The process of seasoning and smoking the ribs individually definitely boosts the flavor compared to the whole rack method. Every bite had a heightened level of sweetness, spiciness, and smokiness. The combination of the rub and smoke created a crisp texture that reminded me of the “bark” I love on brisket. One minor shortcoming of smoking individual ribs is the smaller end ribs were a hint less tender on the inside. The most noticeable advantage to the “Rib Wing” is that each bite of the rib has a blast of flavor that comes from exposing all sides of the rib to spice rub and smoke.

I think Rib Wings would make a great appetizer for a cookout. I wondered if I could cook enough to make a meal, so I ran a second test. The second test was going to be performed on my Pit Barrel Cooker, which is one of my favorite methods to cook multiple racks of ribs or wings for a large group. I can hang 6-8 racks of ribs or cook over seventy chicken wings on the hanging skewers in the barrel cooker. I sliced the ribs and seasoned them with Steven’s Kansas City rub. Apple wood chips were added to create wood smoke. The barrel cooks at a higher temperature so I anticipated a different texture and shorter cooking time.

I wanted to skewer the ribs and hang them like I do chicken wings. After a few attempts, I didn’t feel the ribs were secure on the hanging skewers and might fall off as the meat pulls back from the bones. Disappointed, I placed the individual ribs on the grate.

Due to the higher temperature of the barrel cooker the rub and sauce caramelized and produced a sweet and smoky exterior. The aroma of wood smoke was present despite the shorter time exposed to the smoke. The time required to cook the larger ribs caused the smaller end ribs to become too crispy. The ribs developed the same dark color on the ribs as in the first test. The ribs had an appealing sweet with a little heat flavor due to the combination of Steven’s rub and sauce. The ribs held together with each bite. The only drawback? I was disappointed I could not hang the ribs. I thought it would be a cool way to cook enough rib wings for a larger group.

I enjoyed both experiments because they were so incredibly tasty. Seasoning all sides of the ribs and adding sauce elevated the flavor of the ribs. I hope this inspires you to run your own flavorful experiment.

UPDATE: We recently received an email from Mark Garetz, who in 2017, published a recipe for individual pork ribs named “Blasphemy Ribs.” (It can be found on his website, blasphemyribs.com.) Predating both recipes by hundreds of years, of course, are the red-hued individually-roasted ribs served by Chinese-themed restaurants. There are many instances in the culinary realm of “universal mind,” where similar ideas have sprung up in geographically disparate parts of the globe. Planking, hamburgers, pasta, and sandwiches are just a few examples.


Steve Nestor is the fire wrangler on Project Fire and at Barbecue University. More importantly, he’s an incredibly skilled physical therapist in the Boston area. If leaning over a hot grill or pulling heavy briskets from smoker leaves you with weak knees or a sore back, give him a call. At very least, sign up for his newsletter.