In Pursuit of the Ultimate Ribs! 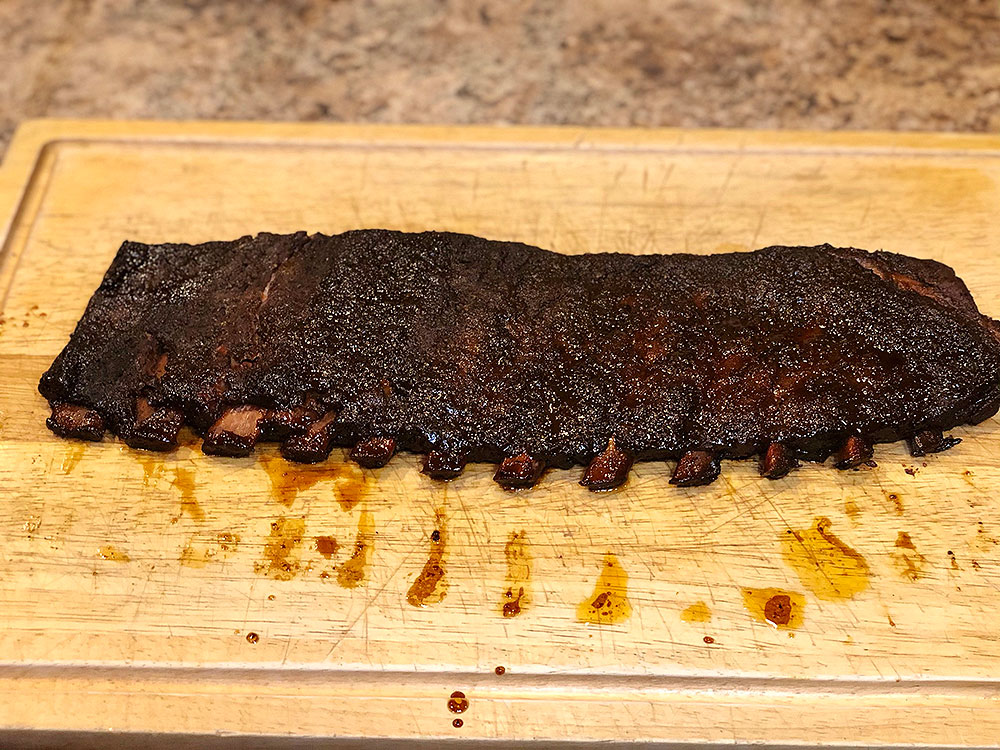 Is the ultimate pork rib something that can be achieved? I enjoy experimenting with different ways to season and cook pork ribs. There are so many approaches to making idyllic pork ribs. You must decide on the type of rib, the seasonings, the type of grill or smoker to cook on, and whether to add sauce or not.

If you are looking for inspiration for your ribs, please check out Steven Raichlen’s book, “Best Ribs Ever”.

The St. Louis-cut spareribs are my favorite due to the size and the marbling of fat. Through many tasty experiments, I have narrowed down my favorite ways to make ribs. Each method starts by seasoning spareribs with a sweet and spicy homemade rub and letting them marinade overnight. 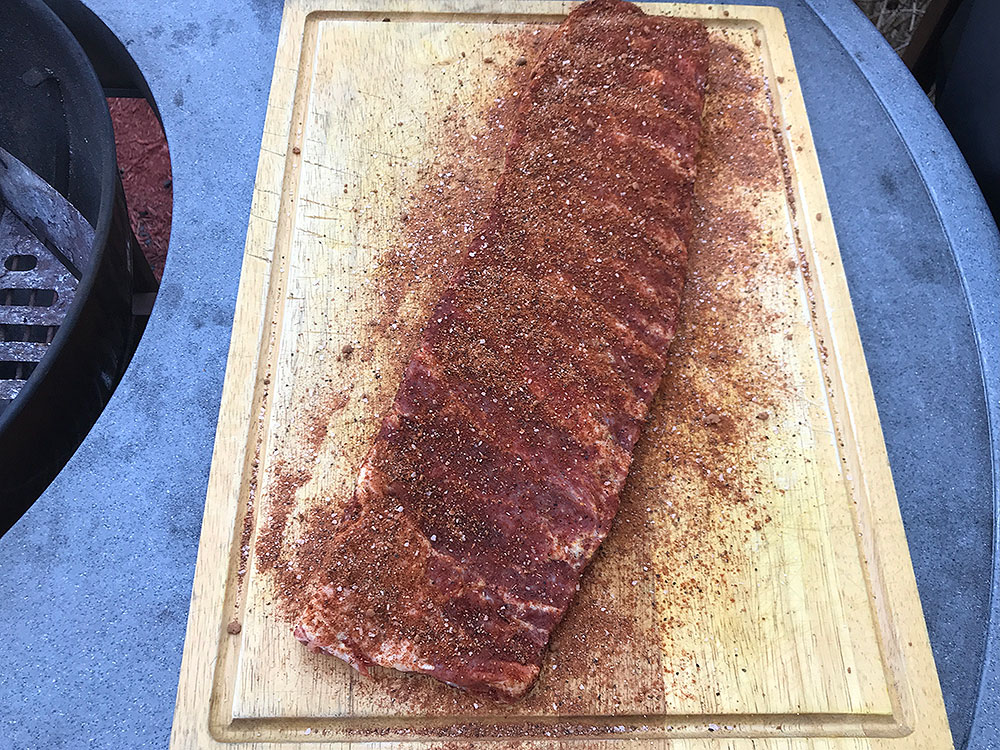 I then fill a spray bottle with an apple cider vinegar mixture which is used to keep the ribs moist while cooking. My two most utilized cooking methods for spareribs are smoke roasting them on a kettle grill or hanging them in a barrel cooker. The cooking time varies based on the method. I know the spareribs are done when they are a mahogany color, the meat has pulled back from the bones, and the ribs pass the bend test. The finished product has a balance of smoke, spice rub, and juicy pork flavor. No sauce is required. The third method I enjoy for ribs is cooking them on the rotisserie. 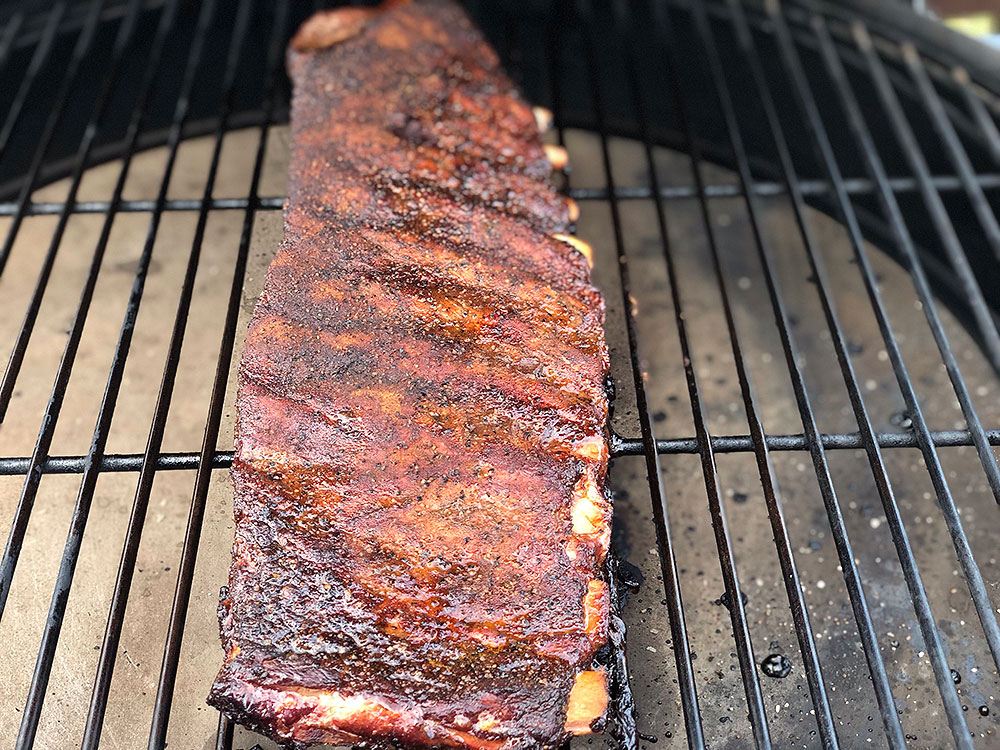 To Wrap or Not to Wrap

Recently, I read Nancy Loseke’s blog, “To Wrap or Not to Wrap Barbecued Meats” I started thinking about how I make spareribs and decided it was time to experiment. When I cook brisket, I wrap them in butcher paper to protect the bark, so I wondered if wrapping the spareribs in foil would produce the ultimate sparerib.

I had not wrapped pork ribs in foil since I was making ribs in the oven while living in an apartment after college, so I decided it was time to give it a try. Based on my research, brown sugar, honey, squeeze butter, and barbecue sauce appear to be the most popular flavoring agents to add to ribs when wrapping in foil.

The game plan was to smoke the ribs at 250 degrees for about two hours to add smoke flavor and to get some color on the spareribs, and then wrap in the foil. The spareribs were seasoned and rested overnight in the refrigerator as usual.

A Ceramic Grill was set up for indirect grilling at 250 degrees with large wood chunks to generate smoke. The spareribs were smoked for two hours with the apple cider vinegar mixture applied during the second hour at which point the color of the ribs was looking good. The spareribs were then wrapped in foil with a mixture of brown sugar, honey, and Cole’s barbecue sauce. Cole’s is a thin, spicy vinegar-based sauce from Cole’s Restaurant at the Montage Resort in South Carolina, the new home of Barbecue University. 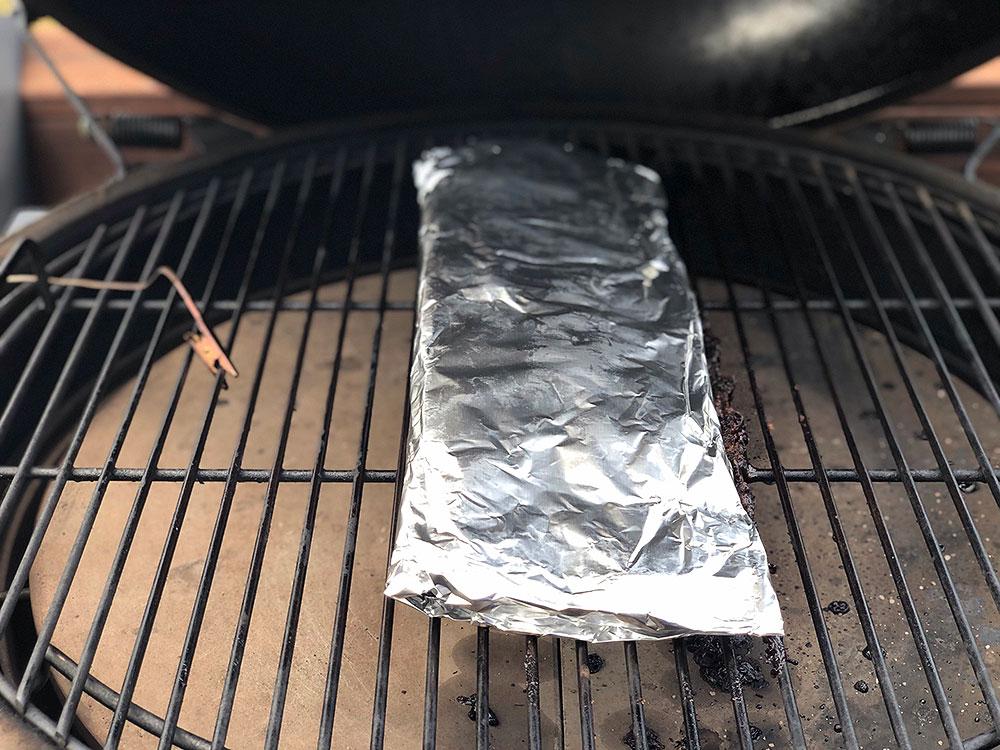 The sauce was selected to balance the sweetness of the brown sugar and honey. The thinner sauce helps provide liquid so the brown sugar and honey blend with the ribs while preventing the sugars from burning. Once the spareribs ribs were wrapped tightly in the foil, they were returned to the smoker. I could not bring myself to add the squeeze butter and go full-on Trigg’s style.

My goal was for the spareribs to be sweet with some heat from the rub and the sauce, while not becoming fall-off-the-bone tender. The ribs were tested with the bend test after one and half hours in the foil: they were close. After an additional thirty minutes, the ribs easily bent when lifted from the middle of the rack. 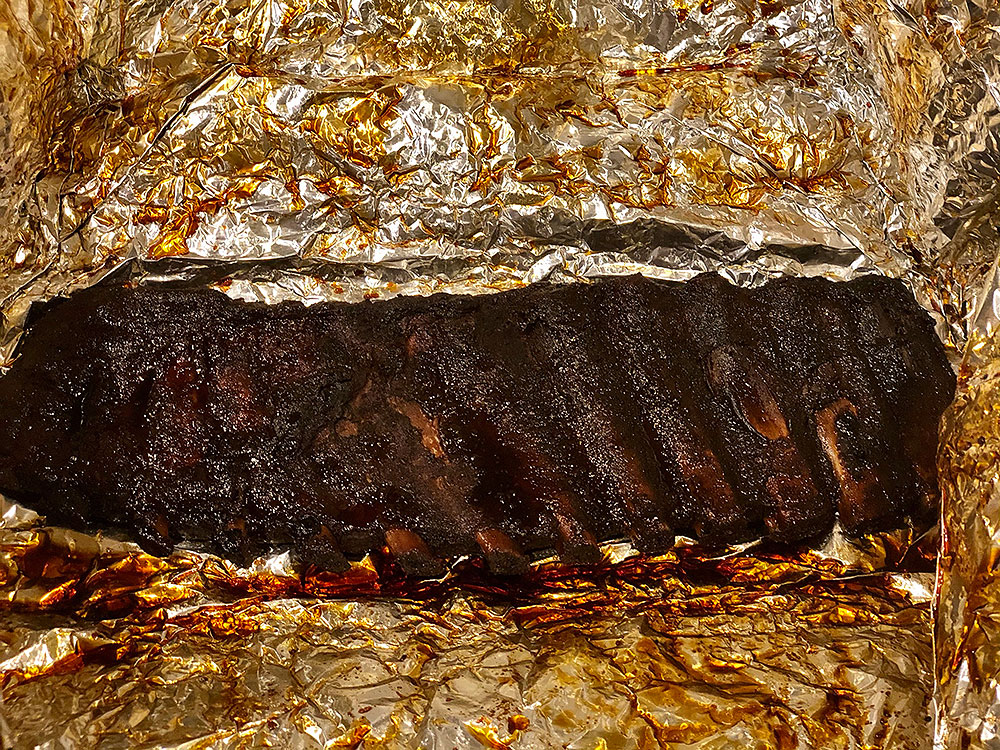 Did I have the ultimate sparerib? The spareribs were much darker than I expected, which was likely due to the brown sugar. The spareribs looked juicy, and I could see the fat had rendered out in the foil. I could feel the tenderness of the spareribs as I moved them to the cutting board, a little nervous they might be too tender.

Finally, it was time to dig in and taste the results. The spareribs had a sweet and smoky flavor. The brown sugar and honey created a crusty texture on the outside without being tough. These were the juiciest spareribs I have ever eaten. The ribs did not have the bite I prefer that is produced when smoke-roasting. If the ribs had cooked any longer, they probably would have been falling off the bone. The heat from the rub and the sauce was lost due to the amount of brown sugar and honey. I decided not to add additional sauce and return the spareribs to the grill since they were already so tender.

I was excited with the results. My wife does not normally eat ribs and she was all in on these, so that is the true measure of success. In the future, I would shorten the initial smoke time to one and half hours and reduce the amount of brown sugar to produce a more mahogany color. I would incorporate more rub and the spicy barbecue sauce in the foil to increase the heat factor and balance the sweetness. I hope this inspires you to experiment and find your own ultimate rib!