The Battle of the Steaks 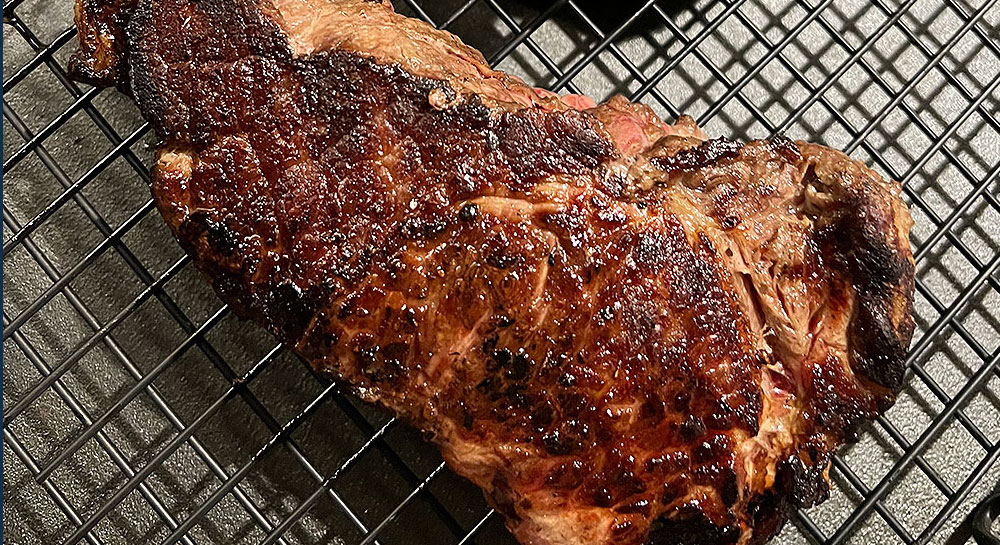 Ever since the first Vikings impaled slabs of meat on wooden stakes for roasting over a campfire (so that’s the origin of our word “steak!”), an, er, fiery debate has raged among steak lovers: which cut is superior: the ribeye or the strip steak.

Both are premium steaks that sell for top dollar at chophouses the world over. Both have their partisans—ready to defend them—steak knives raised—to the last sanguine bite. 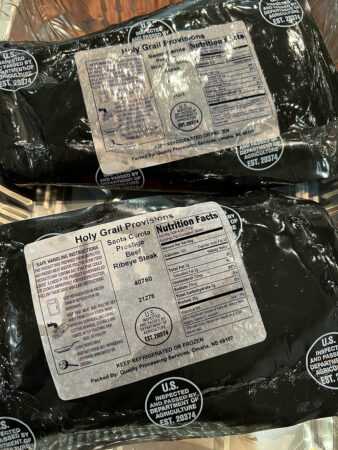 The two steaks in their Holy Grail packaging.

As the name suggests, the ribeye is cut from the steer’s rib primal. Start with a beef tomahawk, cut away the bone, and you wind up with a ribeye. Other names for this prestige steak include Delmonico and Spencer. (Australians and New Zealanders call it a Scotch fillet or whiskey fillet, while in France, it’s known as an entrecôte.) If you want to get technical, the official NAMP (National American Meat Processors Association) designation is 1112A.

The ribeye is actually comprised of several muscles, including the longissimus dorsi, complexus, and spinalis. Between these muscles are thick seams of firm white fat, which partially render during grilling, endowing the ribeye with a luscious mouthfeel. Unlike a filet mignon, the ribeye comes from a well-exercised muscle, which gives it a rich flavor, but may make it slightly chewier.

In the other corner of the ring is the strip steak, aka New York strip, Kansas City strip, and Chicago strip—sobriquets that reflect its popularity across the U.S. In NAMP speak, it’s an 1180. Picture a T-bone or porterhouse steak and remove the bone and filet mignon: what you wind up with is the strip steak. 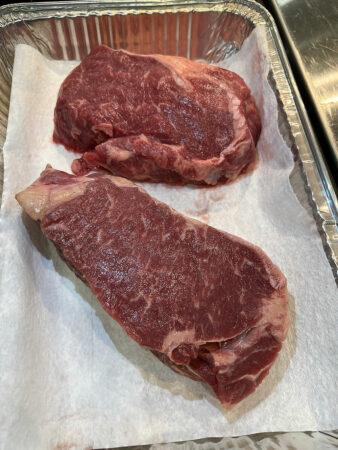 Drain the steaks on paper towels

Cut from the strip loin (located posterior to the primal that gives us the ribeye), the strip steak comes from a less exercised muscle, making the meat fine-grained and remarkably tender. It may lack the seams of fat found in a ribeye, but has a nubbin of fat at the narrow end. 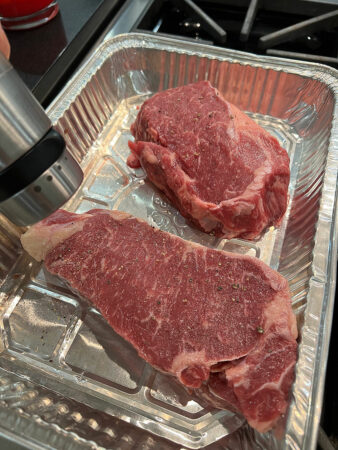 The Battle of the Steaks

To answer the question as to which is best, I organized a battle of the steaks in my backyard. For meat, we used ribeyes and strip steaks from the Holy Grail Steak Company, specifically, beef from Santa Carota steers. 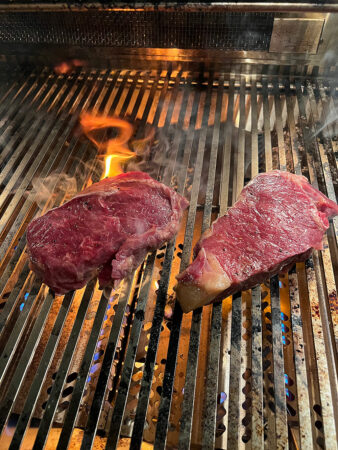 Arrange the steaks on a hot grill.

Santa Carota (literally “holy carrot” in Italian) beef comes from the Pettit family farm just east of Bakersfield, California, at the foot of Breckenridge Mountain. The family been raising cattle for three generations, and they certainly know something about beef. Instead of grain, the family feeds their cattle moisture- and carotene-rich carrots.

To keep the focus on the meat, I seasoned the steaks simply with coarse sea salt and freshly ground black pepper. To avoid any extraneous flavors, I cooked them on a gas grill to an internal temperature of 135 degrees (medium rare). Once cooked, I transferred the steaks to a wire rack over a shallow pan (the wire rack keeps the bottom from getting soggy). I rested them for 2 minutes, which allows the meat to relax and the juices to redistribute. Because the carrot-raised meat is lower in saturated fat, cooking times can be up to 30 percent less than grain-fed meat, according to Holy Grail. 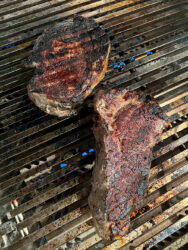 Grill until charred and crusty on both sides. 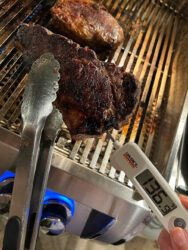 My tasting panel was comprised of the two most diehard carnivores in our family—Ella and Mia Berthin. Despite their tender age (respectively 12 and 11), when it comes to meat, these girls can eat me under the table. My wife, Barbara, and I also weighed in, not that her opinion had a lot of weight for she mostly leans vegetarian. 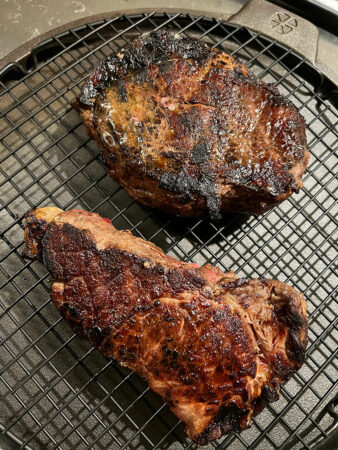 Rest the steaks on a wire rack over a pan. This keeps the bottom from getting soggy.

The panelists were asked to evaluate the steaks on the basis of appearance, tenderness, succulence, mouthfeel, flavor, and overall deliciousness. The scores were closely aligned and the results were unanimous. The hands-down winner was the strip steak. “The ribeye was rich and beefy,” said Mia, “but it wasn’t really what you’d call tender. Ella summed it up this way: “The strip steak had more flavor. Picking it was a no-brainer.” 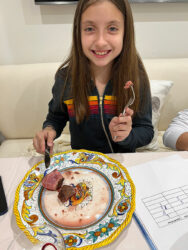 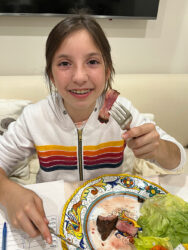 None of our panelists were able to detect the taste of carrots.