Battle of the Rotisserie Chicken—Which Method is Best? 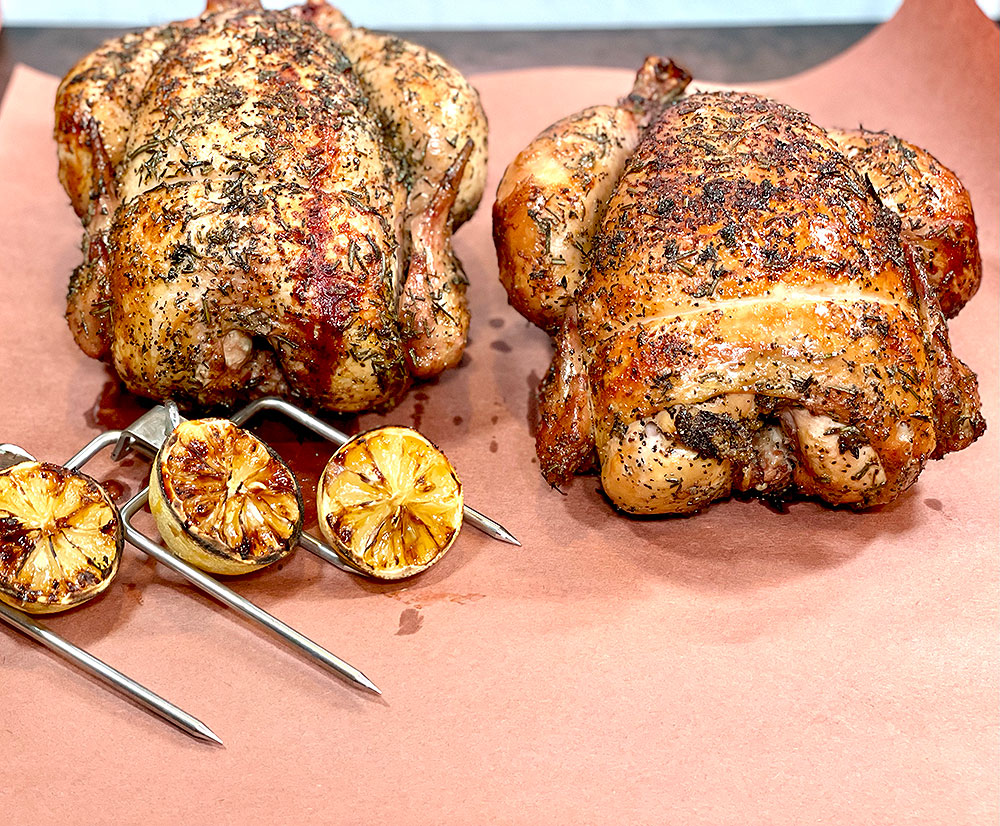 Steven Raichlen’s fans are always asking him, “what is the best way to cook ____?” Steven is quick to respond and share his expertise and advice. The questions from Planet Barbecue inspire the tests and experiments I run for Steven. Here I am going to share how I compared two different spit positions for rotisserie chicken.

My goal was to see if one rotisserie method produced a juicer chicken, crispier chicken skin, required different cooking times, and possibly learn something new that would improve my next rotisserie chicken.

I tried to eliminate all the other variables, so I used chickens that weighed the same. I prepared them with the same seasoning, used the same lump charcoal, and basically the same grill (Weber Performer vs Weber Kettle).

Battle of the Rotisserie Chicken

I started by making my herb rub for the chickens. To make the rub, I combined 1/3 cup each of finely chopped rosemary, thyme, sage, and the zest of four lemons. I make sure my knife is sharp when chopping herbs, or all the flavors are left on the cutting board. 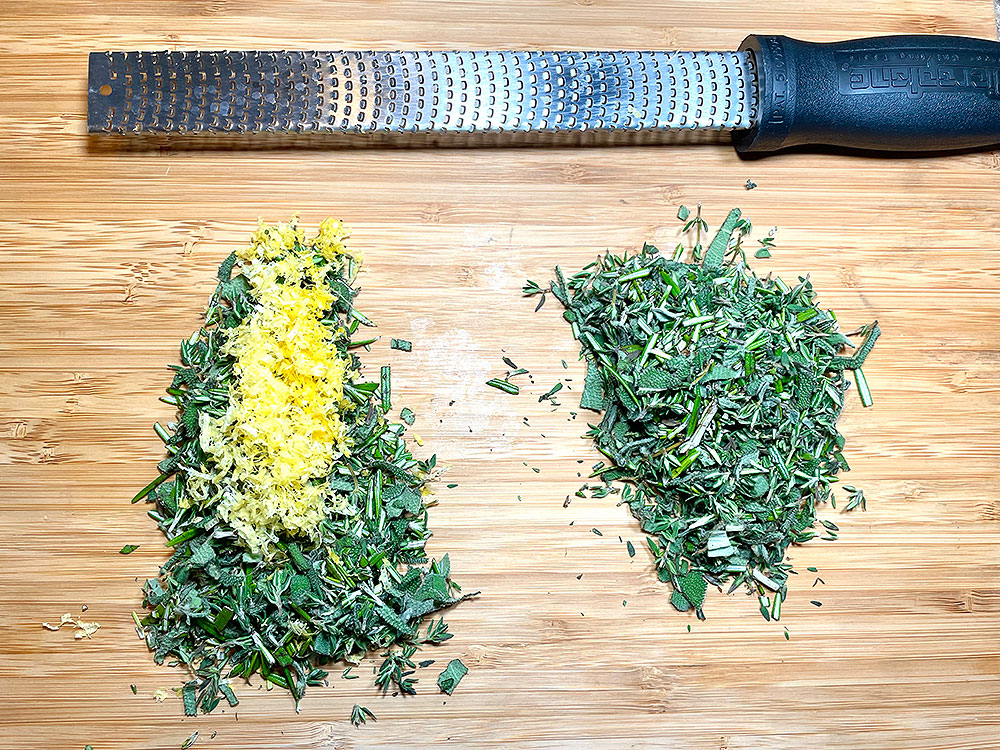 Next, I prepared the two chickens by drying them off and removing any bits from the cavity. I seasoned the inside with kosher salt and sixteen mesh black pepper. I mix equal parts of each in a shaker, and it makes it easier to season the chickens. I use the same method when seasoning brisket. I quartered the lemons and placed two lemons and 3-4 whole garlic cloves inside the cavity of each chicken.

To season the outside of the chickens, I start by brushing them with olive oil. The olive oil helps the salt, pepper, and herb rub to stick to the chickens. I used the shaker to apply the kosher salt and black pepper to the outside. Then I generously applied the herb rub. I prepared a ½ cup of rub for each chicken, knowing I would lose some along the way.

I then let the chicken sit in the refrigerator to air dry for a few hours. I think this is a crucial step to obtain crispy chicken skin. I decided against brining the chickens to minimize prep time and my rotisserie chickens have always been juicy.

I set up my Weber Performer and Kettle grill for indirect grilling and ignited two chimney starters with equal amounts of lump charcoal. While the charcoal heated up, it was time to set up my rotisserie test. 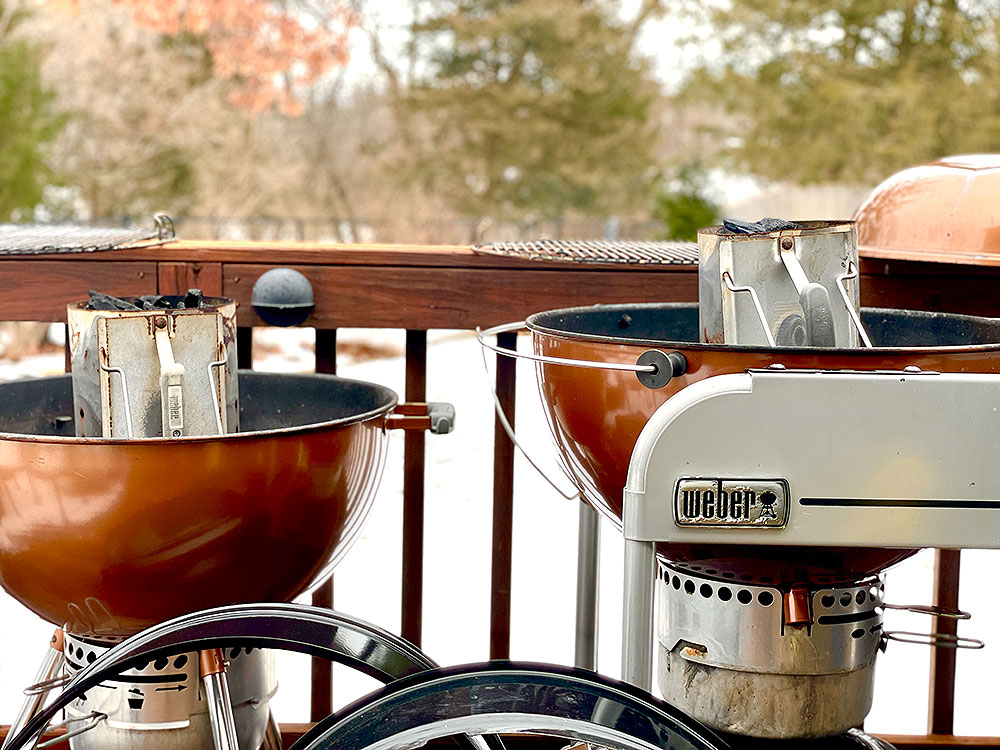 For the first chicken, I ran the spit through the cavity (top to tail).

And for the second one, I ran the spit through the side of the chicken.

The top to tail method is common and French cooking. Running the spit through the side is more common across the rest of planet barbecue. 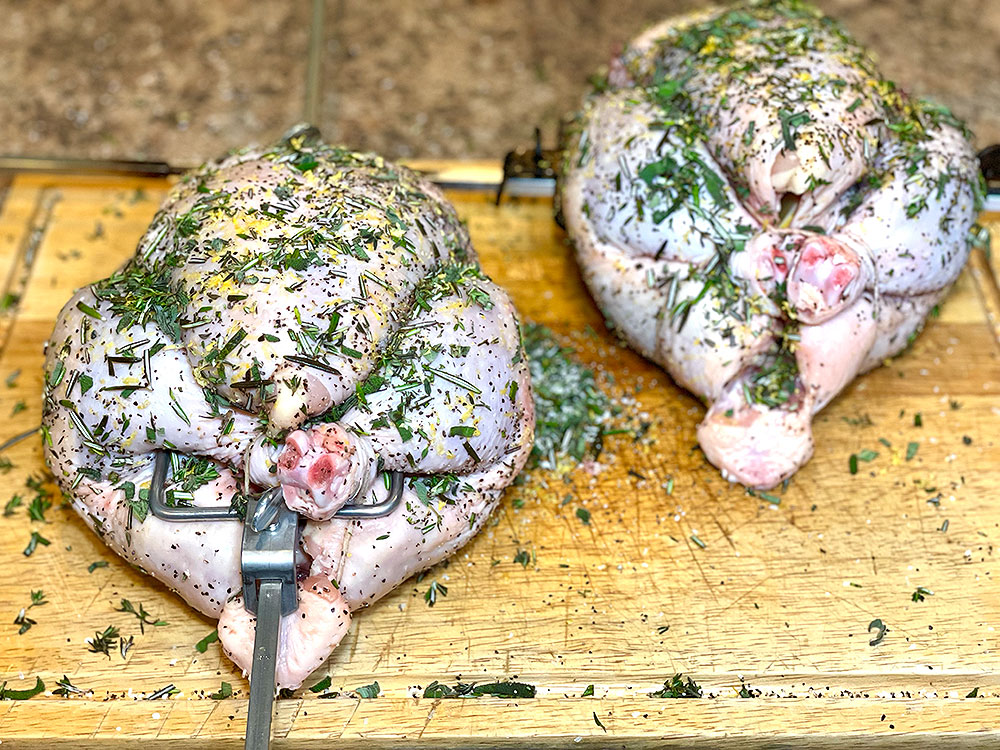 I poured the lite charcoal into the charcoal baskets in each grill, attached the rotisserie rings, the motors, and the covers. Once the grills reached 400 degrees, I placed the chickens in the grills and added a wood chunk to each basket to create wood smoke. I placed wireless thermometers in each of the chickens to track grill and chicken temperatures.

The chickens were starting to crisp up and take on a golden color after 30 minutes, and I sprayed each with a mixture of lemon juice and white wine. I continued to spray the chickens every 20 minutes. Everything was going according to my plan, but with live-fire cooking, the next challenge is coming. 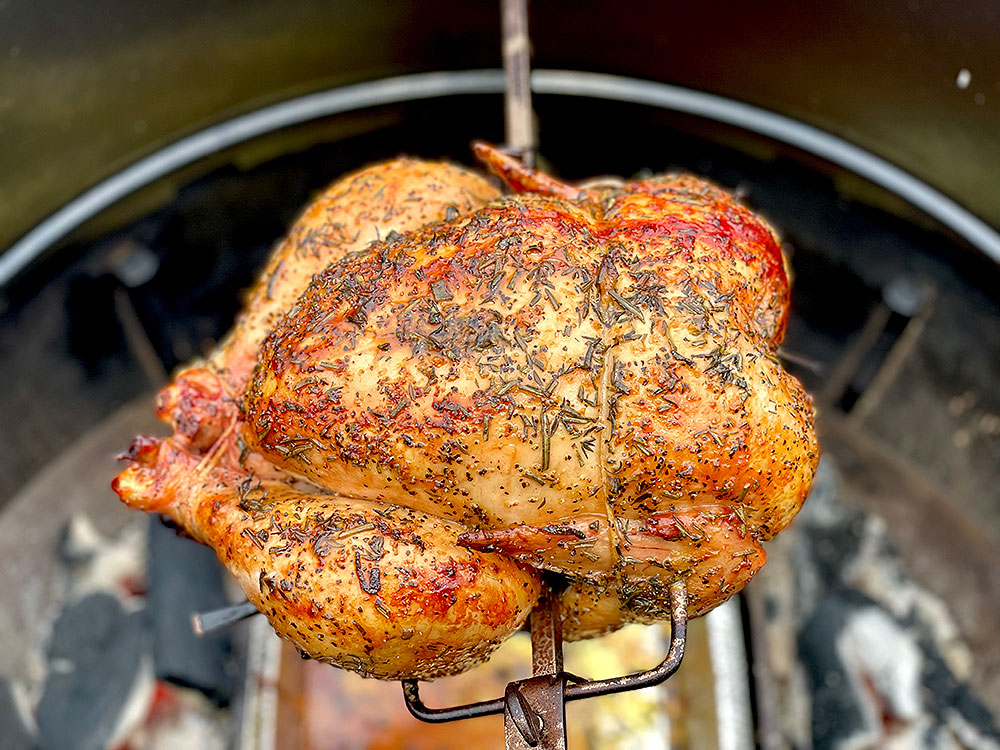 I was happy it was not raining or snowing the day I ran my experiment, but I did not anticipate such a windy day. Due to the wind, I had to start replenishing charcoal after 30 minutes. I knew opening the grills to spray with the chicken would drop the heat. I was surprised the grills struggled to get back up to temperature after the first spray, so I started to add charcoal each time I sprayed the chickens. I felt that I could keep the temperature consistent by adding additional charcoal before the temperature dropped. 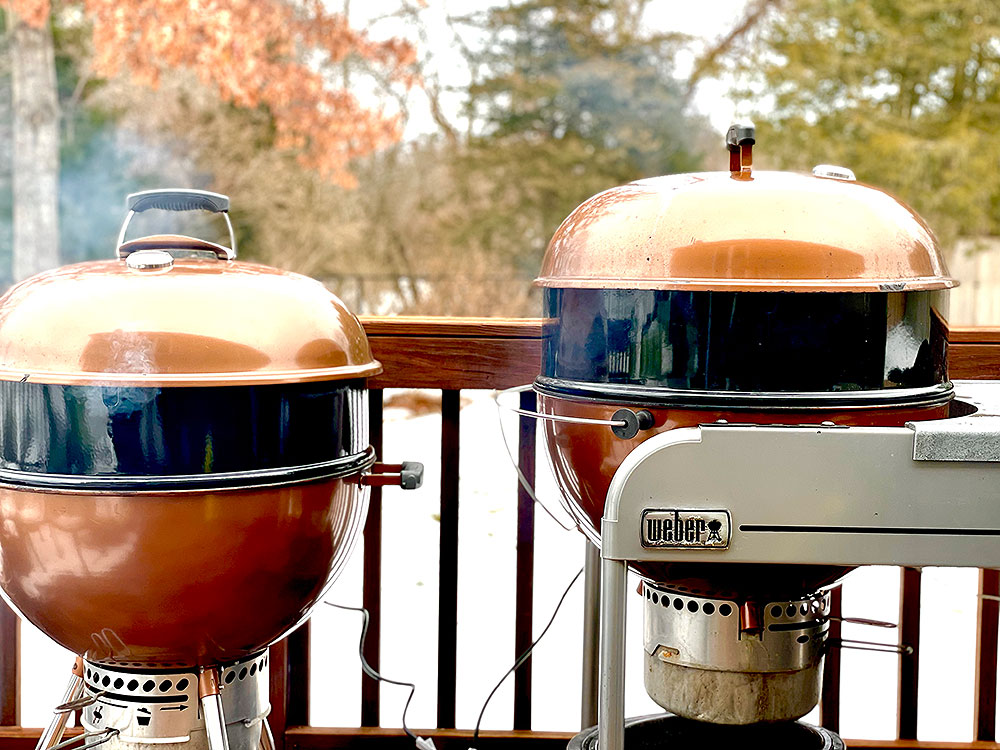 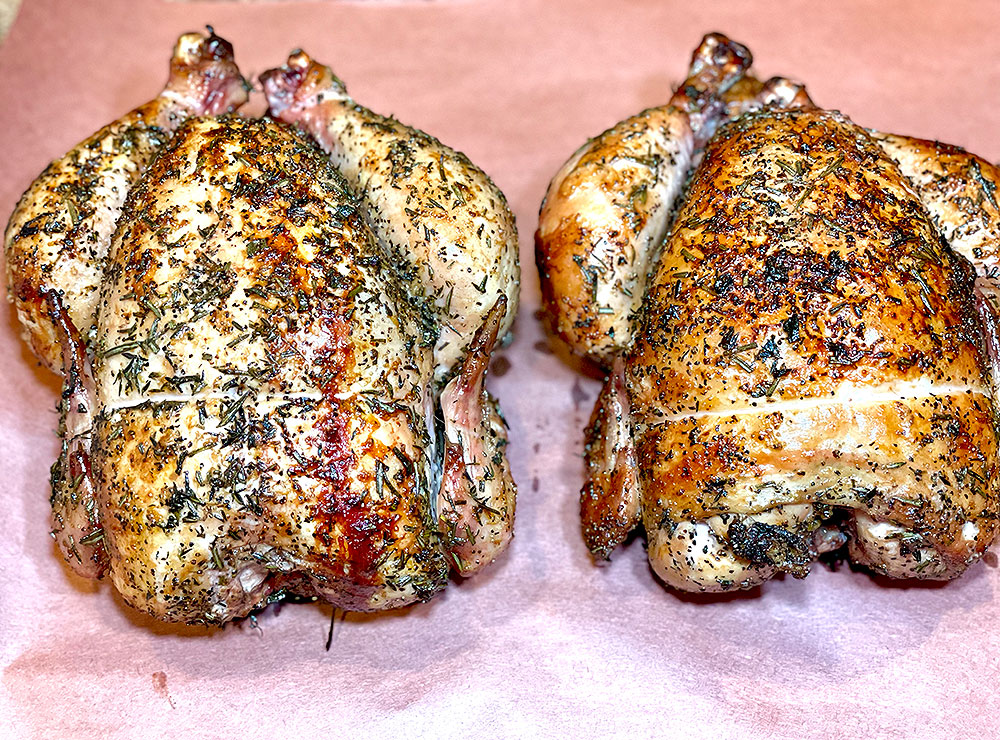 I felt the appearance of each chicken was similar, with a golden-brown color and crispy skin. I think both chickens were juicy when I sliced into the breast and the thigh. The lemon zest in the rub and the lemons in the cavity produced a light and fresh flavor to the chicken. The savory seasoning created a delicious crispy chicken skin. My favorite test for rotisserie chicken is the wings. The wing was crispy, super tasty from the rub, and juicy on the inside. 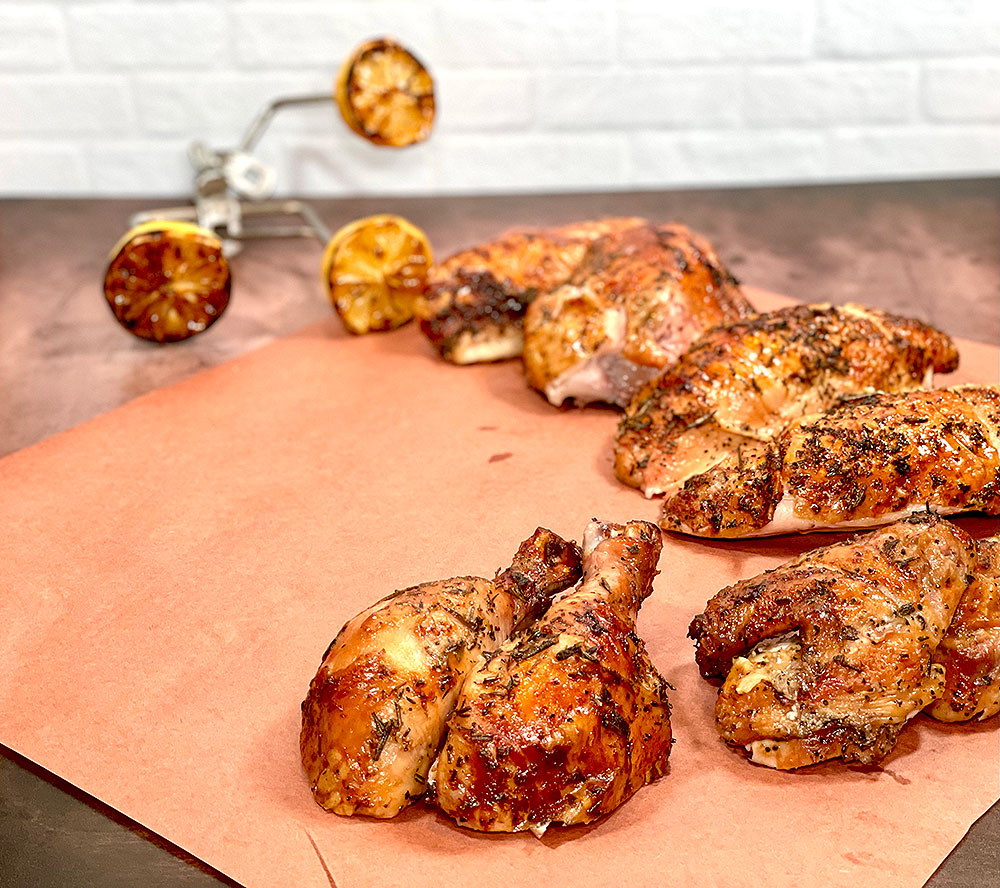 The chicken on the spit top to tail seemed to have a darker color and finish faster, but by the time the second chicken finished, it was golden brown when it finished. I did not feel there was a difference in taste and juiciness between the two chickens. I think the difference in cooking time was more likely due to the wind rather than the spit position since one of the grills burned charcoal faster.

I wish there were a big reveal after running my tests. Instead, I was staring at two delicious chickens that were equally crispy, juicy, tender, and full of flavor.

My one tip, after cooking on such a windy day, is that you should be ready to adjust cooking times and the amount of fuel used since mother nature can make live-fire cooking an adventure.

My final challenge was what to do with all the leftover chicken. I diced up the leftovers and made a chicken pot pie that I smoke-roasted on one of my grills. You might see how I put it all together in a future blog. I would like to thank the Weber Company for contributing a second rotisserie so I could test the chickens in a side-by-side comparison.