Outrageous Brined, Smoked Pork Chops on the Portable Grill and Smoker from Nomad 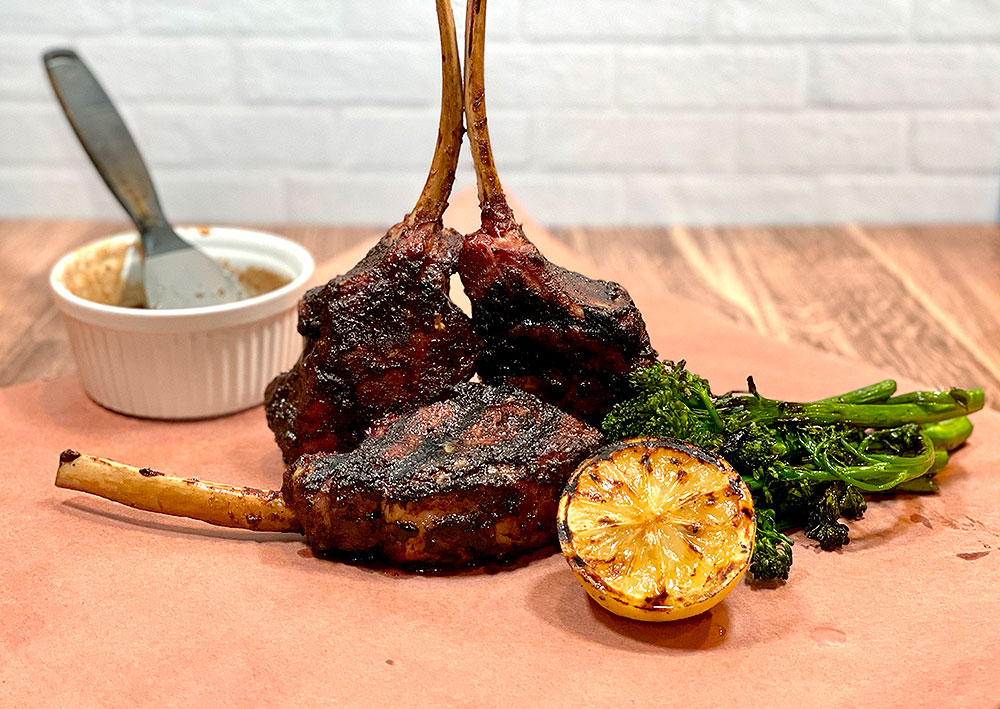 Share
Tweet
Pin
34 Shares
March 8, 2022
One of the best parts of my job is getting to test drive new grills. The taping of Project Fire Season Four gave me occasion to fire up a high tech new portable grill: the Nomad. We used it to grill Catalan shrimp kebabs, cevapcici (Balkan sausages), and a Project Fire mystery box, and despite its compact dimensions, it’s as versatile as a full sizer. We asked Barbecuebible.com fire wrangler Steve Nestor to put it though its paces. Yes, there will be brined, smoked double thick pork chops.

The portable grills I have encountered over the years are either too heavy and difficult to transport, or they were poorly built and fell apart after a few cooks. As its name implies, the Nomad Grill and Smoker was designed for portability.

The well-packaged Nomad recently arrived on my front steps. It was accompanied by a smaller box with Nomad’s natural charcoal and tumbleweed fire starters. Once I had the grill out of the easy-to-open box, I noticed the cool sky blue trim on the grill. The grill is smart-looking and sleek, as if it’s right out of a James Bond or Mission Impossible movie. Definitely cool. 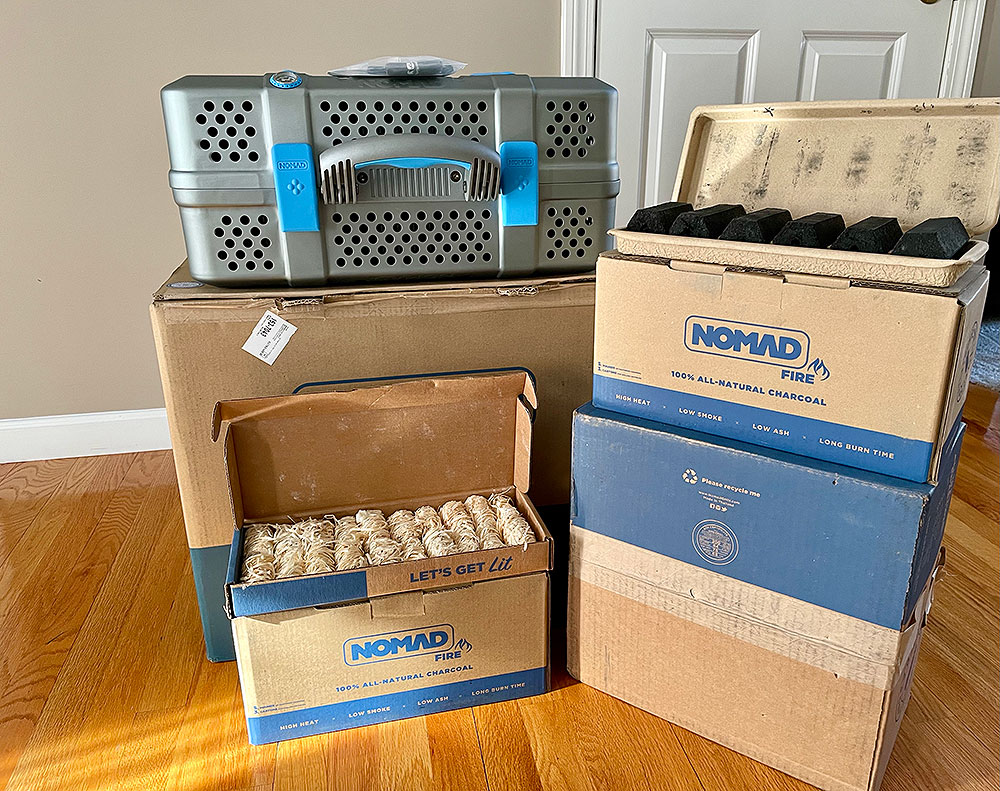 The grill, about the size of a carry-on suitcase, is lightweight, but is solidly constructed of anodized aluminum with an ergonomically-designed handle. As sold, the unit weighs 28 pounds and features 212 square inches of cooking space, enough to do one or two racks of baby back ribs or a dozen burgers. With an optional second grate (sold separately), the cooking space can be expanded to 425 square inches with an increase in weight of just three pounds. The two latches on the front keep the grill firmly closed for transport. 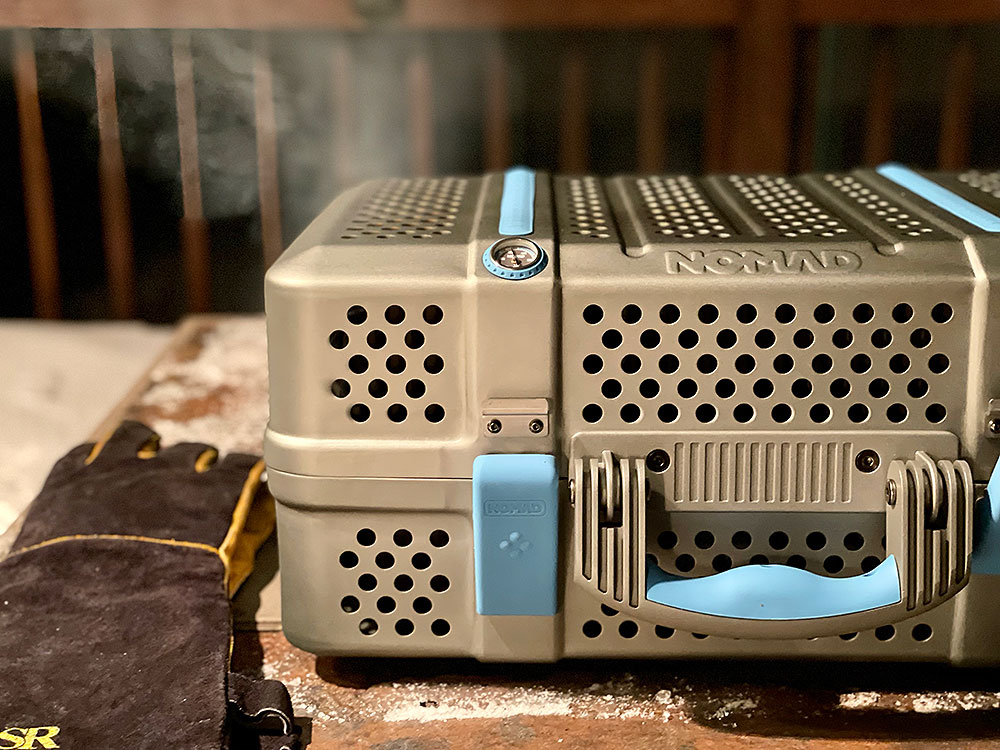 My goal was to evaluate the Nomad’s ability to smoke and direct grill, and see how quickly I could set it up and break it down. I opted to do reverse-sear double-thick pork chops. 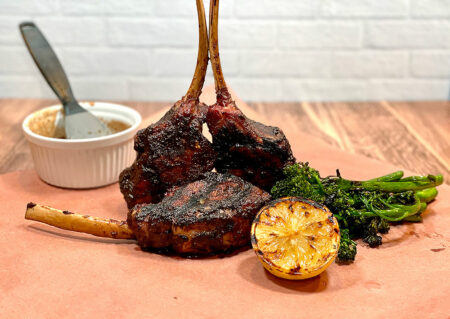 Putting the Portable Nomad Grill and Smoker to the Test

I brined two double-thick pork chops overnight. I rinsed the pork chops and let them air dry in the refrigerator for a few hours. I then seasoned the chops with a spice rub. A big thank you to Holy Grail Provisions for providing a Mangalitsa Pork 8-Bone Rib Roast for this test. (If you are interested they have a 20% discount if you use the code BARBECUEBIBLE.) 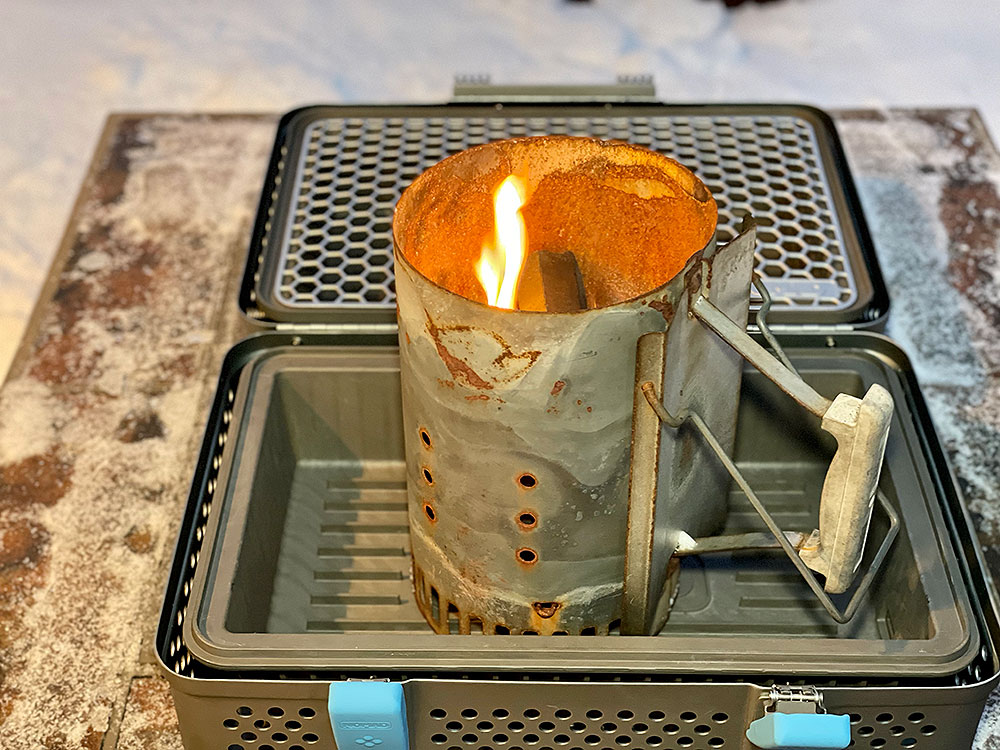 I used a remote thermometer to track the temperature of the grill while it heated up. There is a Tel-Tru T-State bimetal thermometer built into the lid of the Nomad, but I could not see its display from inside the house. (It was only 20 degrees outside when I started the cook!)

The chops smoked for about an hour, reaching an internal temperature of 145 degrees. I then rested the chops for about 10 minutes. Meanwhile, I added more lit charcoal to the grill and set-up a two-zone fire for direct grilling. Note: The charcoal should be placed perpendicular to the fins (ridges) in the grill for optimal convective-like airflow. 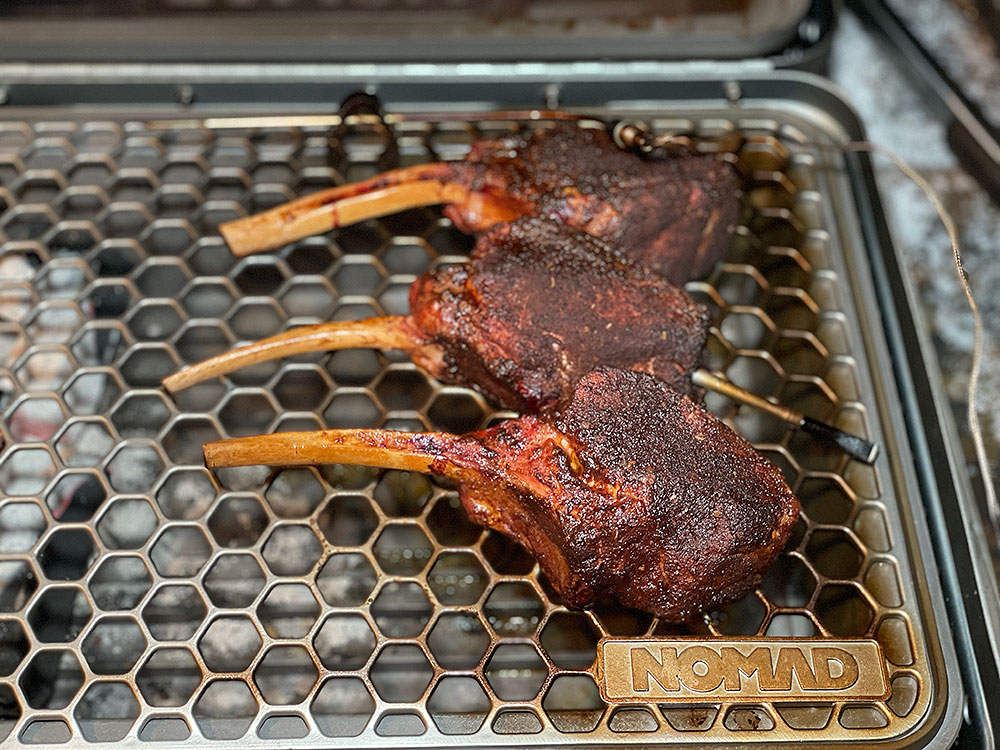 I grilled the pork chops for three minutes, then flipped the chops and repeated the process on the opposite side. Total cooking time was about seven minutes since I also seared the sides of the pork chops. I basted the pork chops at the end with Steven Raichlen’s Cherry Lambic Barbecue Sauce to keep with the cherry theme. I also grilled broccolini to go with the pork chops. 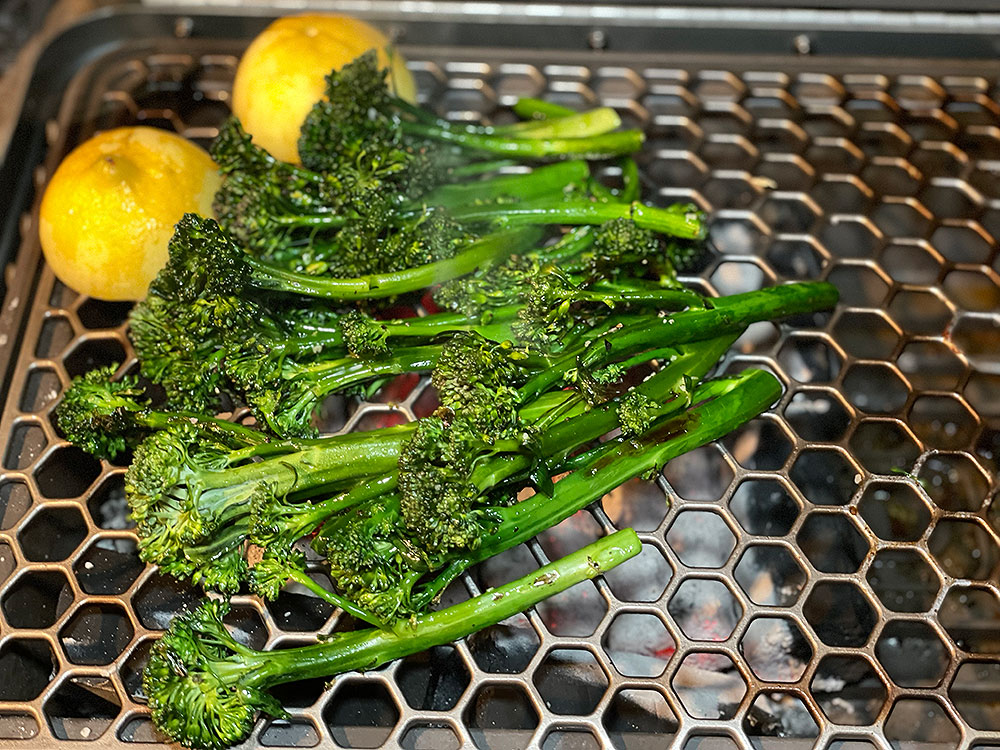 The Nomad grill grate magnetically attaches to the grill to keep it in place during transport or cooking. The grate can also be used as grill basket for veggies by flipping it over. The hexagon design of the cast stainless steel grate looks cool and adds to the grate’s strength.

When I finished cooking, I latched the grill closed and shut both vents to extinguish the fire. The grill was cool after twenty minutes. The next day I noticed most of the charcoal could be used a second time. The long burn time of the Nomad charcoal makes it ideal for low and slow cooking. To clean the grill, I removed the leftover charcoal to use with my next cook, scraped the grate on both sides, and then disposed of the spent ash. The Nomad cools off quickly and is easy to clean which makes it ideal for tailgating, camping, or anytime you need a grill on the go. The grill can be moved by one person. The set-up and break-down of the Nomad grill was quick and easy. 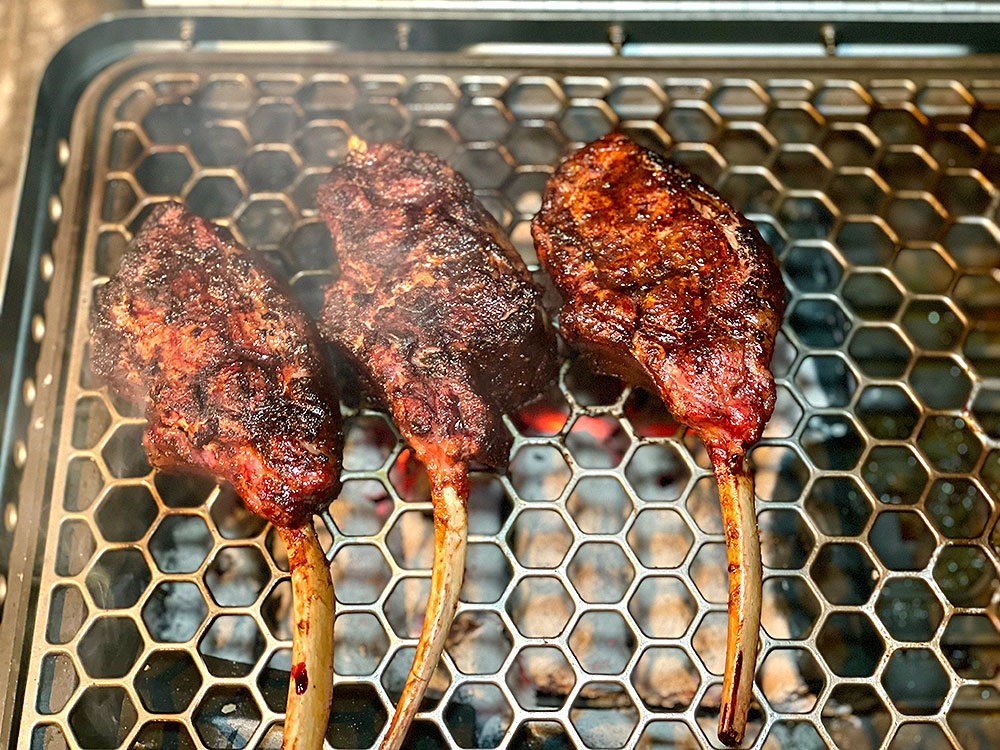 If necessary, the inside of the grill can be cleaned with warm water and mild soap. Nomad recommends that you avoid using harsh chemicals as they can damage the anodized finish. All components should be dry before storing to prevent oxidation.

Due to the construction of the outer shell, the Nomad can be placed on a variety of surfaces. I put mine on a metal and ceramic table on my deck and there were no burn marks or color changes on the table. I can picture the Nomad set-up on a picnic table.

I can imagine burgers, steaks, kebabs, veggies, chicken parts, or shrimp being grilled on the Nomad when set-up for direct grilling. I think the Nomad could also work for smoking fish, reverse-searing pork chops or steaks, or just to get wood smoke on something you were planning to direct grill. I am looking forward to experimenting with it.

It seems the Nomad is the perfect grill to take on outdoor excursions since it is easy to set-up and start cooking. The grill can be carried by one person. The ability to smoke and direct grill expands the cooking possibilities for a portable grill. Clean-up is effortless.

If I lived a nomadic life, the Nomad would join me on my adventures. The grill retails for $599; an additional grill grate, which more than doubles the cooking space, retails for $128. 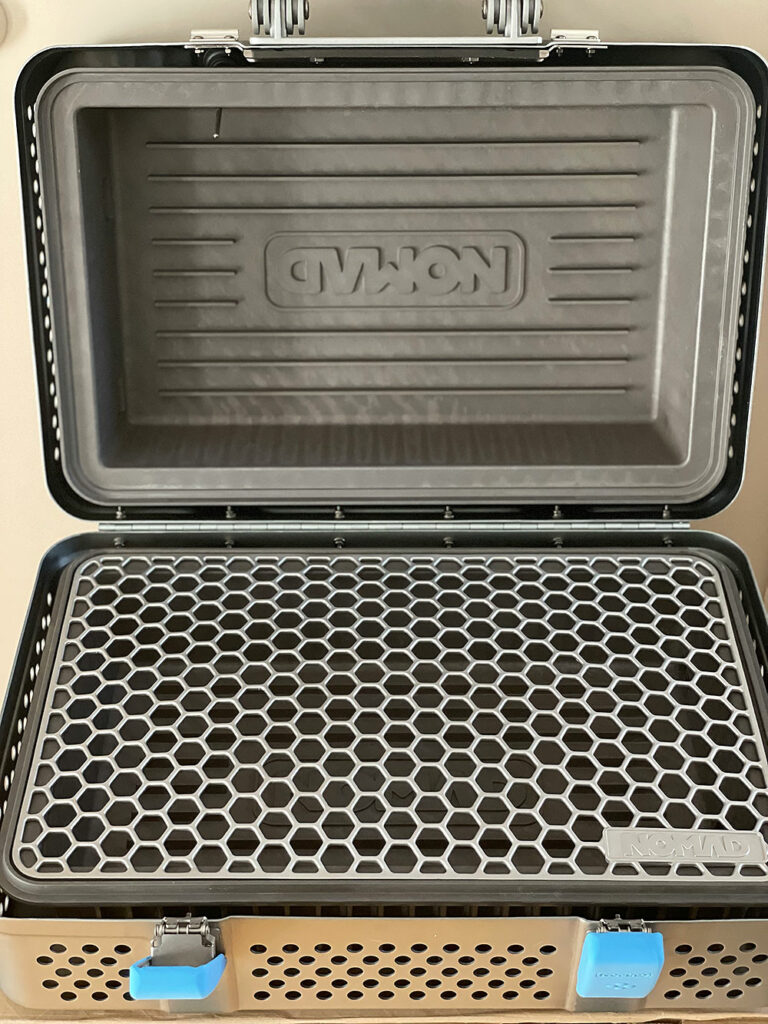