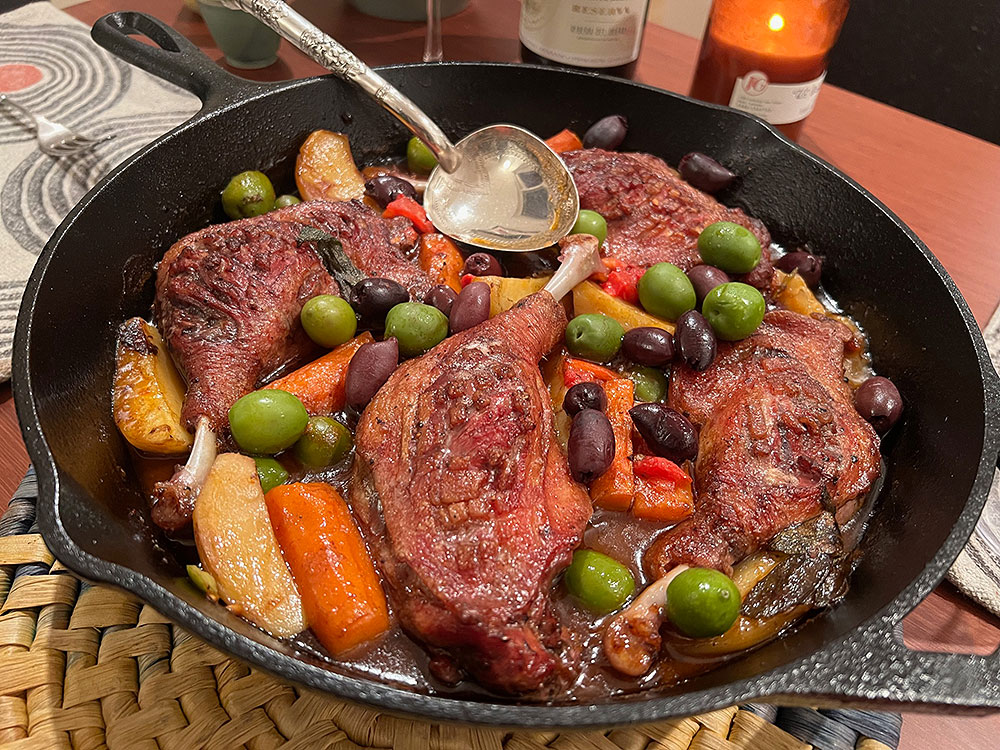 The best duck I ever tasted was the pan-roasted magret (breast) with prunes and Armagnac, prepared by legendary chef André Daguin at the Hôtel de France in Auch in the southwest of France.

If the chef’s name sounds familiar, you may be thinking of his daughter, Ariane Daguin, founder of the premium American meat purveyor D’Artagnan.

And if that name sounds familiar, you’re probably a fan of the swashbuckling novel by Alexander Dumas, The Three Musketeers. (D’Artagnan was actually the fourth musketeer—read the book to find out why.)

All of which is a lengthy prologue to a dish I grilled recently using Rohan duck legs from D’Artagnan (the meat company, not the musketeer). 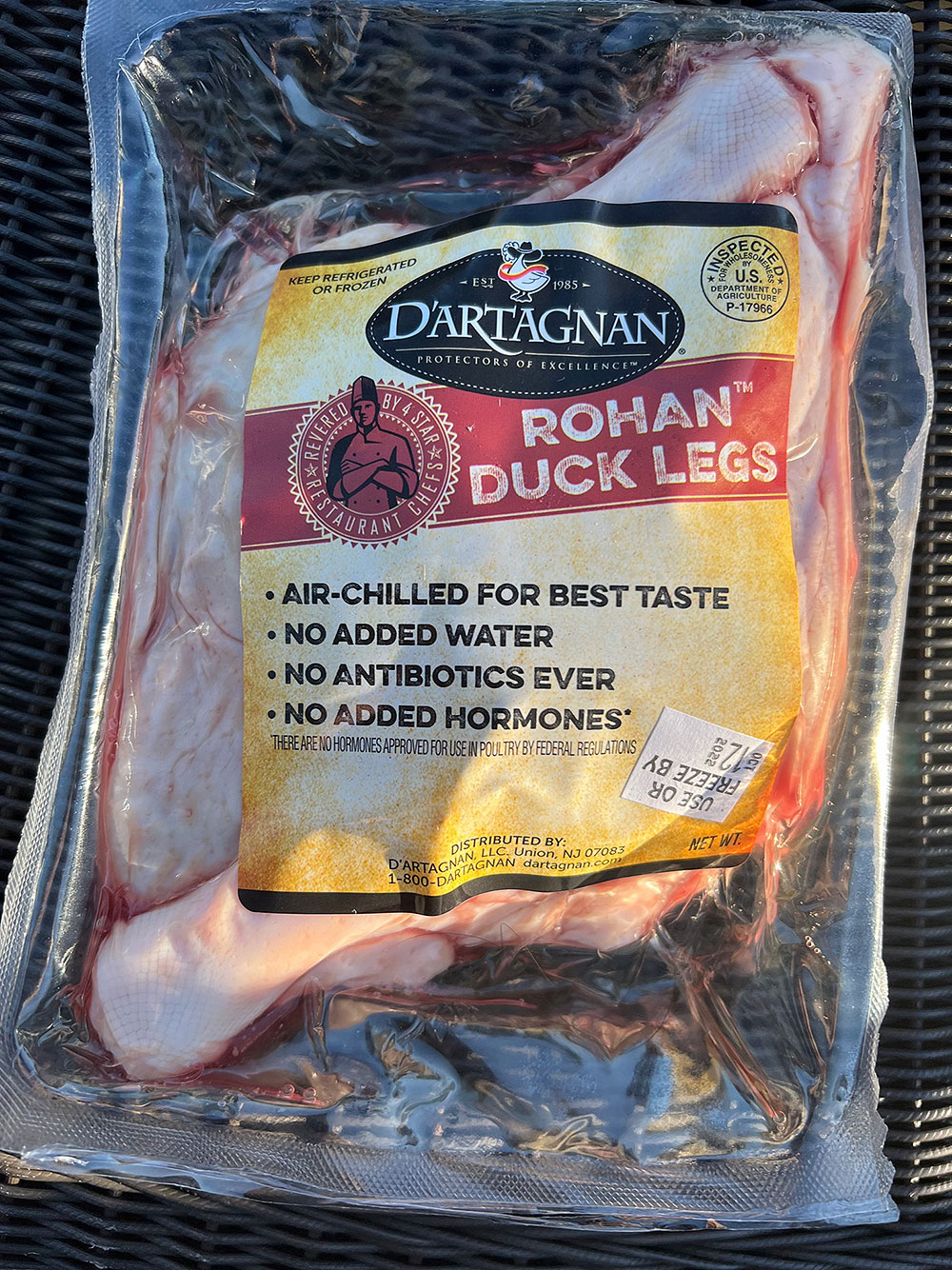 Chef Daguin paired his duck with prunes. I opted for black and green olives—another classic French combination that counterpoints the briny tang of olives with the rich gamy flavor of duck.

The duck in question is Rohan—a variety with dark meat and a richer flavor than the commonplace American Pekin duck. If steers had wings and webbed feet, their meat would taste like Rohan duck.

I started with duck legs—more economical than breasts—using a technique I developed in my book Project Smoke called smoke-braising.

Braising is a wet cooking method wherein you roast meat with a liquid such as stock in a sealed container, like a Dutch oven. (The term comes from braises, the French word for embers, which, traditionally, were placed under and over the pot. Braising is particularly well suited to tougher cuts of meat: the moist heat helps break down and tenderize the meat fibers.)

The twist here is to braise in an open pot on the grill so you can flavor the meat with—you guessed it: wood smoke.

Think of smoke-braising as the best of indoor cooking and barbecue. As with the former, you produce exceptionally moist, tender meat. As with the latter, you get the soulful barbecue flavor of wood smoke. If cooking were mathematics, tenderness plus moistness plus wood smoke would make the perfect equation.

I’d like to call your attention to a couple of special techniques in the following recipe.

The first is scoring the duck skin to help release the considerable fat. (This fat helps keep the ducks insulated and warm during their lifetime.) It also looks cool, and you should never under-estimate the importance of looking cool when grilling. 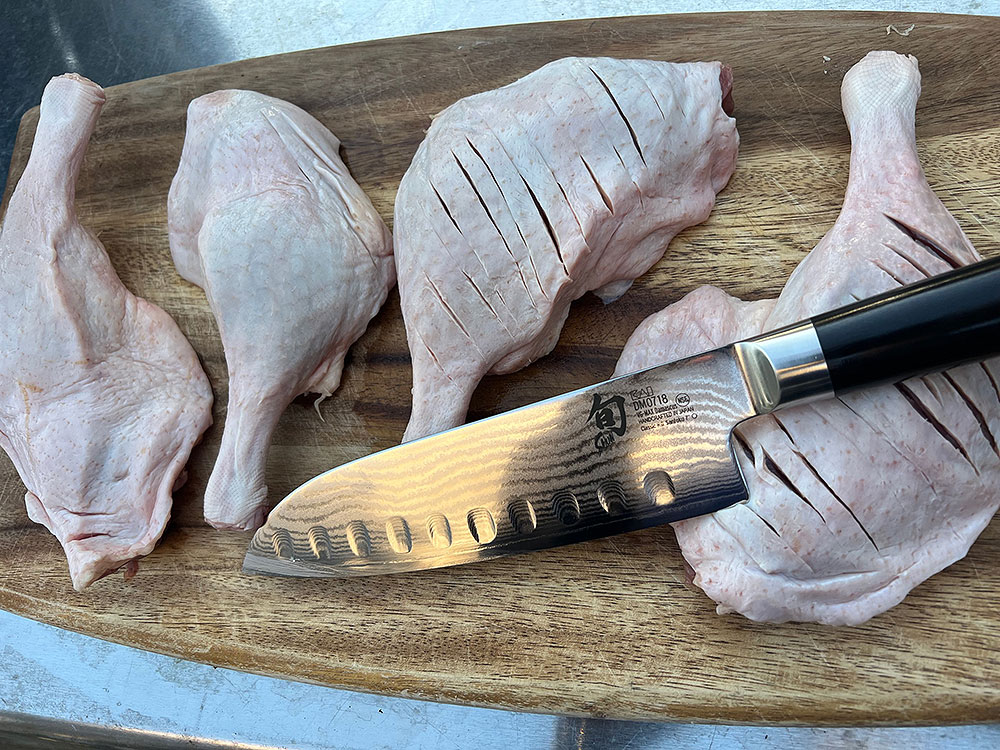 The second is searing the duck. This crisps the skin and helps render the fat. Remember to collect the excess fat. It’s great for cooking potatoes or spreading on grilled bread. (It can be frozen for use at a later date.) 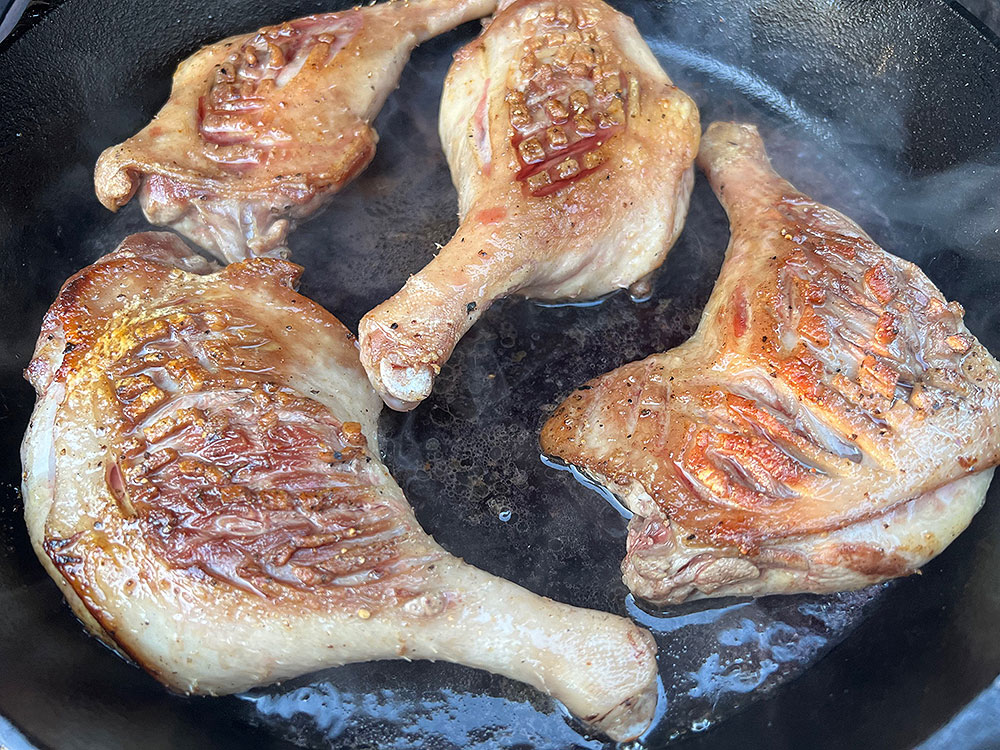 The third is maintaining the proper liquid level of liquid. It should come halfway up the duck legs. Add stock as necessary. But not too much: the top of the meat should be exposed to the smoke. 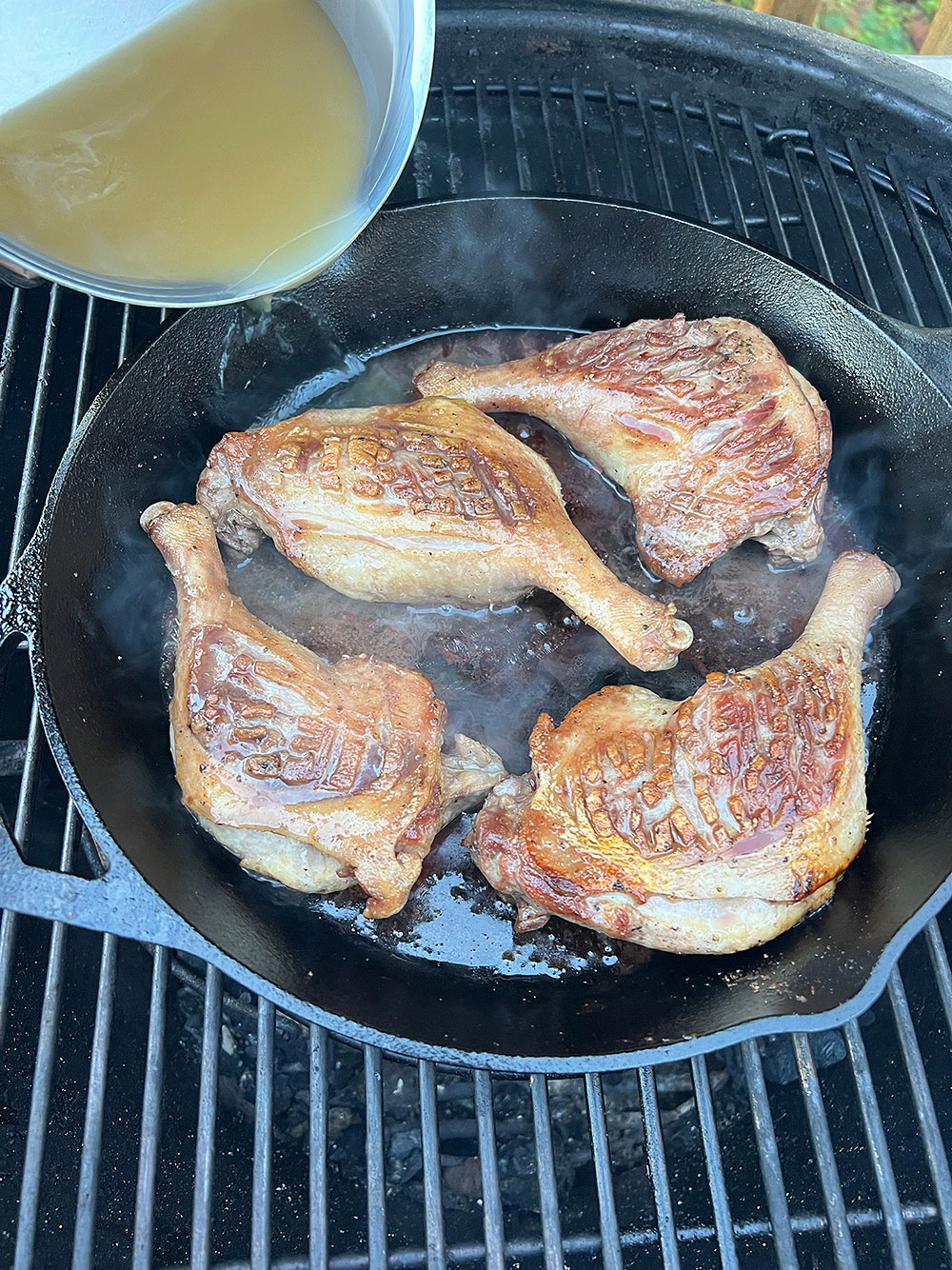 Finally, add the vegetables in the order of their cooking time. The carrots and potatoes take longer to cook than the tomatoes and olives. Ideally, all will be cooked perfectly when you serve the duck. 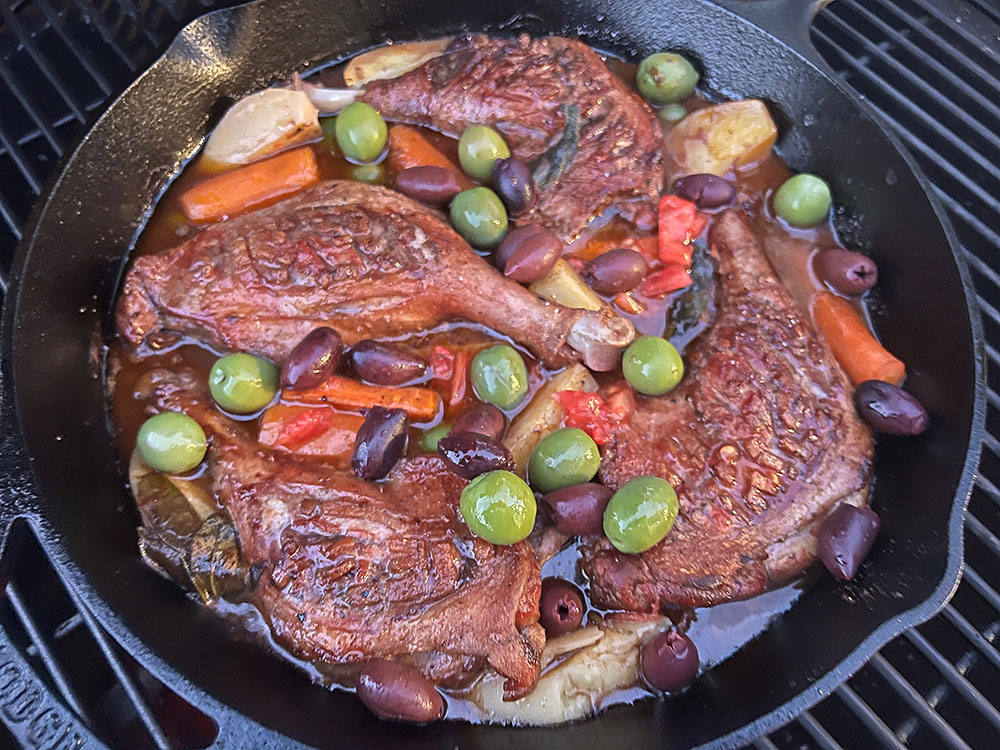 Thanksgiving is coming fast, and this year turkey prices are skyrocketing. That is when you can even find turkey—the news is full of reports of turkey shortages. Duck legs make a great, rich-tasting alternative. I’m sure D’Artagnan (the musketeer) would agree! 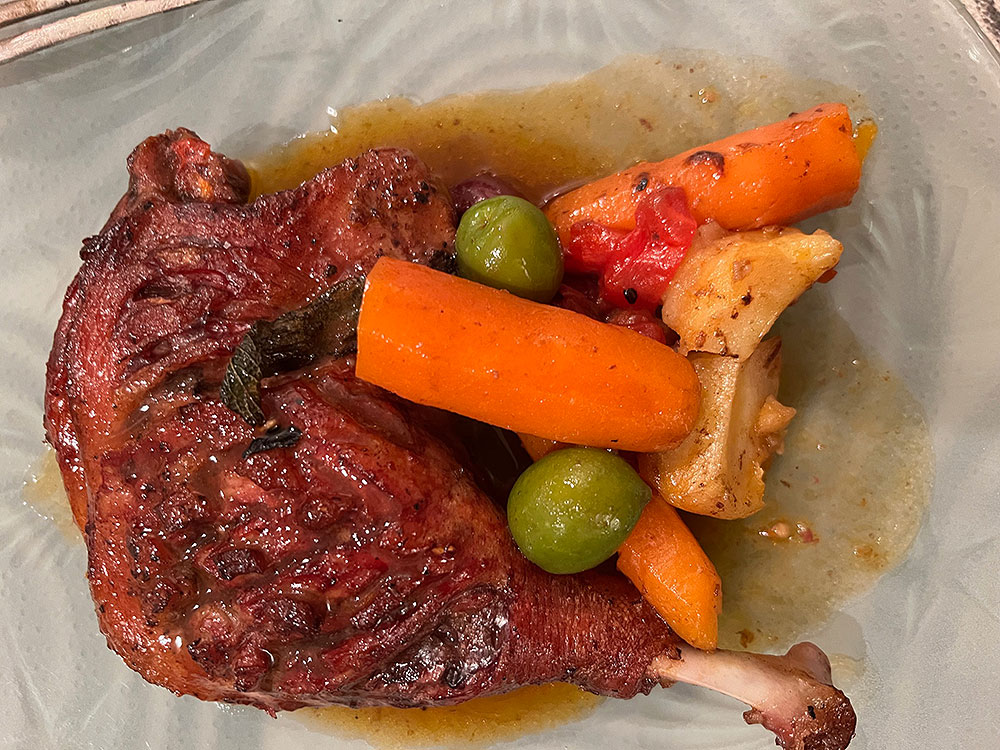