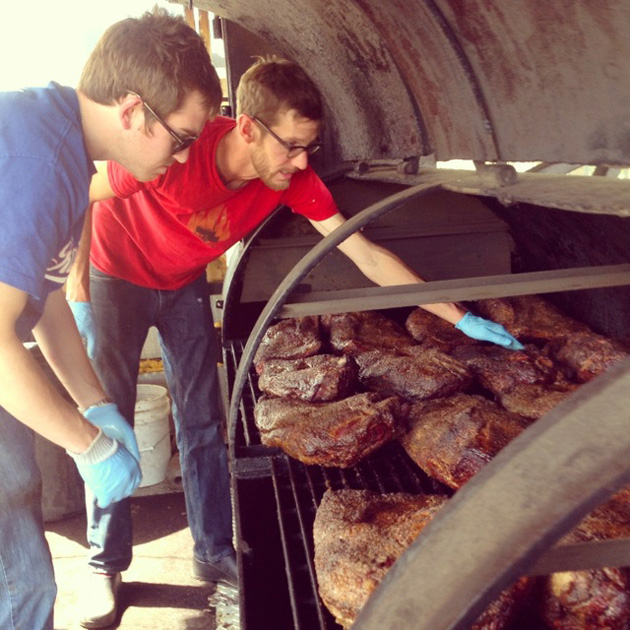 Move over Texas Hill Country. Austin has become the new epicenter of the Lone Star State’s brisket wars, with a thrilling new wave of barbecue restaurants. (New ones seem to open each month.) The latest to enter the fray: La Barbecue Cuisine Texicana.

Well, “restaurant” may be overstating it. Pit master John Lewis (in red shirt) set up his custom designed smoker (originally a 1000 gallon propane tank) in a trailer on a lot in Austin’s Southside. Customers wait in line for the hour or so it takes to be served and dine in an open air tent. But Lewis certainly knows his barbecue, thanks in part to a three year stint at Austin’s legendary Franklin’s BBQ.

Not surprisingly, brisket is the house specialty. Lewis starts with packer briskets (30 a day)–12 to 15 pounds of untrimmed meat and fat–which he seasons with a mustard-pickle juice wet rub and salt-pepper-Lawrey’s-garlic powder dry rub, and smokes over post oak for upwards of 14 hours. One technique that was new for me: he actually increases the heat during the cooking (from 275 to 325 degrees). “The extra heat gives you a nice crisp thin “bark” (crust),” Lewis says.

The resulting briskets are diabolically smoky, supernaturally juicy, and tender enough to cut with the side of a fork. And check out the handsome bark and well-defined smoke ring.