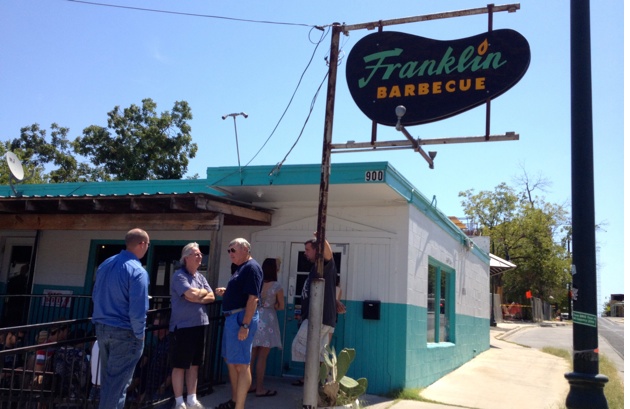 If you want to experience the best brisket in Austin and possibly all of Texas, eat at Franklin BBQ.

It won’t be easy.

You’ll line up at 8:30 in the morning outside a turquoise cinderblock building on a nondescript street corner. If you come in summertime, you may endure triple digit heat. Regardless of the time of the year, you’ll stand in line with 400 other barbecue addicts (doesn’t anyone in Austin work?) for 2 1/2 hours until the restaurant opens at 11 a.m. And if you arrive much later than that, you risk encountering the dreaded sign: “Sold out.”

Once at the counter inside, you’ll watch a server unwrap a grease-stained butcher paper package the size of a Manhattan phone book (remember those?), extract a glistening black slab of meat, and carve it into 1/4-inch thick slices, which he’ll serve on more butcher paper with a sliced loaf that looks suspiciously like Wonder Bread.

On closer examination, just below the “bark” (crusty exterior), you’ll see a reddish pink band perhaps 1/4 inch wide — the smoke ring. Press the meat with a fork and it will squirt fragrant beef juices and brisket fat. Take a bite and you’ll taste a synesthetic symphony of beef, salt, spice and wood smoke. You won’t even notice that you’ve devoured it in less than a tenth the time you stood in line waiting. You’ll experience such an intense rush of pleasure, you may well line up again tomorrow. By now the story of how Aaron and Stacy Franklin got their start has acquired the aura of legend. Aaron grew up in Bryan, Texas, where his father ran a restaurant, Ben’s Bar-Be-Que. (The young Franklin spent most of his time chopping onions and lemons for the barbecue sauce, he says, but learned virtually nothing about cooking meat.) He also did a stint at the legendary Louie Mueller Barbecue in Taylor, Texas, but there he worked as a cashier. Eventually, Aaron moved to Austin, where he spent several years “playing music (he’s a drummer), swinging a hammer to pay the rent, and drinking beer.”

One day, a friend who owned an abandoned Texaco gas station urged Franklin to open a barbecue joint. The 31-year old bought a turquoise blue Aristocrat trailer to use as a kitchen and built a pit from an old propane tank. “The goal was simple: to make really good barbecue,” he says. His wife, Stacy, kept her day job to pay the bills. “When we opened for business, we had 28 cents in the bank.”

Word of Franklin’s barbecue spread like Texas brushfire, and so did the waiting lines. A year later, the couple signed a lease on its current digs, a defunct barbecue joint on 11th St. Bon Appetit magazine pronounced Franklin’s the best barbecue restaurant in the U.S. and he even inspired a story in the New Yorker. To come to Franklin’s solely for brisket would be to miss spare ribs of uncommon succulence, smoked turkey that’s as rich as ham, beef sausage so juicy, it oozes when you cut into it, monster beef ribs (smoked for 8 hours and available only on Saturday), and pulled pork shoulder that could pass for authentic in North Carolina.

Sides (coleslaw, potato salad, pinto beans) cover no new territory, but they’re homemade and tasty. A local baker, Melissa Brinkman of the Cake and Spoon bakery bakes the buttermilk lemon pie and bourbon banana pudding with vanilla wafer crust served by way of dessert. “We only serve Texas beer,” Franklin says — a selection that includes locally brewed Live Oak, Hops and Grain, and a porter made with malt that Franklin smokes in his pit.

Franklin BBQ is open Tuesday through Saturday, from 11 a.m. until they sell out.