Winging It on Super Bowl Sunday 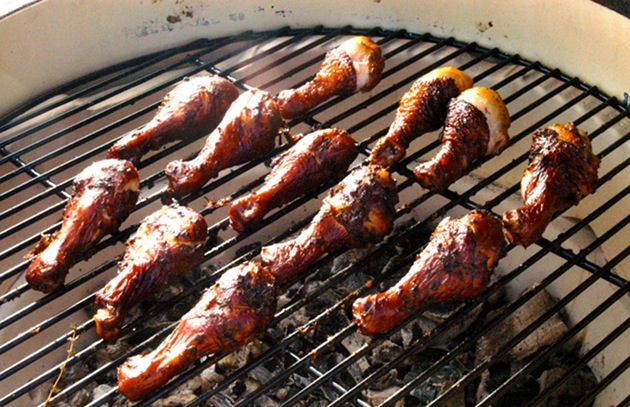 Actually, it’s Super Bowl Sunday, which is coming at us faster (February 2) than a Peyton Manning pass.

According to the National Restaurant Association, 63 percent of Americans consider chicken wings a “must-have” in their annual mash-up of food and football. We ate nearly 1.23 billion wings during last year’s game—enough to encircle the earth twice.

Chicken wings make the perfect Super Bowl food. Infinitely customizable. Easily held in one hand. Spicy enough to take the chill off a winter’s day. Primal as well as beer-compatible. Relatively inexpensive, even for a crowd.

Best of all, the supply is up and prices are down—not like the dire chicken wing shortage of 2013.

Grill masters around Planet Barbecue back me up on this.

There are some Americans who will rely on take-out or delivery for their Super Bowl Sunday wing fix this year. As a reader of this column, you won’t be one of them. Forget about deep-frying. Wings seared over live-fire, blasted with spice and wood smoke, and served hot off the grill will score major points at your party.

So what does it take to ace chicken wings on the grill? Here are some tips to help you up your game.

Here are the best wing recipes to get you started:

Now that you have wings covered for the big day, come back next week to get more ideas for Super Bowl dips to add to the menu.