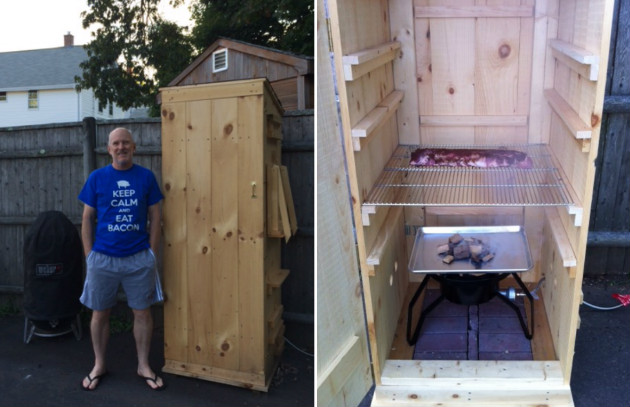 It gives me especially great pleasure to introduce this week’s guest blogger. His name is Paul Kuconis and he’s a recent graduate of Barbecue University™. And I like to think his time at the Broadmoor inspired him to delve deeper into the arts of smoking and grilling. So deep that he built his own smoker. I asked Paul to share his home-made smoker with our barbecue community.

Just think what Barbecue University™ could do for your passion.

I own three Weber grills: a Genesis gas grill, an 18.5-inch kettle grill, and an 18.5-inch Weber Smokey Mountain grill. I grill and smoke year round in the Boston area, where…well…winters can get pretty cold!

A coworker (and fellow smoker) showed me an article with how-to plans for building a wood smokehouse. This looks interesting and very doable, I said to myself. After digesting the plans, I decided to tweak them for my specifications. I built the three sides in my cellar, and the following weekend, brought everything outside and built the base and roof and assembled the sides. As I set the smokehouse up on my driveway, I decided to line the floor with bricks to stabilize the structure.

With this much done, I now began building and fitting the door. For a guy who usually builds kitchen cutting boards, this was a slight challenge, but I got it done!

I drilled two 1-3/4 inch vent holes (that was the largest Forstner drill bit I had) in each side—one toward the top and one toward the bottom—and fashioned a sliding cover for each vent for air regulation. I also drilled an opening with a sliding door to allow the gas line to be pulled inside when not in use.

I bought four grill grates (each 12 inches by 24 inches) and a Bayou Classic propane burner (the model you use to deep fry a turkey) from Amazon.com, as well as a propane tank at my local gas station. Here’s the finished product! A man and his smokers. Life is good! And a motto to live by!

OK, now it’s finished—time to try it out. I bought a rack of pork ribs and applied a rub (nothing special—just store-bought). I soaked some mesquite wood chunks in water and set the smoker up. I decided to use a baking sheet to hold the wood for two reasons: 1) I didn’t want to use my cast iron skillet, and 2) the baking sheet was large enough to catch most of the drippings, keeping the propane burner and bricks reasonably clean. Ready to go! I set the pin valve to attain a temperature of 250 F and could see the smoke starting to rise. (I should mention I also drilled two holes in the door, one high and one low, to be able to insert a grill thermometer to monitor the temperature.) It was tricky, but I got the temperature to 250 on the button. A nice amount of smoke was generated, which worked its way up the structure and out the upper vent holes. (I love the smell of smoke, especially when a rack of ribs is waiting at the finish line.)

After about three hours I checked the ribs. To determine if they were done, I used a couple of tricks I learned at BBQ U: The meat had receded from the ends of the bones, and the rack flexed in the middle when I held one end firmly with tongs. The ribs were very tasty!

All in all, the project was enjoyable. I estimate the smoker cost me about $500. Not too bad. I will get years of enjoyment and awesome food from it.

CHECK OUT THESE OTHER AWESOME DIY PROJECTS: