Spit-Roasting Stands on Its Head 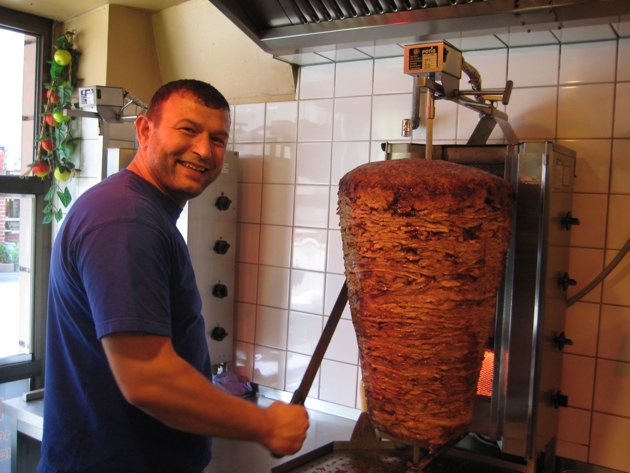 All are variations on a theme of spit-roasting—more precisely, on a rotisserie turned on its head.

Gyro (as in our term “gyroscope”) refers to a popular Greek “fast” food: thin slices of spiced lamb (or lamb meatloaf) packed onto a spit and roasted on a vertical rotisserie to be thinly shaved by hand (a hand wielding a very large sharp knife) and piled onto a pita bread with yogurt and vegetables.

The Turks call the preparation doner, adding their own unique Turkish seasonings and condiments.

Shawarma is the Middle Eastern version—made with lamb, or often with chicken or turkey. The spicing ranges from the familiar onions and garlic to Middle Eastern za’atar (wild thyme blend) and lemony sumac. Here, too, a stunning selection of fresh and pickled vegetables accompanies the meat, plus yogurt and tahini (sesame sauce). So what’s the big deal about cooking meat on a rotisserie stood on its head? Actually, there are several advantages to this singular method.

You can pack a lot of meat on a single vertical skewer. That means that one roasting session can serve dozens—even hundreds—of people.

Thanks to the upright position, as the lamb or turkey fat melts, the juices baste the layers of meat below it, keeping every serving moist and rich-tasting.

The meat cooks and is carved from the outside in, so everyone one gets a crusty end cut. (And in effect, everyone gets meat that is spit-roasted to order.) If you like the end cut of a prime rib as much as I do, you’ll understand why this is so important.

Alas, not all gyros, doner, and shawarma are created equal. When I’m grill-hopping in Greece or the Middle or Near East, I look for stands that do their vertical roasting the old-fashioned way: on a rotisserie fired by charcoal. It’s an ingenious set-up: There is a stack of metal or ceramic cubbyholes arranged like a ladder behind the spit. The grill master shovels a pile of burning embers on each shelf, so the roasting is done by charcoal. The meat tastes a little crustier and smokier than doner cooked on the ubiquitous electric rotisseries. I’d like to think you could tell them apart blindfolded.

So how do you duplicate the gyro experience at home? Well, big spenders can invest in a commercial vertical rotisserie.

Curiously, I haven’t had particularly compelling results on a conventional Western horizontal rotisserie. For starters, the juices drip off the turning meat instead of running down it to baste it. (You can compensate by spooning the fat in the drip pan back over the roast. But the problem is that as you carve the gyro, the roast gets further and further away from the heat, resulting in less browning and crisping as you approach the center. (Commercial gyro machines have an adjustable spit or burner, so you can move the meat closer to the heat as you carve it off the spit.)

My solution is to direct grill the thin slices of spiced lamb or turkey over a hot fire, then stack them up and carve them. Direct grilling delivers the crust, smoke, and char flavors of the best shawarma or doner, while stacking and slicing gives you thin crusty slivers characteristic of freshly sliced vertically roasted meats.

Have YOU ever tried to cook gyro, doner, or shawarma on your grill? What tactic did YOU use? Please post details and photos on the Barbecue Board.

Sign up for Workman’s Blue Plate Special to get a FREE Steven Raichlen eCookbook and discounts on three of Steven’s eBooks!