The Philosopher of Barbecue: Michael Pollan & His New Book Cooked 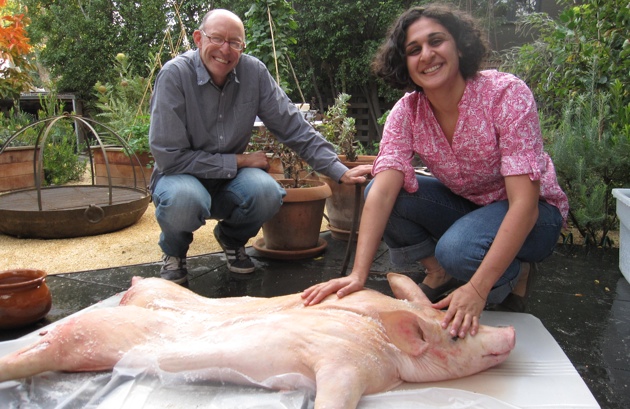 Every once in a while, you encounter a book that gives you a radical new perspective on a familiar subject. Case in point: Michael Pollan’s brilliant new Cooked: A Story of Transformation (Penguin Press)—especially the first 121 pages, which are devoted to a topic near and dear to this community’s hearts: barbecue.

Spoiler alert: This is not a cookbook (although it does conclude with four iconic recipes). It’s a profound meditation on what cooking means—technologically, biologically, sociologically, even philosophically—and to answer that question Pollan delves into disciplines as diverse as history, chemistry, physics, aesthetics, psychology, anthropology, and religion.

I’m sure you’ve heard of Michael Pollan (pictured, above). He’s the journalist, activist, and author of such New York Times bestsellers as Food Rules and In Defense of Food who took on agri-business and industrial meat processing. (He also wrote a very interesting book on how plants use humans to flourish.) If the words locavore and sustainability are part of your dietary vocabulary; if you feel the Omnivore’s Dilemma every time you push a shopping cart through the supermarket; if you make a concerted effort to shop farmers’ markets and eat grass-fed beef, chances are that Michael Pollan had something to do with it.

Tongue firmly planted in cheek, Pollan begins his personal journey to barbecue enlightenment with a confession of abject ignorance: “As a Northerner, I’d already spent more than half my life as a serial abuser of that peculiar word, which is to say, as a backyard blackener of steaks and chops over too-hot fires—over flames!—with a pitiable dependence on sauce.”

So Pollan enlists the aid of two mentors—legends of North Carolina barbecue. Samuel Jones is the fourth generation owner of the Skylight Inn in Ayden (motto: “If it’s not cooked with wood it’s not Bar-B-Q”). Ed Mitchell runs the Pit in Raleigh (motto: “There’s something about cooking a whole animal that makes people feel happy … only two things in my experience have had the power to transcend race: Vietnam and barbecue.”). Pollan even puts his own skin in the game, volunteering as an assistant pit master at in Big Apple Barbecue in Madison Square in New York City.

In the course of his education, Pollan (an accomplished cook already to judge from a meal I had at his home in Berkeley, California, a few years ago) learns how to:

Pollan’s epoch journey takes you from primeval Africa (where a distant human ancestor called Homo erectus first learned to harness fire to cook food) to animal sacrifice in the biblical Holy Land; from the fire myths of the Homeric Greeks to the Taino Indian barbacoa of the Caribbean; from the stomach-turning CAFOs (“Concentrated Animal Feeding Operations—industrial feed lots of the South) to the visionary modernist grilling of Bittor Arguinzoniz, the autodidact chef owner of the Michelin-starred Extebarri in Spain’s Basque Country.

Pollan is equally at home quoting Freud (and his cockamamie theory on the male urge to micturate on fire) as he is swinging a meat cleaver. French structural anthropologist Claude Levi-Strauss weighs in on the symbolic significance of the raw and the cooked; the twentieth century French doctor, Louis-Camille Mallard, describes how heating amino acids with sugar produces the hundreds of new flavor molecules we associate with roasted meat—the so called “Maillard effect” prized by grill masters today.

As for the definition of barbecue, a pit master from Alabama named Sy Erskine sums it up best: “The mystic communion among fire, smoke and meat in the total absence of water.”

Once you’ve mastered the section on “Fire” (Pollan organizes his book by the four elements of the Ancients), you can learn about “Air” (the process whereby flour and yeast become bread—essential in making buns for a barbecue sandwich) and “Earth” (the technique of fermentation that transforms cabbage into sauerkraut). And in foul weather, you can follow the “Water” section to learn how to braise that pork shoulder in the oven.

This is food writing at its best. Whether you’re a working pit-master or an armchair philosopher, Michael Pollan’s Cooked will make your mouth water—and make you think.