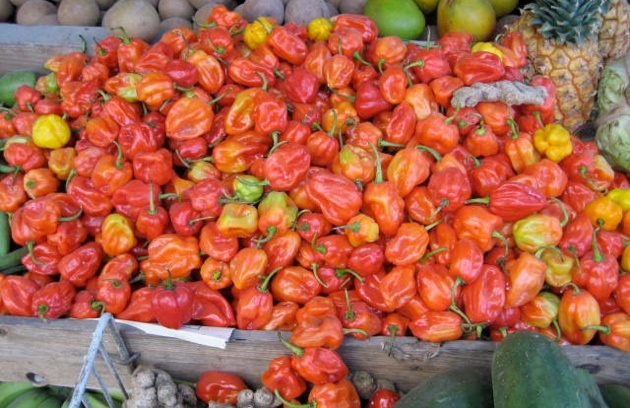 The iconic movie character Forrest Gump (played by Tom Hanks) famously observed life “was like a box of chocolates. You never know what you’re gonna get.” The same is true for any capsicum that’s not the mild-mannered bell pepper. Even a single chile plant can produce fruit of varying potency, from mild to tongue blistering. So eating chiles is akin to Russian roulette.

On YouTube we watched in horror as one culinary thrill-seeker, Jamie Kocher, ate a bhut jolokia, more commonly known as the “ghost pepper.” Toward the end of the video the CEO of the Waimea Bay Chili Pepper Company was curled into the fetal position, begging to be taken to the emergency room. The bhut jolokia is wickedly potent, ranked at more than 1,000,000 Scovilles (the measure of a chile’s heat—named for an early 20th century American pharmacist). (By comparison, a jalapeño rings in at about 3,500 Scoville Heat Units!) But the bhut jolokia was recently displaced as the world’s hottest chile pepper by the Trinidad Moruga Scorpion, 1,500,000 to 2,000,000 SHUs. Whew!

Chiles—spelled “chillis” or “chillies” in Pac-Rim countries—are native to South America and the Caribbean, where they’ve been cultivated for more than 5,000 years. (Most wild chile plants owe their existence to birds, a creature that spreads the seeds but is oblivious to chiles’ heat.) Christopher Columbus takes credit for introducing the chile to Europe back in 1493, though he erroneously associated it with black pepper. (Like potatoes and eggplant, chiles actually belong to the nightshade family.) In less than a century, the chile pepper completely circumnavigated the globe.

Today, many food cultures are defined by this fruit (for botanically speaking, the pepper is a fruit, not a vegetable). Consider Peru’s ají de galina (chicken chile stew). Hungary’s paprikash. And of course North American chili.

Celebrate the almighty chile pepper by making these Bacon-Cheddar Stuffed Jalapeno Poppers and these Jamaican Jerk Chicken Legs. Plus, show off your chile pepper I.Q. at your next cookout with these 15 scorching hot facts and cooking tips:

SHARE YOUR IDEAS FOR HOW TO GRILL WITH CHILE PEPPERS ON THE BARBECUE BOARD!

CHECK OUT THESE PRODUCTS FOR GRILLING CHILE PEPPERS:

TO LEARN MORE ABOUT HOW PEOPLE GRILL CHILES AROUND THE WORLD, CHECK OUT THE BOOK PLANET BARBECUE!