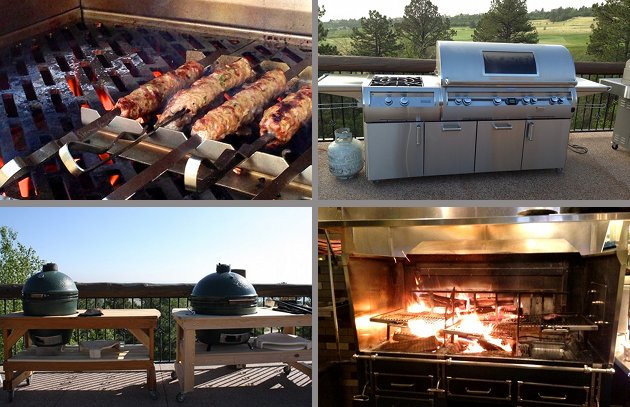 It’s a rough job, as the saying goes, but someone has to do it: Traveling Planet Barbecue on the lookout for amazing new grills, heart-stoppingly delectable dishes, and restaurants worth making a special trip for.

In the next two weeks, I’ll be blogging here on Barbecue! Bible and writing for the Huffington Post about some the most memorable barbecue experiences I had in 2013. So spread the word, and as always, tell us about your best barbecue experiences in the year we’re about to say goodbye to. And now, Raichlen’s Coolest Grills of 2013.

First, let me state clearly, I am a grill geek, not a grill snob. (OK, maybe a little of a grill snob.) True, we have some of the world’s most elaborate grills and smokers at Barbecue UniversityTM, and our inventory is valued in the six figures. But on an average weeknight, I’m as likely to fire up a charcoal kettle grill as I am a stainless steel tri-fuel supergrill. In my travels around Planet Barbecue, I’ve had amazing food served off the most primitive grills imaginable, including a sate grill fashioned with tin snips from a five-gallon cooking oil can in Jakarta, and another improvised from a wheel rim in Hanoi.

So when I say you don’t need to spend a fortune on a grill or smoker to turn out world-class barbecuing and grilling, I speak from firsthand experience.

Nonetheless, the holidays are a time for extravagance, and the arrival of a New Year gives us an occasion to dream. Forget about visions of sugarplums: Here’s my list of the coolest grills and smokers I encountered in 2013.

Lang Smoker: I met Ben Lang at a barbecue festival hosted by StarChefs in Manhattan, where he had hauled a truckload of his industrial-strength smokers from his plant in Nahunta, Georgia, to the Big Apple. Ben developed what is now known as “offset firebox reverse flow technology”—an ingenious thermodynamic design the keeps the temperature even from one end of the firebox to the other. (In conventional offset smokers, that temperature can vary by as much as five degrees from end to end.) Plus, the Lang Smoker looks killer cool! Available in sizes from 36 to 108 inches. Universo Wood-Burning Grill: Check into the Lucia Hotel in downtown Portland, Oregon, and you’ll smell smoke. Fragrant smoke, that is, wafting from the massive Universo wood-burning grill that is the centerpiece of the Imperial restaurant just off the lobby. You’ll leave breakfast, lunch, or dinner smelling subtly but pleasantly like a campfire, just what Chef Vitaly Paley had in mind when he imported this lust-worthy grill from Florence, Italy. Kalamazoo K750HS: This shiny stainless steel behemoth settles the gas versus charcoal versus wood debate once and for all, as it’s capable of burning all three. One of the sexiest grills at Barbecue University&trade;, the three-day crash course I run for live-fire cooking enthusiasts at the Broadmoor in Colorado Springs each year, the Kalamazoo features 75,000 BTUs gas burners, laser-cut steel grill grates, and an industrial-strength chain-driven rotisserie. Schwenkbraten (swinging grill): Unique to Germany’s Saarbrucken region, the schwenkbraten harnesses the mercurial power of live fire. The grill grate hangs from a spindle on a tripod over the firebox. A turbine mechanism captures the rising hot air to rotate the grill, guaranteeing even cooking every time. Laser-cut from burnished stainless steel, precision-welded and elegantly engineered, the swinging grills Klaus Marx’s of Eisenmarx are as much works of art as highly-functional cooking machines. Big Green Egg XL: The Big Green Egg just got bigger thanks to the new BGE XL, featuring a full 452 inches of cooking space. (That’s enough to roast two turkeys). Like all Kamado-style cookers, the BGE has thick ceramic walls and hyper efficient venting to retain and diffuse heat as effectively as its popular predecessors. With a temperature range of 200 to 700 degrees, it can sear steaks with the best of them or slowly smoke ribs or pork butt. Worktable optional. Fire Magic Echelon Diamond Series 1060: The ultimate in high tech gas grilling, with a lid that raises by the push of a button, lights that shine at night (yes, on the burner knobs as well as under the hood), 1000 square inches of cooking space, a heavy duty rotisserie that can handle a small hog, and even a space age glass viewing window so you can watch your feast being cooked. Korin Japanese Barbecue Grill: The fact that I was born in Japan has nothing to do with my fascination with this ceramic tabletop charcoal grill (for outdoor use only). Its rectangular Zen-like design is perfect for yakitori, sate, or other skewered foods. You can even remove the grate and grill, mangal-style, like much of Planet Barbecue’s live-fire cooking cultures. Burn Japanese binchotan charcoal and you’ll feel like you’re dining at an authentic robata yaki parlor in Tokyo. Wittus Firebird Fireplace and Grill: If you’re a minimalist at heart, you’ll appreciate this wood-burning design by award-winning Danish architectural designer Bent Falk. Made of brushed steel, the visually striking unit will oxidize to an oxblood reddish-brown. Raise or lower the stainless steel grill grates for heat control. Sear steaks or warm breads with impeccable style. The Weber Ranch: With 1,104 square inches of cooking space, this behemoth—the biggest grill in Weber’s line of kettle grills—has you covered. (My assistant loans hers to the local fire department for its annual community steak dinner.) Sturdy, useful, macho. Its mere presence in your grill collection says you’re serious. Experience some of these grills and more during Barbecue UniversityTM. Sign up for on of two action-packed sessions scheduled for May 28 to 31 and May 31 to June 3, 2014.