Grilled Dips for the Super Bowl 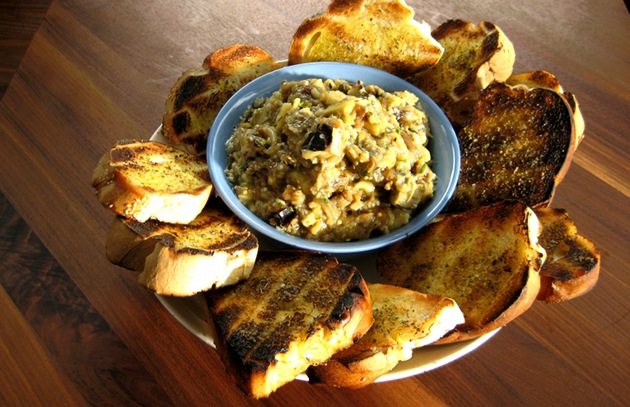 Hunger Game? That would be Super Bowl Sunday. Apparently, it involves football and no shortage of statistics (like carries and passing yards). But the stat that matters most to me is 62 percent. That’s the number of American grill owners who will fire them up on Super Bowl Sunday, making this the busiest grilling day of the winter. (Yes, there’s actually an organization that keeps track of our grill usage. Not the NSA, but the HPBA—Hearth, Patio, and Barbecue Association.) Given the unseasonable, merciless cold weather this winter, that’s no small feat.

Which brings me in a round about way to one of most popular dishes served at Super Bowl Sunday gatherings: dips.

Dips may lack the machismo of grilling a steak or the bragging rights associated with smoking a pork shoulder. And their connection with grilling may not seem apparent at first glance. But no Super Bowl spread would be complete without an array of interesting dips. And you, dude or dudette, are going to take your super dip bowls to the next level. The secret is to ditch the demeaning shortcuts, while retaining the bold flavors we smoke-aholics love. That means no onion soup mix or canned artichokes. But it doesn’t mean no dips.

For me, the best way to make a killer dip is to do what comes naturally to this barbecue community: Fire up the grill. Lots of cultures on the world’s barbecue trail back me up on this. In the Middle East, for example, eggplant charred cinder-black on the grill (or even directly the embers) acquires an intense smoky flavor that’s the hallmark of any world-class baba ghanoush (garlicky eggplant dip).

In Greece, they grill bell peppers a few shades darker than ebony, imparting a haunting smoke flavor while intensifying the capsicum’s natural sweetness. Puree roasted and peeled peppers with chickpeas and salty, tangy feta cheese, and you get a dip that could stop a pita chip dead in its tracks.

Closer to home, onion dip enjoys a popularity in some circles bordering on fetish, but I doubt that anyone in this barbecue community would stoop to mixing dehydrated onion soup mix with sour cream. When we want onion dip, we start with fresh onions, which we slice and grill mahogany brown, basting with butter for all we’re worth, intensifying the onion’s natural sweetness. Mix grill-caramelized onions with sour cream and cream cheese (and why not serve them with homemade potato chips?) and you’ll score a taste touchdown every time.

So what’s on the Raichlen Super Bowl party menu? Well, before the grilled pizza and Hill Country brisket, we’re warming up with:

Do you have a favorite dip you make on the grill? Post details, recipes, and photos on the Barbecue Board. Plus, try these other party food ideas you can offer up while the game is on.

In our next blog, you’ll find Super Bowl-driven Seattle planked salmon versus Colorado bison burgers. May the best team win.