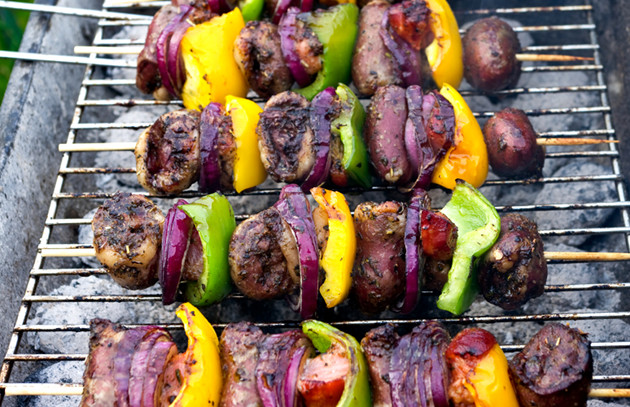 Today is Valentine’s Day. I’m giving my wife a heart-shaped card (or at least a card decorated with hearts). If I’m smart, I’ll throw in a heart-shaped box of chocolates.

The one thing I won’t do is serve her a dish that’s a barbecue icon in Peru and Bolivia, and that’s turning up grilled, or otherwise, served at an increasing number of cutting-edge restaurants in North America. I’m referring to beef, veal, lamb, and chicken hearts.

Exhibit #2. The Venison Heart Tartare served with wild herbs at The Willows Inn on Lummi Island in Puget Sound.

Exhibit #3. Chicago restaurants The Bristol and Frontier have featured beef heart pastrami and lamb heart grilled on sugarcane, respectively, on their menus.

Which brings me to the grandest grilled heart dish of all: anticuchos.

Picture this. You’ve just finished a night of club hopping in Lima or Cuzco. Your head spins (the result of pisco sours and the high altitude)—you desperately need some sustenance. You follow the scent of smoke and grilled meat to one of the innumerable pushcarts lined up late at night on Peru’s sidewalks and street corners and order what might be described as steak and potatoes on a stick.

When the Conquistadors arrived in Peru, the Incas had been enjoying anticuchos for centuries. The name came from the Quechua word anticuchu (“mountain cut,” literally), or perhaps anti-uchu (“mixture”). The traditional meat was llama.

The Spanish adopted the Inca kebabs, adding such European flavorings as vinegar, garlic, and cumin, and using the newly imported steer for the meat. The use of beef heart for anticuchos may have originated with the African slaves, brought to Peru to work the mines and plantations and fed the innards and other parts of the cattle the Spanish elite disdained to eat.

To be strictly authentic, you need to know about two special ingredients: aji panca and beef hearts. The former is a rust-red, medium-hot Peruvian chile that tastes like a cross between Hungarian hot paprika and Mexican chipotle. Either chile or a combination of the two can be used as a substitute. Aji panca and another Peruvuan chile, aji amarillo (yellow chile, literally) are sold fresh in Peru and are available frozen, dried, and in paste form in North America. Note: Look for them at Peruvian and Hispanic markets, or online, or follow the suggested substitutions.

As for beef hearts, they’re much prized by Peruvians and Bolivians and generally reviled by everyone else. If you’re feeling adventurous, you can likely find beef hearts at ethnic meat markets or by special order from your local butcher. One interesting alternative would be to use chicken hearts, which coincidentally, are popular at Brazilian churrascarias. If all this sounds a little too weird, a robust cut of beef, like sirloin, will give you the anticucho taste and mouthfeel—without the “ick” factor. Of course, you could go uptown, with a more tender cut, like rib eye or even beef tenderloin.

Finally, most Peruvian grill masters would roast and grind whole cumin seeds, but if you’re in a hurry, you can use ground cumin without too much sacrifice in taste.

So this Valentine’s Day, show some heart. Literally.

Have your own heart recipes and photos? Or other Valentine’s Day ideas? Share them with the community on the Barbecue Board.