Just in Time for Mardi Gras—Gumbo Gets Smoked 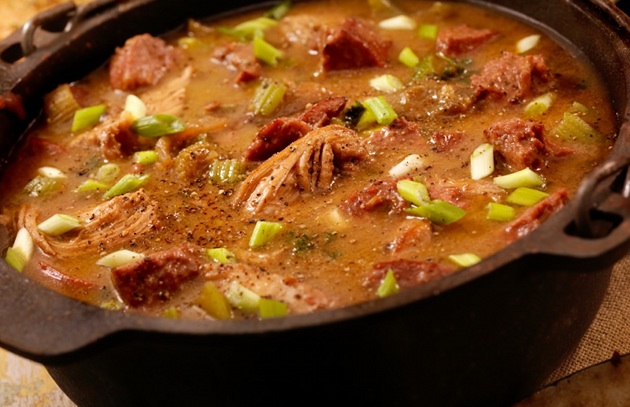 Little known fact about me: Long before I wrote Planet Barbecue or taped Primal Grill; long before I founded Barbecue University and launched the Best of Barbecue line of grilling accessories; long before I reviewed restaurants for Boston Magazine and penned a wine and spirits column for GQ, I majored in French literature and studied medieval cooking in Europe.

One of my favorite paintings then—and now—was The Fight Between Carnival and Lent (1569) by the Dutch master Pieter Bruegel.

You’ve maybe seen it: A corpulent man with a meat pie on his head rides a huge beer barrel like a steed. He’s a butcher (you can tell by his pouch of knives) and he brandishes a spit loaded with suckling pig, chicken, and sausages in a parody of a joust. His opponent is a gaunt figure armed with a long-handled baker’s peel bearing a meager pair of herrings. She’s propelled into mock battle on a wheeled cart (like a float) by followers carrying dry bread and pretzels, symbols—like the fish—of Lenten fasting.

All of which is a lengthy prologue to Mardi Gras—“Fat Tuesday,” literally—the last hurrah for observant Christians, who tomorrow will start the 46-day period of dietary deprivation leading up to Easter Sunday known as Lent. Carnival, from the Latin carne vale, loosely translates to “bye-bye meat.”

Carnival is celebrated in many places—France, the Netherlands, the Caribbean, and of course, Brazil, where 800,000 visitors descend on Rio de Janeiro for raucous street parties, parades, masked balls, and samba.

All delectable, of course, but why is nothing barbecued or grilled? Even New Orleans’ deceptively named “barbecued shrimp” is sautéed on the stovetop. If I have this wrong, please enlighten me. If you can explain the relative dearth of grilled foods in New Orleans’ rich culinary culture, we’d love to hear from you—please post your favorite Mardi Gras recipes and photos to the Barbecue Board.

In the meantime, remember Raichlen’s Rule: If something tastes good boiled, baked, fried, stewed, or sautéed, it probably tastes even better on the grill.

Which is why I applied my own philosophy to one of The Big Easy’s iconic dishes, gumbo.

Get my Smoked Chicken and Sausage Gumbo recipe.

Gumbo’s a perfect example of the multicultural influences that have made New Orleans’ food such a melting pot. The name comes from kimgombo, the West African word for okra. The powdered sassafras used to thicken gumbo (usually sold as filé powder) came from Native Americans. The French Acadians refined the dish, adding mirepoix, roux, and bay leaf.

So as they say in Louisiana: Laissez les bons temps rouler! Let the good times roll.

Get updates about the best recipes, techniques, and latest barbecue news in your inbox every other week. Sign up for our Up In Smoke newsletter.