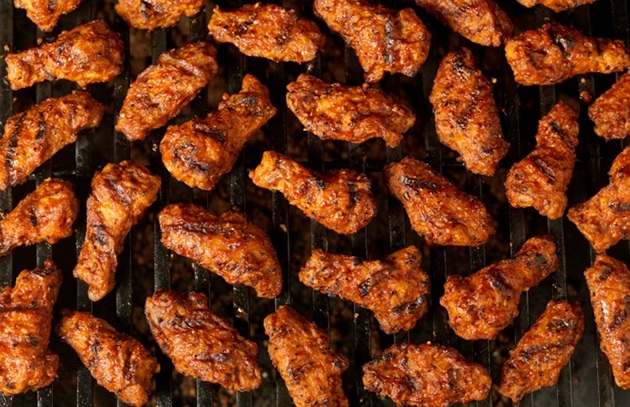 For my money, chicken wings rank among the most delectable bites on Planet Barbecue—popular in almost all grilling cultures, from Asia to Africa. And it’s no wonder. They’re the perfect finger food (which is what you want for tailgating), ideally combining crackling crisp skin with a few bites of tender, flavorful meat on the bone. (“Boneless” wings are an abomination IMHO.)

Asian street food vendors usually present chicken wings whole—a skewer keeps the wings fully extended as they grill, maximizing the wings’ exposure to the fire. (For an illustrative photo, see the cover of How to Grill). In the U.S., whole wings are likely to be separated through their two cartilaginous joints into “drumettes”—so called because they resemble mini chicken legs—and “flats,” the mid-section of the wing. Both have their partisans. Tips are either discarded or saved for chicken stock.

In my playbook, wings are usually prepared using my smoke-roasting technique, a combination of smoking and indirect grilling that adds delectable smoke flavors to the meat, discourages pesky flare-ups, and ensures crispy skin.

For planning purposes—and you’ve got to have a plan whether you’re cooking in the stadium parking lot or the backyard—allow 40 to 50 minutes for wings to cook to the proper temperature (165 degrees). I know…longer than you would think. If you’ve smoke-roasted the wings, there will be a bit of pink near the bone; don’t be alarmed as that is a chemical reaction between the protein and the smoke. If you haven’t added smoke, then there should be no pink by the bone.

Chicken wings are infinitely customizable. Below are links to some of my favorite wing recipes, but I’d love to hear about yours on Facebook, Twitter, or the Barbecue Board.