Two “Must Have” Books for Your Barbecue Library 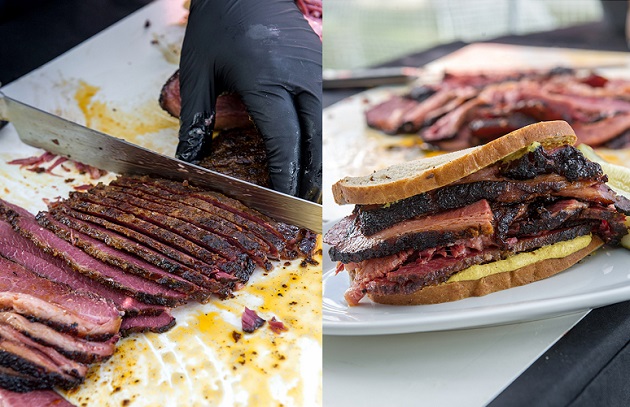 Most winning competition-level pitmasters keep their cards close to their vests, seldom revealing the secret strategies that consistently propel them to center stage (a “walk”) once the scoring’s complete.

Not these guys. They seem determined to spill the beans (barbecued, of course).

I first met the co-authors of Pitmaster, restaurateurs Andy Husbands and Chris Hall, in 2010 when they assisted me in preparing a live-fire feast for the crew of the USS Constitution in Boston Harbor. The previous year, their IQUE barbecue team won the Jack Daniel’s World Championship Invitational, the first New England team to win this prestigious title. (The 2017 contest will be held October 27-28 in Lynchburg, Tennessee.)

We had too much in common—like Boston and barbecue—not to stay in touch. Still, I was honored when Andy and Chris invited me to pen one of several essays and contribute a recipe to the book, beautifully photographed by Ken Goodman. (I shared one of my favorites, Caveman T-Bones with Hellfire Hot Sauce.) The final chapter is devoted to competition barbecue—a page turner that reveals why a pitmaster might spend $300 on a wagyu brisket when the top cash prize in the category is $250. Or spend a tedious evening scraping fat off the backside of chicken skin before packing for a long drive to the next contest.

Fascinating to me are the timelines, laid out with military precision, that accompany these award-winning recipes to ensure on-time turn-ins. The one for IQUE’S 180 Beef Brisket (180 being a perfect score in contests sanctioned by the Kansas City Barbecue Society) has a 2 a.m. start time and finishes at 1:30 p.m. Just reading the schedule is exhausting. This is also the first time I’ve seen a brisket recipe that includes injections of beef-flavored sodium phosphate, little known to the backyard barbecuer, but common in competition cooking. In addition to smoked meat-centric dishes, Pitmaster includes great sounding sides, cocktails, and desserts. (Who wouldn’t be intrigued by tiramisu built with Twinkies instead of ladyfingers?) Though I would likely do it on the grill in a cast-iron skillet, Cornbread with Butter, Honey, and Sea Salt sounds like a crowd-pleaser, a great dish for fall.

Bottom line: Pitmaster is a terrific resource for barbecue aficionados of all skill levels. In my experience, cookbooks eponymously named after restaurants are often poor investments. You see a short stack of them at the front of the house—maybe they’re even autographed!—and influenced by the good vibe, indulgent food, and a cocktail or two, you impulsively add one to your bill. You never cook from it, and eventually cull it from your library.

Buxton Hall BBQ Book of Smoke is not one of those books. If you’re more than an armchair barbecuer, you’ll read this engaging book (part autobiography, part cookbook) cover to cover, eventually spatter it with vinegar-based Hog Sauce or melted lard, and plaster its pages with sticky notes. And you’ll certainly want to visit its namesake, installed in an atmospheric old skating rink in Asheville, North Carolina.

You might even contemplate the purchase of a pick-up truck in order to transport cinderblocks and masonry sand. And of course, whole hogs. Yes, inspired by the Buxton Hall BBQ Book of Smoke, things could quickly get out of hand. Fortunately, author Elliott Moss believes barbecue is an egalitarian endeavor, a cooking method for the masses. No pit? No problem. He’s devoted a chapter to what he calls “quick smoking,” which involves one of two improvised devices and requires little in the way of equipment. (His restraint in the application of smoke is appealing.)

I was intrigued by the very portable smoker he built using an old-school Girl Scout mess kit and a handheld drill. Genius! And perfect for campers, fishermen, or backpackers. Detailed instructions are also included for a roomier tabletop smoker using two restaurant-style hotel pans—one perforated—and heavy-duty aluminum foil. Note: Unless you have a powerful blower above your stovetop, the author recommends using both of these smokers outdoors as they produce a lot of smoke. Originally from South Carolina, Moss has a deep respect for the barbecue traditions of his childhood; many of the recipes in the book were inspired by family favorites. His tips for barbecuing a whole hog and serving it in its own crisped skin—a Carolina tradition—are reason enough to buy the Buxton Hall BBQ Book of Smoke. But his many years in the restaurant business give him the bona fides to suggest Pulled Turkey, ember-roasted vegetables, Smoked Grits and Gravy, or Smoked Pimento Cheese. Truthfully, not everything is smoked or barbecued, i.e., the gumbo-like Chicken Bog his grandparents used to make. Or Thanksgiving-worthy Cider Brussels Sprouts with Cracklins, moistened with Hog Stock.

Desserts get their own chapter, heavy on pies, including one that’s ubiquitous in the South, meringue-topped Banana Pudding Pie.