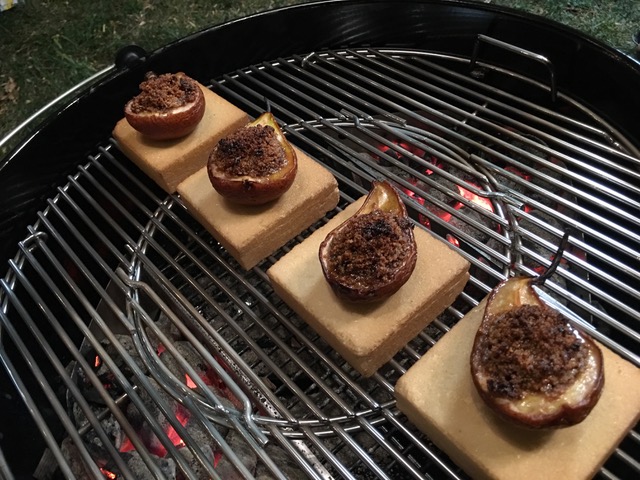 Another New Year already?! It seems like just yesterday I was writing my blog on BBQ Trends for 2017.  It’s time to dust off my crystal ball for the trends that will shape barbecue in 2018.

But first, a quick review of my 2017 predictions. Some came to pass and some didn’t.

Consider Trend #1: How (or more precisely HHOW) our food is raised matters as much as how we grill it. (The acronym, by the way, stands for Heritage, Heirloom, Organic, and Wild.) This one certainly shaped the way we shopped, barbecued, and grilled in 2017 and it will continue to do so this year.

Likewise, we certainly saw a lot of new steak cuts (trend #7) this year, from spinelis to Vegas strip steaks. And we certainly “cavemanned everything” (Trend #5) in 2017, grilling not just steak, but lobster, corn, even pineapple directly on the embers.

Of course there were a few trends I misread. Middle Eastern grilling (Trend #3) didn’t go mainstream quite the way I predicted (be patient—it may still), and almond wood (Trend #10) never left California as the must-have new grilling fuel.

Well, a new year is upon us and with it a new set of predictions. So in no particular order: Fusion ’que: Call it globalization’s upside. Call it melting pot extreme. It’s what happens when traditional American barbecue meets authentic ethnic cuisine and it’s happening more and more across the country. Case in point: the brisket ramen (Japanese noodle soup) served at Kemuri Tatsuya in Austin, Texas. Or the brisket tacos dished up at The Pit Room in Houston. (Like many of the new wave barbecue joints, they make their tortillas from scratch here, using—what else?—brisket drippings.) Look for more East-West mash-ups in the coming year, and be sure to let us know via Facebook or Barbecue Board what cuisines are fusing in your region. Philanthro-’que (food philanthropy): When Hurricane Harvey devastated Houston, Stan Hays and his Operation BBQ Relief roared in to provide hot meals to the thousands of people left homeless (and kitchen-less) by the storm. Since founding Operation BBQ Relief in 2011, the CNN Hero and his army of volunteers have served more than 1.7 million meals in 24 states to more than 40 communities that have suffered from devastating natural disasters. In a similar vein, the Spanish born super-chef, Jose Andres (whose restaurants include the amazing live fire chop house Bazaar Meat in Las Vegas) boarded one of the first planes to Puerto Rico after Hurricane Maria devastated the island. To date he’s served nearly 2 million people—dwarfing the efforts of FEMA. So what can you do? For starters, donate your time, barbecue rig, or cash to Operation BBQ, learn more here. Veal is back: Remember veal? That mild, sweet meat so spectacular grilled in the form of a veal chop? After decades of pariah status (and chef boycotts) on account of the cruel confinement conditions under which factory farms raised calves, veal is finally returning to restaurant menus and meat markets. But this time you can eat it with a clean conscience thanks to a new generation of ranchers that are raising calves in herds on pasture grass outdoors. Lori Dunn of Strauss Meats (the veal purveyor I use) reports that veal sales soared more than 10 percent last year. So how do you know you’re getting humanely raised veal? Look for the words “pastured” or “group raised” on the label. For ideas on how to grill this terrific meat, click here. Thin chops and steaks:  For decades, when it came to meat, bigger has always meant better: bible-thick steaks; baseball-dwarfing filet mignons; porterhouses that bury the plate. So imagine my surprise to find “thin cut” pork chops (with spicy mustard and grapes) on the menu and hot off the wood-burning grill at the trendy El Che Bar in Chicago. Or a whole article praising thin steaks and chops in a popular food magazine. The fact is that thicker doesn’t always mean better, and thin steaks and chops offer many advantages. They marinate and cook faster, offering a higher ratio of spice and smoke to meat. They expose more of the meat to the searing heat of the fire, resulting in a crustier, more savory exterior. Of course, Korean and Japanese grill masters have understood the virtues of thin steaks for decades. A 2-inch thick porterhouse is a steak of splendor, but so can be a half-inch-thick rib-eye. One final advantage: thin cuts often cost less per serving than thick ones. Planchas get smoky: The Spanish call it a plancha; Argentineans, a champa; and you even find it in Italy, where it goes by the name of piastra. I speak, of course, of a thick steel griddle you place on the grill for cooking small foods, like shrimp, fragile foods like fish and tofu, and foods you wouldn’t normally grill, like sunny-side up eggs. If you’ve read my blog, you know my fondness for plancha grilling. What’s new is using a plancha for smoking. Here’s how it works: Set up a charcoal grill for direct grilling. Heat and oil the plancha. The moment before you put on the food, add a couple handfuls of unsoaked hardwood chips to the fire. Then add the food, cover the grill, and use the plancha’s searing heat to crust the exterior. Meanwhile, the trapped wood smoke will flavor the food, producing chops, shellfish, and fish fillets with extraordinary texture and flavor. The rise of the pork steak: If you come from anywhere on Planet Barbecue, you know the virtues of a pork shoulder.   Cut that shoulder crosswise into 1/2- to 3/4-inch-thick steaks on a meat saw, and you wind up with one of the best kept secrets in the world of grilling: the pork shoulder steak. Thanks to its generous marbling and intrinsically tender meat, the pork steak is moister than a pork chop or loin chop and every bit as tender (if not more so). It also costs considerably less. Pork steaks readily absorb the flavors of rubs, marinades, mops, dips, and smoke and fire—a virtue well known to people in St. Louis (who grill and simmer them with a local barbecue sauce called Maul’s), and folks from Monroe County, Kentucky, who grill pork steaks, then dip them in a fiery mixture of hot sauce, melted butter, and lemon juice. Pork steaks can be hard to find in some regions, but if you make friends with your butcher, he/she should be able to cut them for you to order. Hasselback potatoes: OK, so there’s nothing new about hasselback potatoes, those crisp, buttery-cheesy, accordion-cut roasted potatoes invented at the Hasselbacken restaurant in Sweden (in business since the 1700s) and still served there today. What is new is how we cook them—on the grill—adding hardwood chips to the fire to generate wood smoke. Potatoes + butter + plus parmesan makes an unforgettable vegetable, and that’s before you perfume it with wood smoke. What’s also new is a nifty hasselback potato cutter to facilitate the delicate task of making razor thin parallel incisions in the potatoes to cause them to fan open, producing the effect of potato chips on the bone. Salt slab desserts: These thick slabs of pink Himalayan salt have become hot sellers at grill and cookware shops.   You’ve probably used them like cedar planks to roast fish; like bricks, to grill chicken; and even as salt-seasoned serving platters. What you might not realize is how great salt slabs are for grilling and smoke-roasting desserts. Preheat the salt slab slowly (this prevents cracking) and arrange brown sugar and butter-stuffed pears, honey- and coconut-basted bananas, or even marshmallow-topped brownies on the slab. Indirect grill or smoke as you would on a cedar plank. The slab delivers a mild even heat, while the salt seems to counterpoint and accentuate the dessert’s sweetness.

Do you have a prediction for grilling or barbecue trends in 2018? Share it with us on the Barbecue Board or on Facebook.