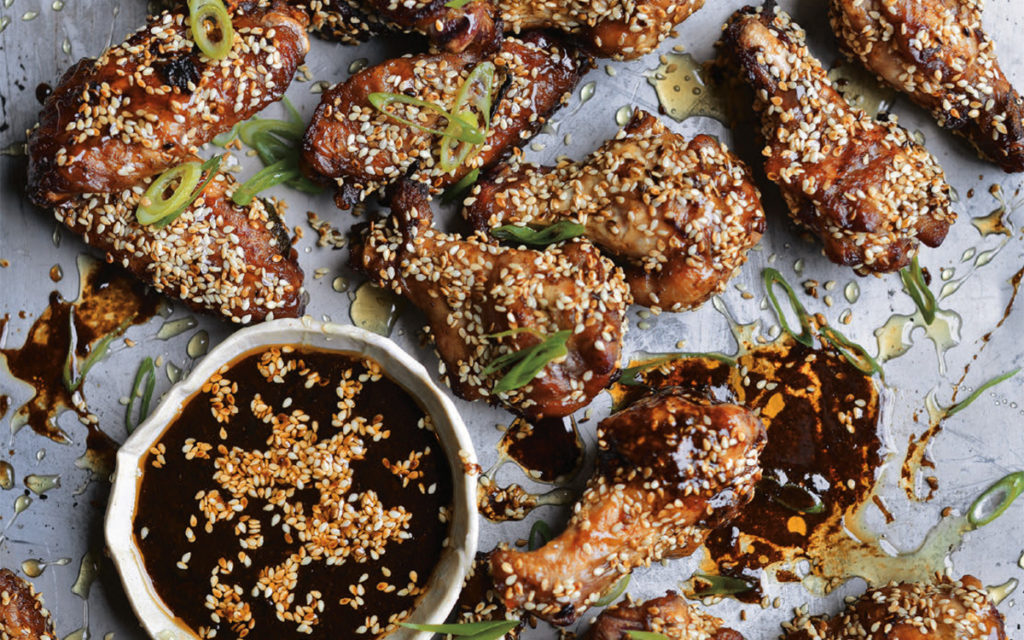 The New York Post reported that Americans eat an average of 290 chicken wings per year, or nearly 18,000 over a lifetime. Whoa! We’re behind. Are you?

A great excuse to catch up is just on the horizon: Mark your calendar for July 29, National Chicken Wing Day. In fact, why not throw a casual party next weekend to show off your chicken wing skills? Links to some of our favorite wing recipes are below.

Here at BarbecueBible.com, we actually get a lot of questions via email and social media about chicken wings. The most frequent one is, “The skin on my wings always seems to be rubbery. How do I achieve crisp skin?”

When we probe, we often discover the writer is attempting to smoke the wings at low temperatures (225 to 250 degrees) from start to finish. That method will produce rubbery skin as the temperatures aren’t high enough to render the fat. Our advice is to smoke-roast the wings at higher temperatures—at least 350 degrees—for 45 minutes to an hour, depending on the size of the wings.

We’ve also read for a few years about a method that involves adding baking powder to a dry rub before applying it to the raw wings, then letting the wings rest for 8 hours or more on a cooling rack, uncovered, in the refrigerator, before baking or indirect grilling.

Our first experiment with that method was a definite fail.

We set up the grill for indirect grilling and preheated it to medium, about 350 degrees. The coating browned prematurely, fell off the wings when we attempted to turn them, and after only 20 minutes, resembled toasted flour. But that wasn’t the worst part: The wings had a very unpleasant metallic taste.

We began by coating the wings lightly with extra virgin olive oil. (You could also use vegetable oil.) Add a couple of tablespoons of oil to a sturdy resealable plastic bag, then add the wings and seal the bag. Turn several times to coat the wings. Add your favorite rub and a tablespoon of aluminum-free baking powder to a second bag and transfer the wings to that bag, then shake to coat. The “aluminum-free” part is very important! We discovered it was the aluminum in the baking powder that gave the wings in our first experiment a metallic taste. The baking powder will not say “aluminum-free” on the label; you’ll have to read the ingredient list.

We did not bother to dry the wings in the refrigerator.

We set up our grill for indirect grilling and preheated it to 350 degrees. The wings were turned frequently after the first 20 minutes and were a joy to behold at the end of 45 minutes. They were beautifully and uniformly browned, the skin blistered, bubbling, and blissfully crisp, the meat perfectly cooked. The wings could have been doused in sauce the last 10 minutes, but we opted not to.

1. Save money by buying whole wings.

Save money by buying whole wings and breaking them down yourself. (Buy organic, air-chilled chicken when possible.) Lay each wing flat on a cutting board, then slice through the two knobby cartilaginous joints with a chef’s knife or cleaver. Reserve the “drumette” (it will look like a miniature chicken leg) and “flat” and either discard the wing tips or freeze them for stock.

2. Stretch whole wings out on skewers for maximum exposure to smoke and fire.

Alternatively, stretch whole wings out, Asian-style, on 12-inch bamboo skewers (soak the skewers in beer or cold water first, then drain) to maximize their exposure to the smoke and fire. This technique works best with larger wings. (For directions, see How to Grill, page 248.)

3. Avoid charring and flare-ups by indirect grilling your wings.

To avoid charring, flare-ups, and singed arm hair, indirect grill the wings for 30 to 40 minutes, turning once or twice. (Be sure to brush and oil the grill grate before starting as wings have a tendency to stick.) Put soaked, drained wood chips on top of the coals or in a smoker box for a smoky flavor. 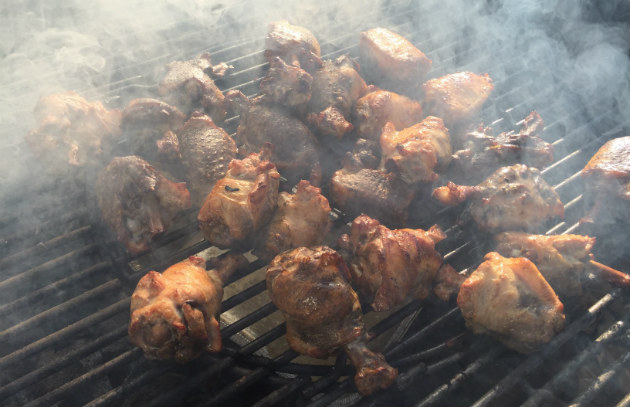 4. Test for doneness by making a small slit in the thickest part of the wing meat.

To test for doneness, make a small slit with a sharp knife in the thickest part of the wing meat. There should be no trace of pink at the bone—that is, unless you have smoked the chicken wings. Then you will see a smoke ring near the bone, but it should not appear bloody.

5. Apply wing sauce at the end of cooking time.

Apply wing sauce at the end of the cooking time or toss the wings in the sauce after removing them from the grill grate.

Ready to cook some wings? Try one of our favorite chicken wing recipes: 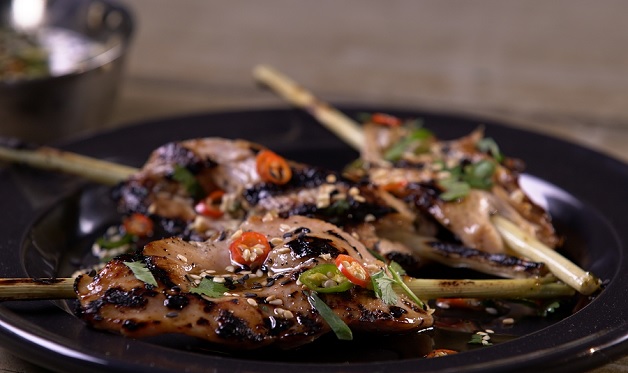