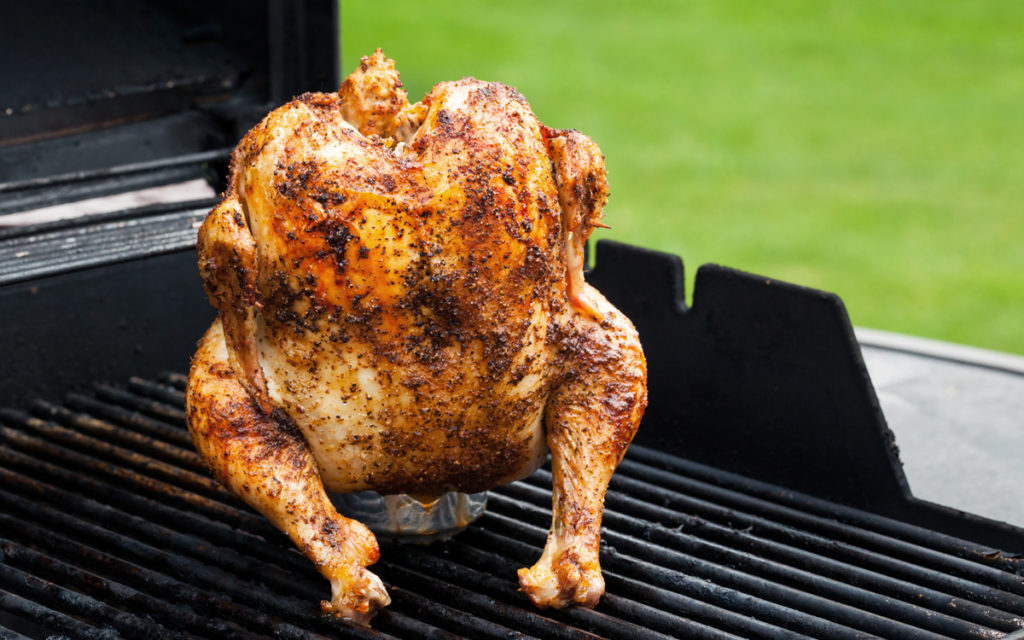 Twenty years have passed since a much younger Steven Raichlen prepared a beer can chicken on the Today Show.  That followed his New York Times story on beer can chicken, and yes, a Beer Can Chicken book (Workman Publishing) that has sold nearly a half million copies.

In recent years, there’s been a lot of internet trash talk about beer can chicken.   (It feels a little like a campaign to disprove the existence of Santa Claus to a kid.)

So how does this singular dish—and the notion of roasting a chicken on an upright open can of beer is certainly singular—stand up today?

But before we examine the controversies, first a bit of history.

Beer can chicken burst on the barbecue scene around 1995, and while I didn’t invent it (I learned it from a Texas barbecue team called the Bryce Boar Blazer), I did introduce it to the American mainstream.

The thermodynamic issues question just how much heat is conducted by the can and beer to the inside of the bird.   Not much, claims “Debunking,” which goes on to point out a disparity between the interior temperature of the bird (165 degrees F) and how much you have to heat the exterior to get there (180 to 190 degrees F).

Well, I won’t argue with their numbers (the only temperature I look for is 165 degrees in the thigh—the indicator the chicken is safe to eat).   But I will say that I have almost never eaten an overcooked beer can chicken—indeed, for me, one of the virtues of beer canning is that it’s a much more forgiving cooking process than straight indirect grilling or spit-roasting. So nota bene: if you tend to overcook chicken, beer canning is for you.

Myth #2: The beer can prevents the Maillard effect (a.k.a., flavorful browning) from occurring.

As far as the claim that that the beer can prevents the Maillard effect (a.k.a., flavorful browning) from occurring inside the cavity—well, I don’t know about you, but I look for the browning on the exterior.   Dark crisp skin is, of course, the best part of a roast chicken and thanks to its vertical position and the fact that the skin on the back of the bird roasts as well as the skin on the breast, beer canning gives you all the crisp skin you could wish for.

I’ve never seen a chicken brown in the cavity.  In fact, I often stuff a chicken with lemons or garlic or celery or herbs to flavor it from the inside out.   What matters to me about the interior is flavor.   I’ll save the Maillard effect—the luscious browning and cellophane crispness—for the skin.

Myth #3: Beer can chicken is dangerous.

Sure, sometimes a beer can chicken will fall over.   You pick it up with insulated food gloves or tongs and upright it.   Maybe a little hot beer spill (and maybe it doesn’t), but it’s certainly no more “dangerous” than handling a lit chimney starter.

But if you’re nervous about falling chicken, simply use a beer can chicken roaster.  It holds the bird upright and the drip pan collections the hot fat.   And should you wish to try “beer can” chicken with wine, cider, or another beverage, simply fill the stainless steel canister. 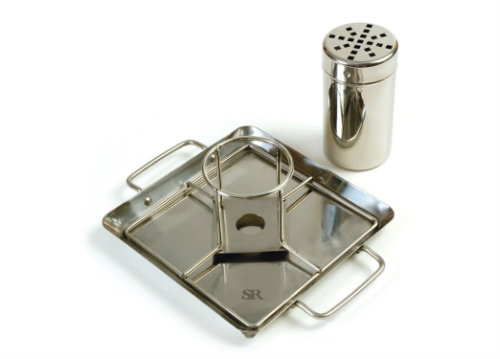 Another advantage of my beer can chicken roaster is the drip pan at the bottom.   Better fat in a drip pan, then flowing freely onto your grill (which it can cause flare-ups) or onto your deck.   (Although common sense calls for placing a foil drip pan under your chicken under the grill grate to catch the dripping fat.)   By its very nature, grilling involves hot coals, hot fat, sharp knives and other pointy implements (not to mention alcoholic beverages).   Yet hundreds of millions of people do it around Planet Barbecue each day without injury.   Once again, I call on common sense—if you’re too drunk or otherwise intoxicated to cook a beer can chicken safely, you shouldn’t be at the grill. 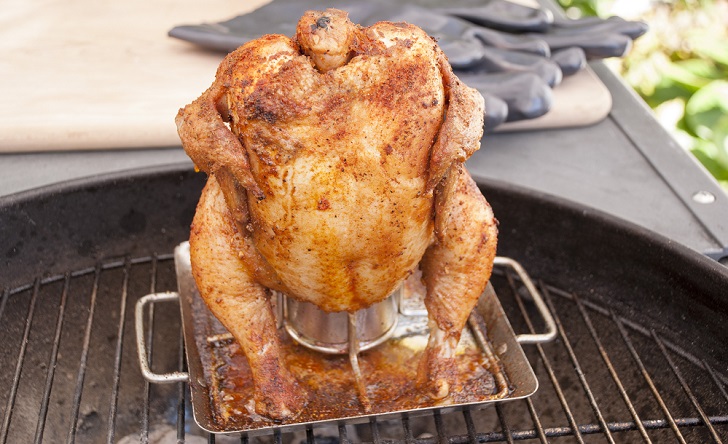 As far as “contamination” by the ink on the beer can label, the can itself, or the plastic lining, this is the one thing we did have tested in a laboratory before we published my Beer Can Chicken book.   We did extensive testing—not just on chickens—but quail, duck, and even turkey—not just with beer cans, but with soda and fruit juice cans.   We wanted to see if any residue—from the metal can, plastic liner, or label ink (printed with edible dyes as it turns out)—wound up in the meat. In test after test, it did not.   If beer companies have not embraced the process officially, well, we live in a highly litigious society.   I don’t imagine beer companies object to any additional sales that may have occurred through beer canning.   In any case, I’ve never seen a warning label that reads “do not insert this beer can in a roast chicken.”

Which brings us to the claim that the steaming beer adds flavor and keeps the bird moist.   Well here the myth busters may have some credence.   I’m not sure honestly and objectively I could tell the difference blindfolded between a beer can chicken cooked on a can of Budweiser and a second one cooked on a can of Guinness—or for that matter, on a can of Coke.   One thing I can say for certain: the more beer you drink, the more pronounced differences seem to become.

Does the steaming beer keep the bird moist?   I like to think so, although other barbecue websites correctly state that the evaporation of the beer (i.e., its transfer from the can to the chicken) is minimal.   Here I must rely on experience: beer can chicken just tastes moister than most conventional roast chicken.   Scientifically, I can’t explain why.

This brings me to one thing beer canning does that other cooking methods don’t.   It forces you to cook the bird in an upright position.   This assures uniform browning on the back and sides as well as the breast.   (Remember all that Maillard effect roasting and crisp skin?)   It may also foster moistness.   I come to this theory after pondering how people spit roast chicken around Planet Barbecue.   The fast majority of rotisserie masters skewer their chickens perpendicular to, not parallel to the spit.   This means they roast at least part of the time in a vertical position.   I’ve seen the practice in France, Turkey, Thailand, and South America.   It must keep the bird moist.

But all these arguments about physics and chemistry miss the most important benefit of beer can chicken.   It’s fun!   There’s whimsy and irreverence to roasting a chicken upright on a can of beer.   It’s fun to see, fun to do, and fun to serve.

Happily, not everyone is trashing beer can chicken.   New York Times writer Sam Sifton (no slouch when it comes to good times outdoors) included beer can chicken in a pretty spectacular summer feast in the Times Sunday Magazine.

And every year at Barbecue University, I ask if there’s anyone in the audience who has never seen beer can chicken.  Inevitably, a few students raise their hands.   So every year, I add beer can chicken to the menu and every year, the finished chicken—neck cavity steaming, skin crisp and brown, meat supernaturally moist—never fails to bring smiles to newbies and highly experienced grillers alike.

So I’m sticking with beer can chicken.   It looks cool.   It tastes great.   And it’s fun.   Santa Claus, your secret is safe with me!

Got an opinion either for or against beer can chicken?  Let us know on Facebook, Twitter,Instagram, or the Barbecue Board!

For more Beer Can Chicken, check out: 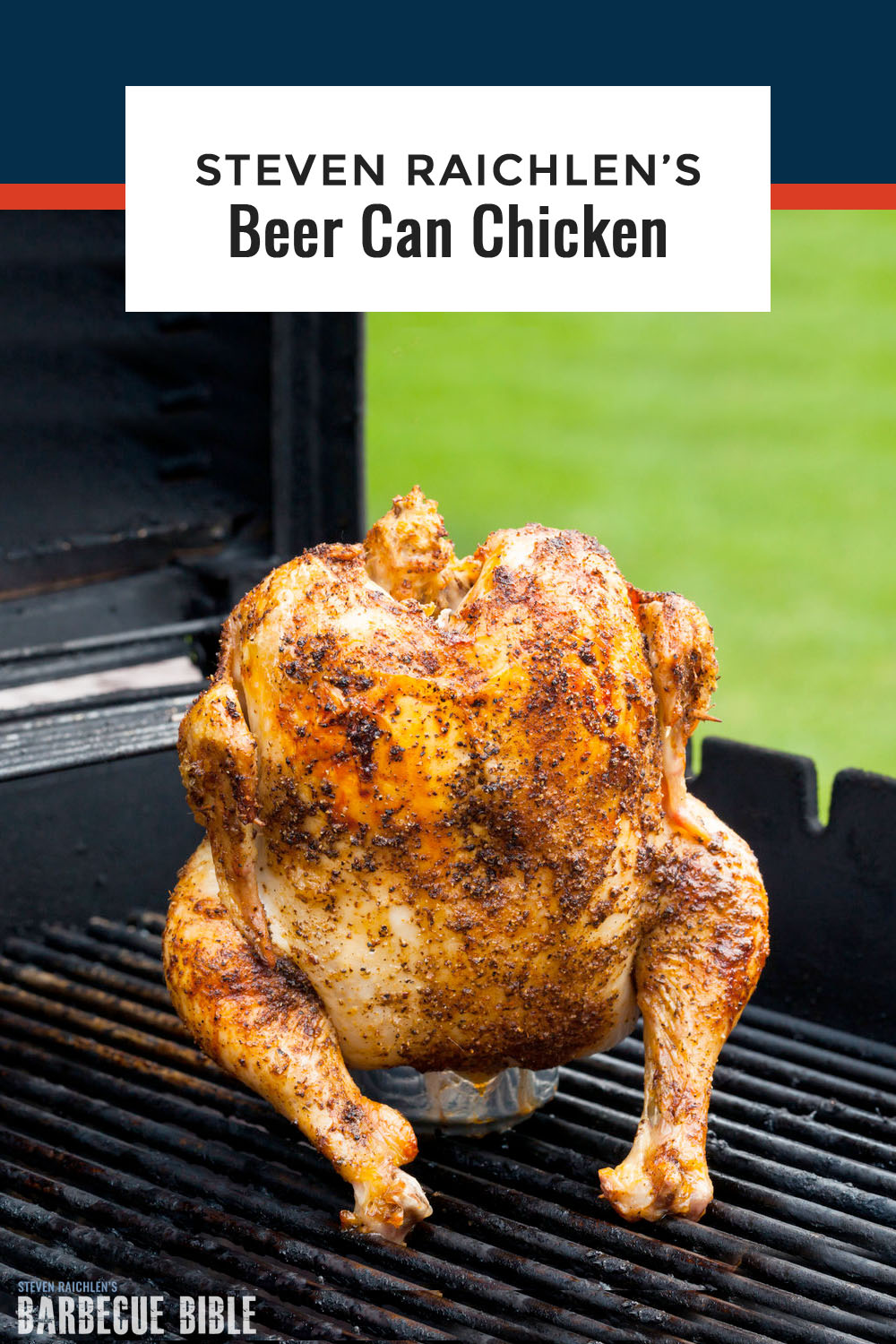