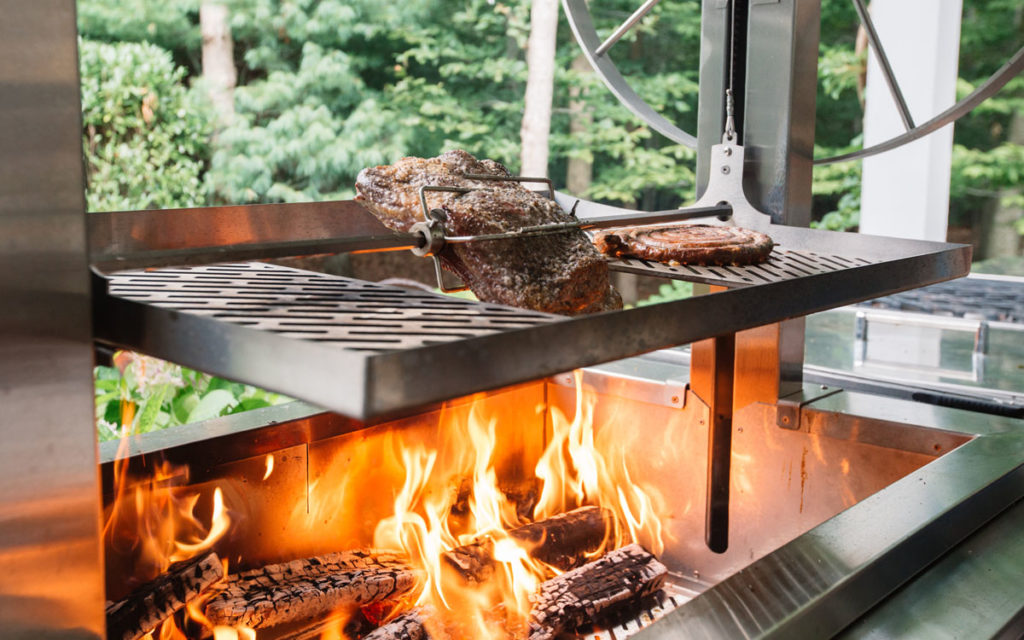 Wood is the premier fuel for grilling, whether you burn mesquite to grill a steak in Texas, hickory to roast a pork shoulder in the Carolinas, alder to perfume salmon in the Pacific Northwest, or pimento (allspice) wood to cook authentic Jamaican jerk.

The discovery of fire by our earliest ancestors was a major turning point in human evolution. Wood’s importance as a cooking fuel has been recognized for millennia, and still dominates the grilling in South America, Europe, Africa, and beyond.   In this country, outdoor cooking was nearly always done over wood. It wasn’t until after WWII that Americans began their love affair with charcoal (thanks to the resourcefulness of Henry Ford), and in the 1950s, with propane.

Today, wood fire grilling is enjoying a renaissance. During the past few years, many high-end restaurants have added spectacular wood-burning grills to their kitchens with thrilling results. Now, serious home cooks are doing the same thing in their outdoor kitchens.

On the leading edge of this trend is Kalamazoo Outdoor Gourmet, a custom grill manufacturer that 20 years ago, introduced the world’s first hybrid grill, capable of cooking with wood, gas and charcoal.  According to Kalamazoo, this Hybrid Fire Grill “is designed, engineered and built to outperform and outlast any other professional gas grill.” I first became acquainted with this 450-pound stainless steel stunner (its burners are made of cast bronze) when one was delivered to Barbecue University. Students’ jaws dropped when they saw it. Capable of reaching temperatures of 1000 degrees or more when fueled by wood or charcoal, it’s been called “the Rolls Royce” of grills. Indeed. Hand-crafted in Kalamazoo, Michigan, it carries the signature of each artisan who worked on it. 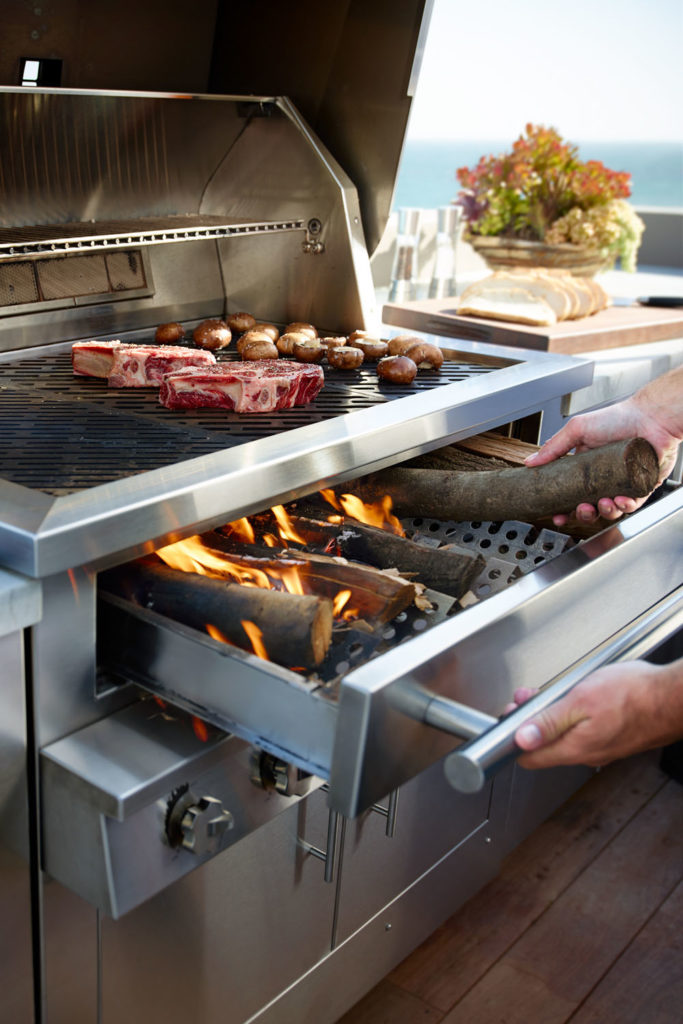 Another high achiever in the Kalamazoo line is the Gaucho Grill, a wood-fired Argentinean-style grill and rotisserie. Perhaps you’ve seen the free-standing version of the Gaucho on my shows, Project Smoke and Project Fire. You build a wood fire in this handsome stainless steel behemoth, then raise or lower the grill grate aided by a 30-inch spoked flywheel. A motorized rotisserie spit functions independent of the grill grate and can accommodate an incredible load of meat. There is not another wood-burning grill on the planet quite like it.

The Gaucho also incorporates a gas burner to get the wood fire off to a roaring start—a handy feature.

So which wood should you use?

A lot of ink has been spilled (some of it mine) about which wood smoke goes best with particular meats or seafood. Some people go to great lengths to match particular woods to foods—for example, apple with pork or cherry with chicken—with the zeal of oenophiles matching wines to specific dishes. (Personally, I think the wood variety matters less than how you burn it. I’m not positive I could discern the difference between pork shoulders cooked over two different fruitwoods.) 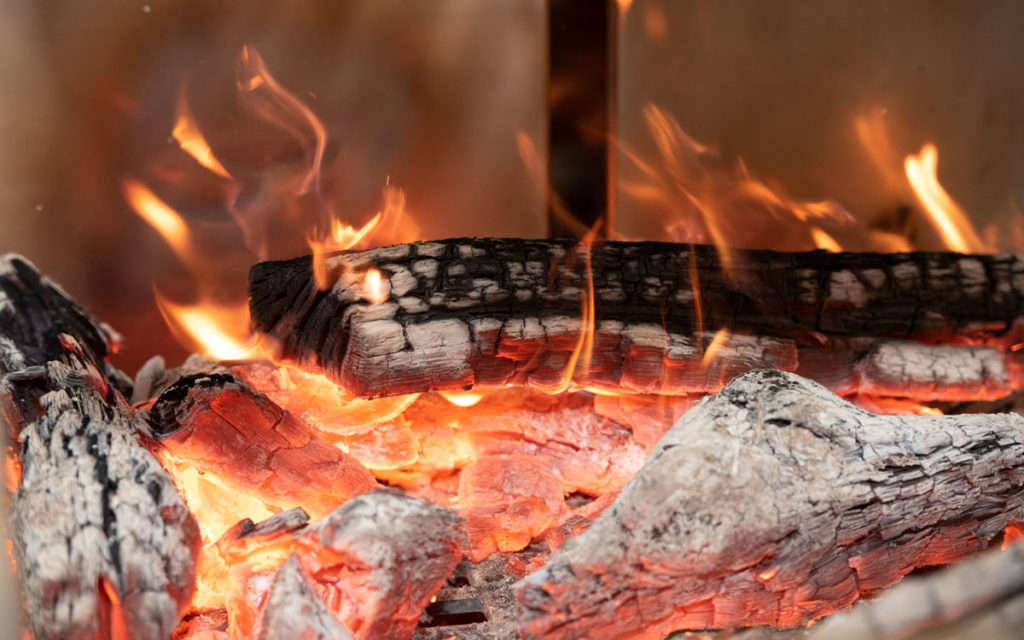 For the purpose of grilling, wood can be divided into two general categories: forest woods and orchard woods. The former includes nut woods like hickory, pecan, and oak, and wild woods like maple and alder. The latter includes fruitwoods like the afore-mentioned apple and cherry, as well as peach, pear, and mulberry. Of course, there are exotic woods, too. Among them are camphor wood, used for smoking in China, and pimento wood from Jamaica’s allspice tree. Traditionally, people grilled with the wood(s) prevalent in their area. (Note: Softwoods like pine, evergreens, spruce, etc., are not often used for smoking—they put out too much soot.)

Why Wood is My Favorite Fuel

Why is wood my favorite fuel for grilling and barbecuing? First, there’s the flavor-boosting caramelization that takes place in meats and plant sugars when food is cooked over the high, dry heat of a wood fire. And the fragrant smoke released when you burn wood enhances the flavor even more. It turns out there are nearly 1000 flavor-producing compounds in wood smoke. Among them are creosol (associated with the smoky peat flavor of Scotch whisky), and vanillin (source of a vanilla-like sweetness in smoke).   Flavor production peaks during pyrolysis (conversion of the lignin in the wood to flavorful gasses).   This takes between 450 and 750 degrees F—the temperature sweet spot of a wood-burning fire.

The chief challenge to grilling over wood is heat control.   To increase or decrease the heat on an Argentinean-style grill like the Gaucho, for example, simply raise or lower the grill grate with the flywheel.

When wood grilling in a fixed grate grill, like the Hybrid Fire Grill, build a multi-zone fire.   Regulate the heat by moving the food closer to or further away from the heat.

For more information on the Kalamazoo Hybrid Fire and Gaucho grills, visit Kalamazoogourmet.com.   And order a copy of the stunning Food + Fire by my friend and Kalamazoo’s grill designer, Russ Faulk.