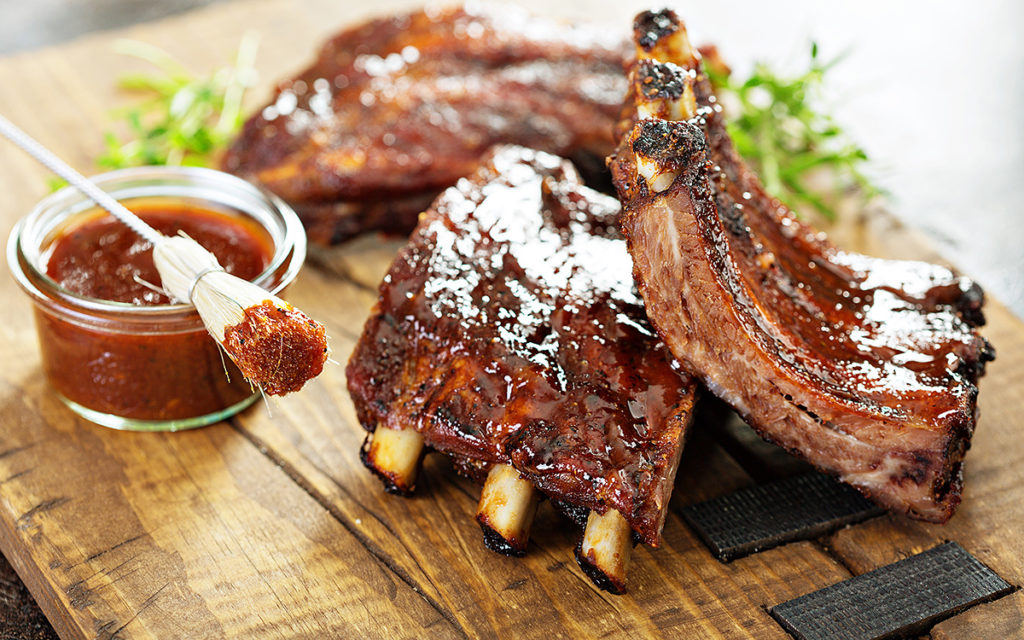 Is there anything more satisfying than barbecuing a rack of perfect pork bones? Tender and succulent, with a rub that enhances the flavor of the meat, a complementary glaze or sauce, and perfumed with just the right amount of wood smoke. Eating them is like communing with our cave-dwelling ancestors, dining without utensils, simply using our hands, and sharing an experience that is joyful enough to bridge the gap between our primal fires.

Ribs are finger food at its best.

What accounts for ribs’ universal popularity? I think there are a number of reasons. First, meat that’s near the bone tends to be more well-marbled and flavorful, and no other cut offers a higher proportion of meat to bone (this is especially true for babybacks). Second, the bones give the meat structure, presenting a broad surface to smoke and fire, and keeping the meat from shriveling up on the grill. Third, ribs can be cooked via myriad methods, including direct and indirect grilling, spit-roasting, braising, and smoking. Finally, ribs are just unabashedly fun to eat.

A rack of ribs—fragrant with spice, dark with smoke, and glistening with juices and sauce—is the very embodiment of the spirit of barbecue.

But despite the popularity of these meaty staves, a surprising number of people are intimidated by the prospect of cooking ribs. Granted, there is a lot of confusion about ribs—how to prepare them, season them, cook them, and serve them. When I’ve informally polled students at Barbecue University about dishes they’d most like to learn, they almost universally want to learn how to grill fish, steak, and barbecue the perfect rack of ribs.

My book, Best Ribs Ever: 100 Killer Recipes is like a private class in grilled and smoked ribs. Your rib confidence will grow exponentially. You’ll learn the difference between baby backs (also called loin ribs) and heftier spares. What are “St. Louis-Cut” spareribs? Why you should never boil ribs before grilling or smoking, and much, much more. But here, I’ve consolidated some of my top rib tips, tricks, and hacks to make sure you’ll be eating superlative bones by the weekend. I urge you to start with my recipe for First-Timer’s Ribs, which incorporates many of the following lessons.

A tough membrane called the pleura can be found on the back side of the bones. In some cases, the butcher has already removed it, especially when selling babybacks. Because it impedes the absorption of the rub and is chewy and unpalatable, I like to remove it. My method is simple: I carefully work a butter knife or the tip of a meat probe under the membrane on one of the middle bones, lifting it away from the bones. Then, using a paper towel, I pull the membrane off. If you’re lucky, it will come off in one or two pieces; sometimes, you have to work a little harder. There is a second very thin membrane underneath the first. Leave it alone as it holds the bones together.

2. Seize opportunities to add flavor to your ribs.

You have several opportunities to add flavor to pork ribs, beginning with the rub. My favorites are represented in my new Project Smoke line of regionally-inspired barbecue rubs; try Kansas City Smoke Rub, Carolina Pit Powder, or Santa Fe Coffee Rub. Once the bark has set (after an hour or so), you can use a mop sauce to add moisture and flavor. And finally, near the end of the cooking time, you can paint the ribs with your favorite sauce. Finish the ribs over direct heat during the last 10 minutes to “set” the sauce. (Do try my Project Smoke Lemon Brown Sugar Barbecue Sauce. It’s fantastic on ribs!)

When cooking more than one rack of ribs, use what I call a “rib condominium,” a.k.a., rib rack. It holds the ribs upright, and enables you to barbecue four racks in the grate space typically needed for one. The vertical position encourages the ribs to baste themselves as they cook. 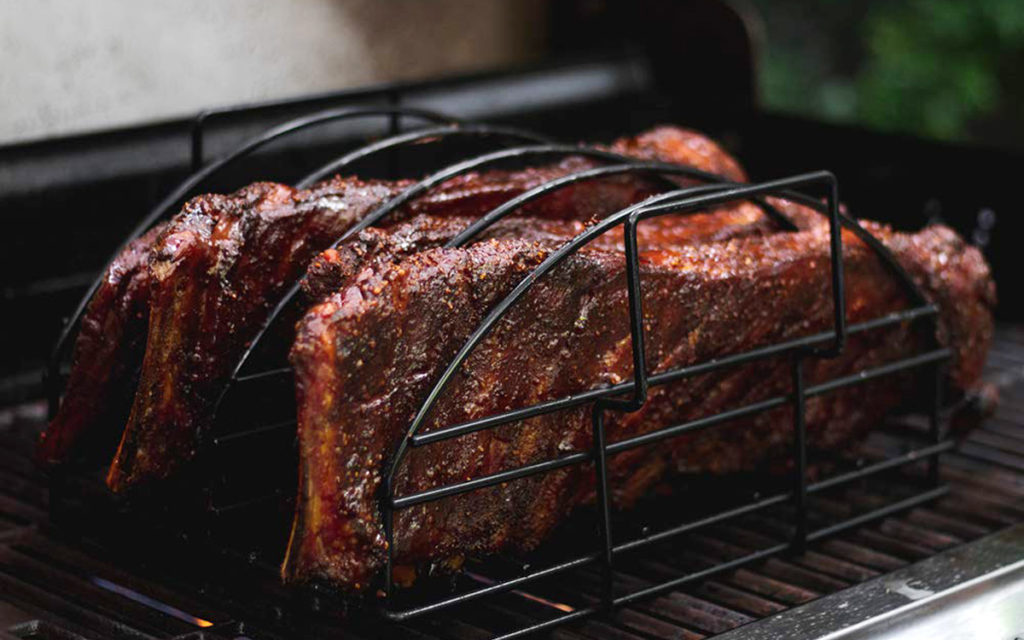 You have lots of options when cooking ribs, including the popular 3-2-1 method, which calls for smoking the ribs for three hours, wrapping in foil for two, followed by another hour, sauced and unwrapped. (A variation of this method is called 2-2-1.) Recently, another method has been gaining traction—it’s called Team 275, and seems to appeal to people who primarily use electric smokers and are looking for “set it and forget it” temperatures. Personally, I like to hot-smoke pork ribs at higher temperatures, 325 to 350 degrees. I can put a righteous rack of ribs on the table in under 2 hours.

5. Sauce at the end of cooking your ribs.

Most barbecue sauces have a sweet component, either sugar, honey, maple syrup, agave nectar, fruit or fruit juice, etc. If applied too early, they will burn, giving your ribs a bitter taste and unattractive appearance. (Mop sauces, on the other hand, do not contain sugar, and can be spritzed or mopped on the ribs throughout the cook to flavor the ribs and keep them moist.) Do try my Project Smoke Lemon Brown Sugar Barbecue Sauce. It’s fantastic on ribs!

6. Use intuitive tests for doneness.

Typically, I use an instant read or remote meat thermometer to determine the temperature of grilled or barbecued meats. But it can be difficult to get an accurate reading on ribs because of the close proximity of the bones to each other. Therefore, more intuitive tests for doneness come into play. Check to make sure the meat has shrunk back from the ends of the bones by about 1/2 inch. Or using tongs, carefully lift the ribs from one end: if done, they will flex, and even begin to pull apart or shred in the middle of the rack. (Perform this test over the grill grate so you don’t drop them.) You can also insert a toothpick between the bones in the thickest part of the meat. If it goes in easily, they’re done. 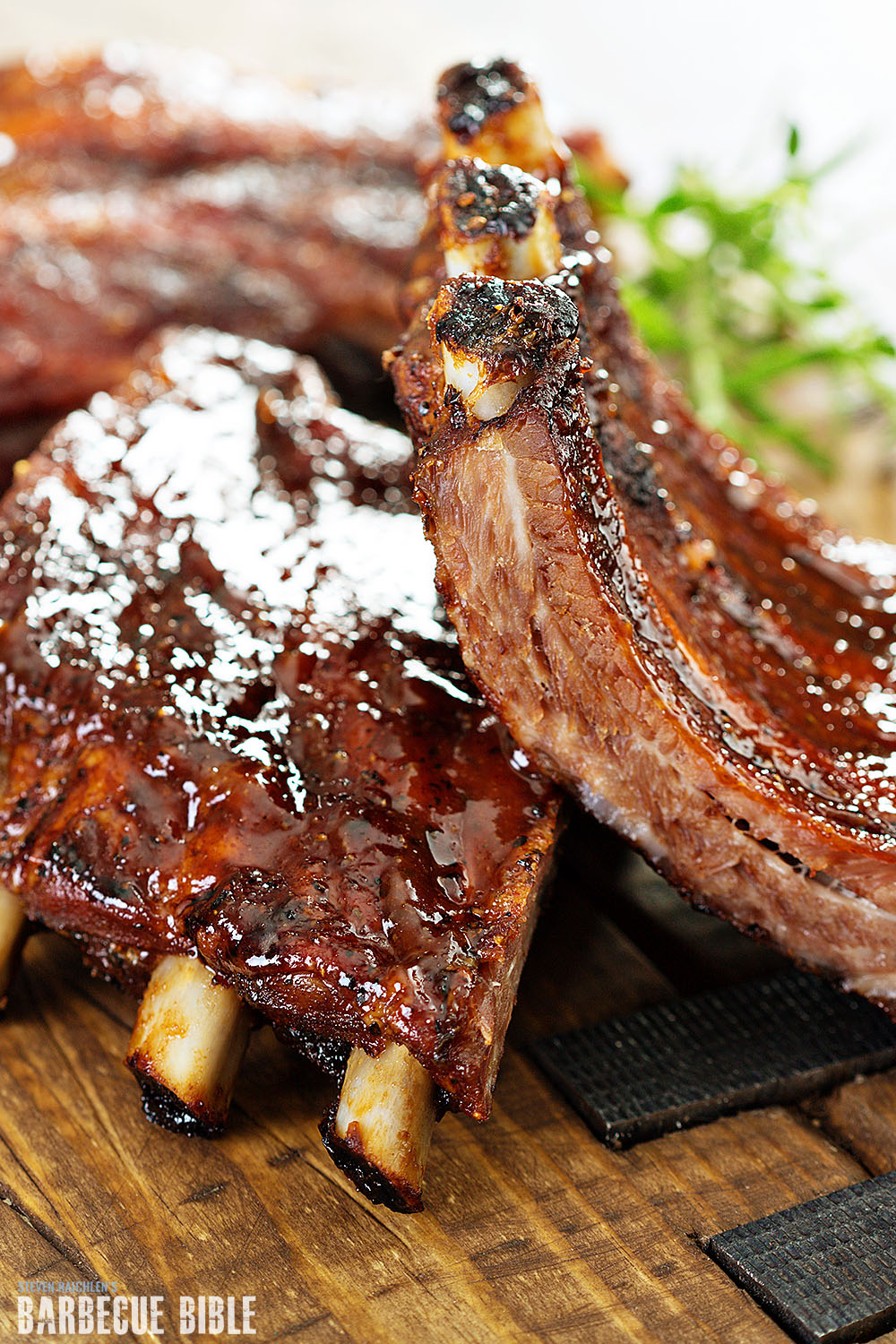 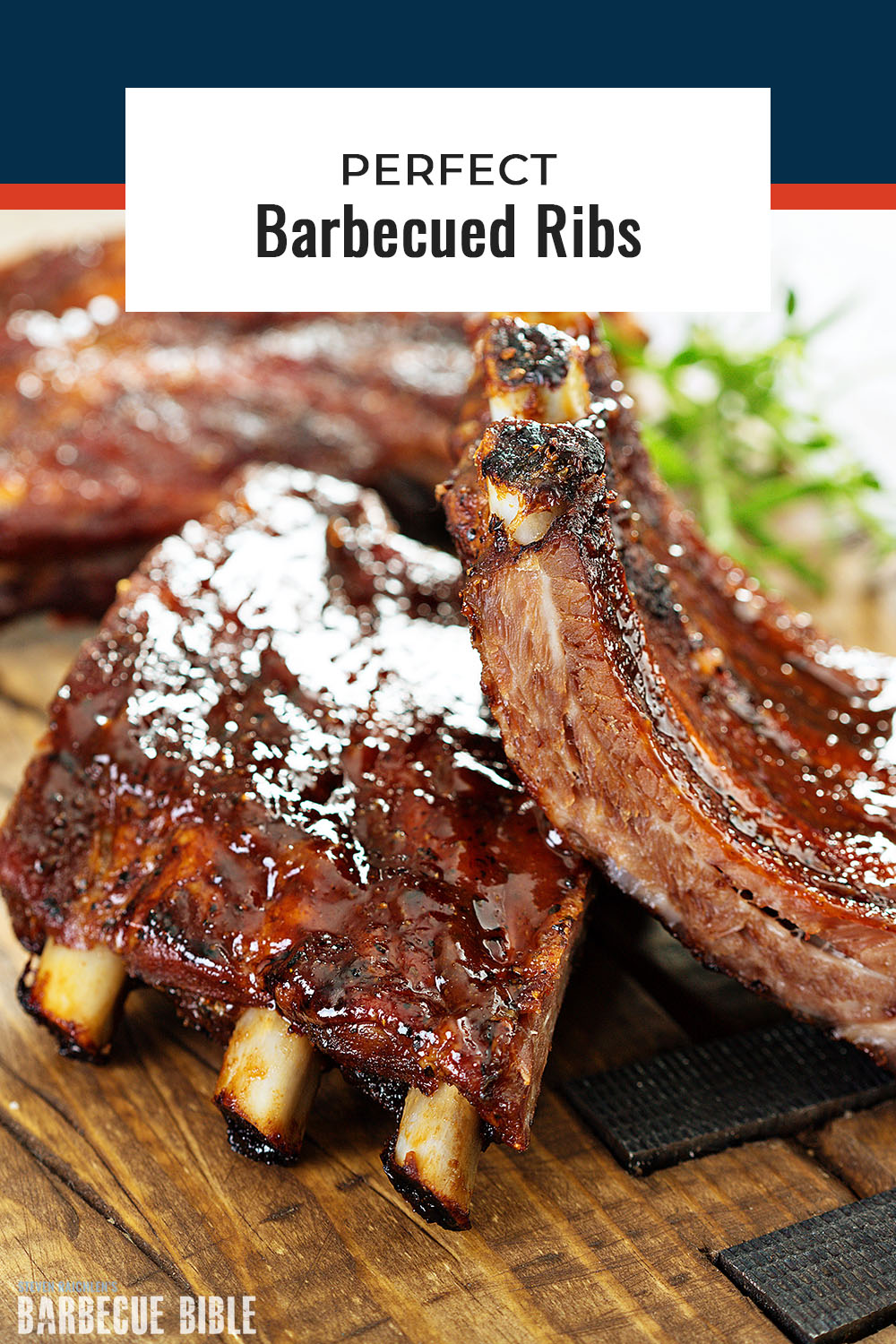