Taking Holiday Ham to the Next Level 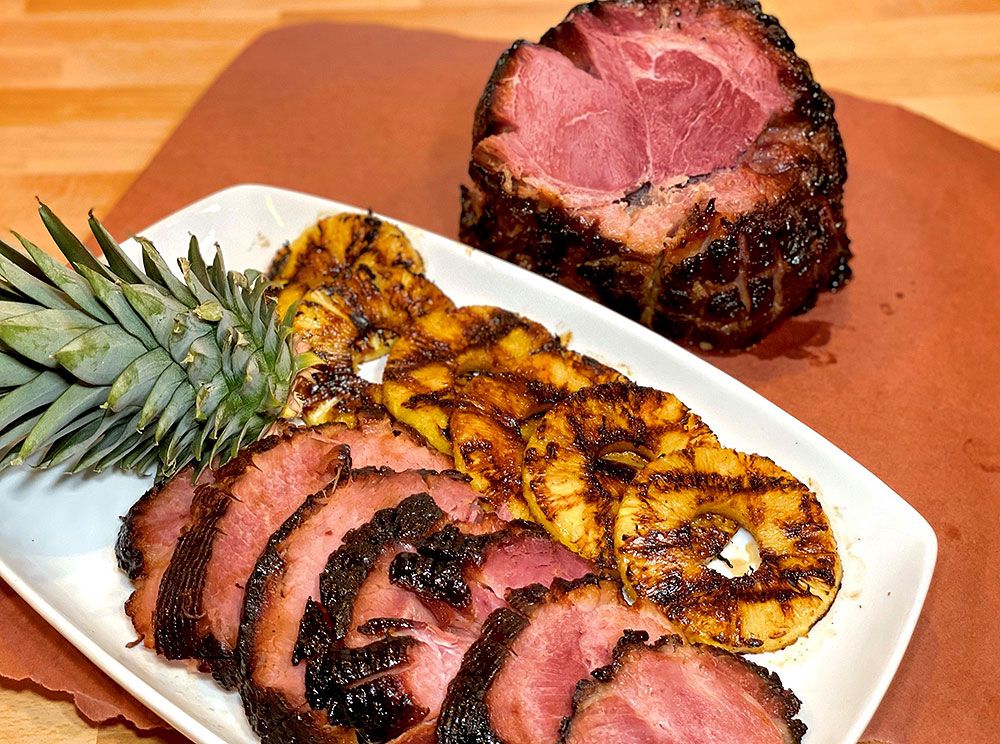 It looks a bit like a football. It comes from a hog known as “the Kobe beef of pork.” It’s sweet, salty, and smoky, the way a proper ham should be—but with a flavor that seems to go on forever. And it’s about to get even better—burnished with a pineapple-brown sugar glaze and electrified with Jamaican jerk seasoning. 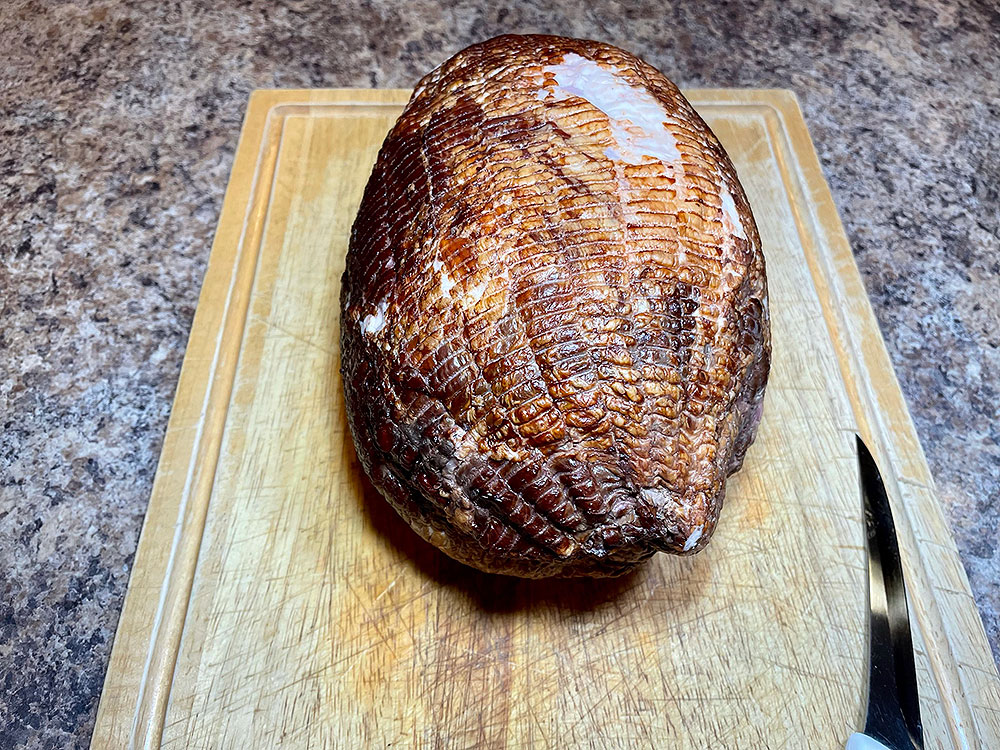 Do I have your attention? Please meet the Mangalitsa Smoked Ham by Holy Grail Provisions.

Mangalitsa is one of those old-timey heritage hog breeds—originally from Hungary—and today prized for its creamy white fat and meaty red flesh. The ham is cured with sea salt, maple and brown sugar, cherry powder, cinnamon, and cloves. Notice I didn’t mention nitrates. The meat acquires its inviting rose color and rich umami taste from the sodium nitrite naturally found in celery juice.

A slow smoke over smoldering hardwood delivers a mahogany-colored “bark” (crust) and intense smoky flavor. And because it’s boneless, this is one ham that’s simple to roast, easy to carve, and incredibly versatile to serve.

Holy Grail Provisions is the brainchild of Cameron Hughes, and if the name sounds familiar, you’re probably a wine buff. A renowned négociant (wine broker), Hughes as long been known for his uncanny ability to ferret out premium wines for reasonable prices. In 2018 he brought the same level of connoisseurship to meat, launching Holy Grail Provisions to sell Japanese and American wagyu, Kurobuta pork, carrot-finished beef—all of it humanely raised and hormone- and antibiotic-free.

Which brings us back to their Mangalitsa Smoked Ham.

To cook the ham (unlike most hams, this one requires cooking), we enlisted the help of Steve Nestor, fire wrangler at Barbecue University and on my Project Fire TV show. Steve is the guy who builds our grills and keeps them burning. If the wind is howling and it’s 30 degrees outside, as it was in Massachusetts where Steve lives, he’s definitely the man you want to cook your ham.

“I set up my Big Green Egg XL for indirect grilling at 350 degrees,” explains Steve. (The Egg is particularly effective at holding the heat in cold weather.) “I added 3 applewood chunks to the fire to generate a little wood smoke.” While the Egg heated up, Steve cut a crosshatch pattern into the surface of the ham to create grooves to capture the glaze. This also looks cool as all get out, and you should never under-estimate the importance of the cool factor. 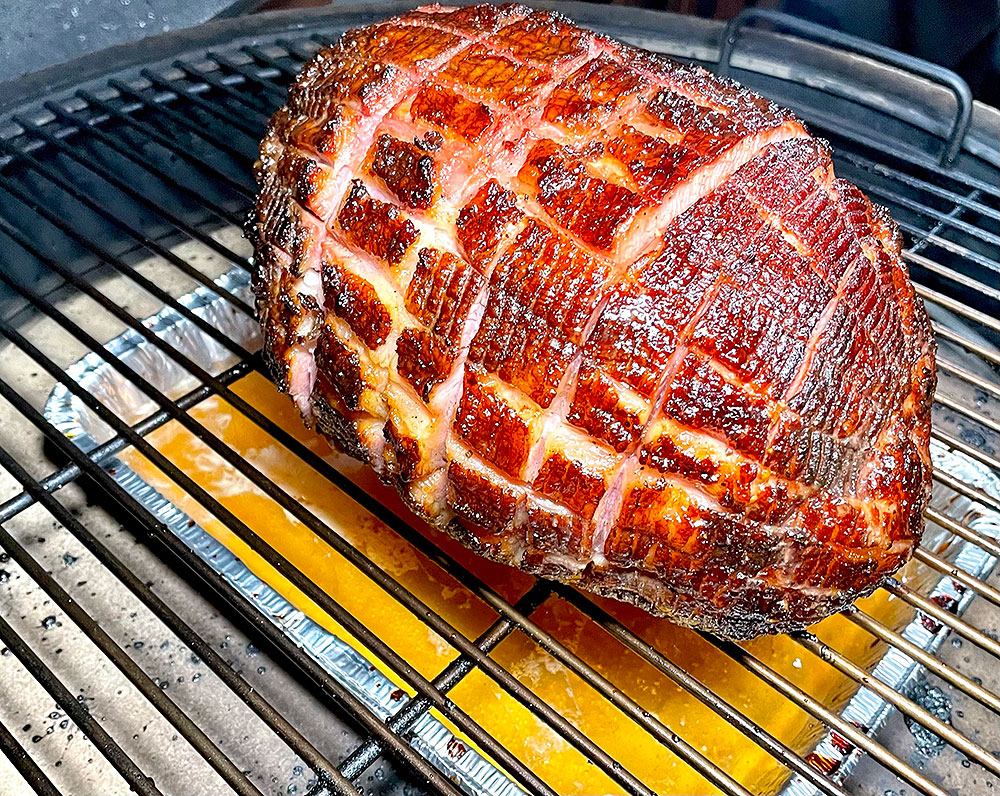 For the glaze, we came up with a riff on the classic ham studded with cloves and decked with pineapple slices: a sweet fruity glaze made with brown sugar and pineapple juice, with a shot of Jamaican jerk seasoning (1 to 2 tablespoons) to kick up the heat.

Steve started basting the ham with glaze every 30 minutes, and continued basting every 20 minutes. It took 2-1/2 to 3 hours to reach an internal temperature of 160 degrees. 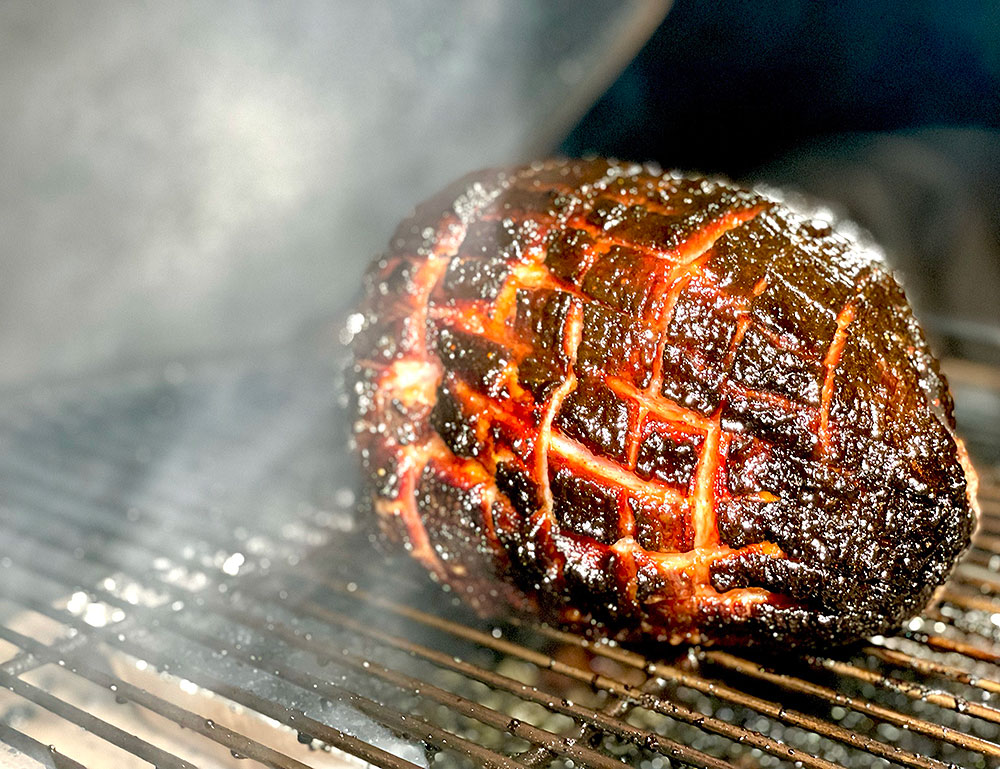 The aroma will be so intoxicating, you’ll want to carve the ham right away. If you have the patience to rest the ham for 20 or 30 minutes (on a wire rack over a sheet pan), the meat will be even more succulent and tender. Drape a sheet of foil over the ham to keep it warm, but do not bunch it around the meat or you’ll make the crust soggy.

Meanwhile, Steve set up his grill for direct grilling and heated it to high. He brushed fresh pineapple slices with the glaze and grilled them until darkly browned, 2 minutes per side. (Give each slice a quarter turn after 1 minutes to lay on a handsome crosshatch of grill marks.) 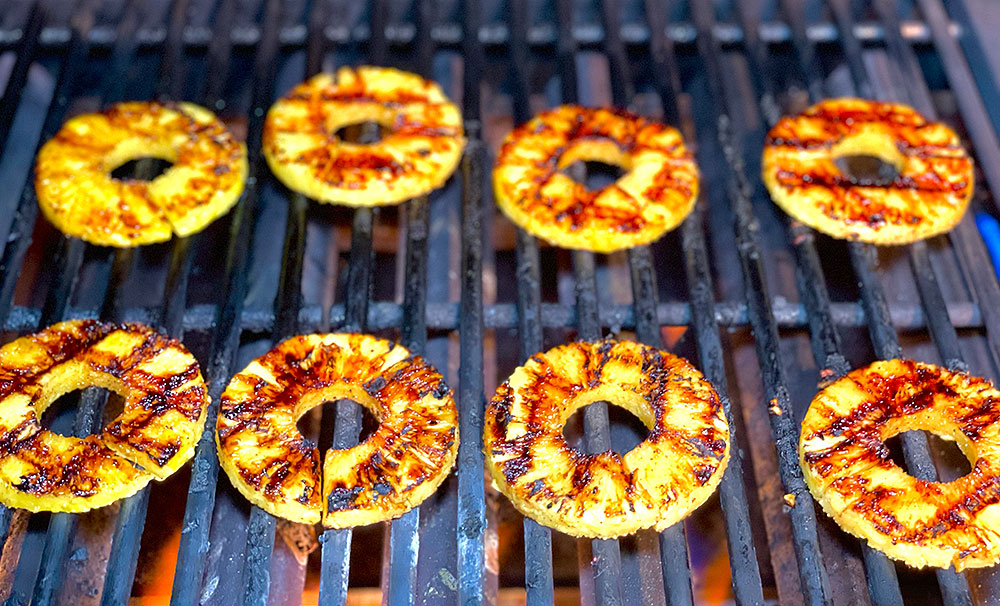 Now the fun part: Transfer the ham to a cutting board and, using a long knife, thinly slice it crosswise. Serve the ham with grilled pineapple and any extra glaze spooned on top.

“The ham was smoky, juicy, salty as you would expect from a ham,” says Steve. “The meat had a rich, full mouthfeel, almost like steak (that’s Mangalitsa for you). It was as tender as a filet mignon. The crust the glaze created reminded me of burnt ends, with the crispy and sweet exterior and the tender ham underneath. The jerk seasoning added a nice a scotch bonnet fragrance and heat. As for the grilled fresh pineapple slices? They beat the pants off the canned pineapple many of us grew up on. 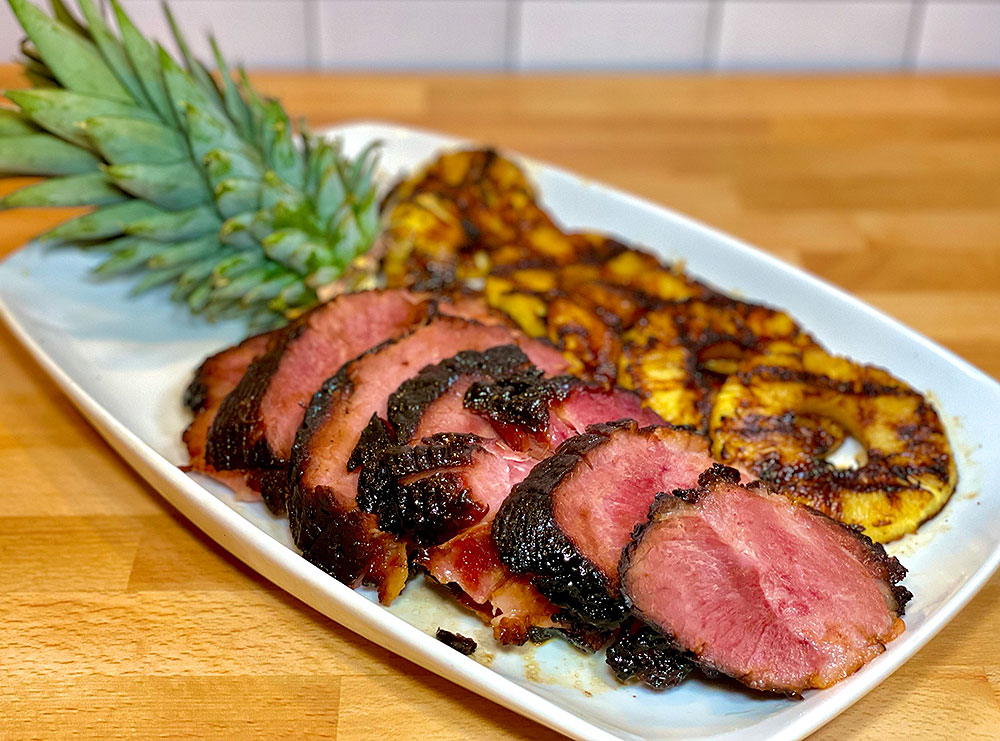 Christmas is coming and for a lot of people that means ham. This one makes a great centerpiece for a holiday dinner, buffet, or brunch. The leftovers are great for sandwiches. And who wouldn’t want to receive a Holy Grail Mangalitsa Ham as a gift.